Global development challenges, ranging from hunger and poverty to climate crisis and education, cannot be addressed in isolation. Collective and collaborative efforts are required to ensure improved socio-economic conditions for children and families the world over.

Continue to the category

July 16, 2021
Community members in Collin County have organised a drive to collect backpacks and other school supplies for children going back to school this year.

Project Rise is a philanthropic endeavour initiated by the Dawoodi Bohra community which is being implemented wherever the community resides across the world. As the name suggests, its aim is to raise and elevate the less fortunate among us. It strives to foster a culture of empathy, awareness and generosity such that no individual is neglected, overlooked or marginalised.

Project Rise deals with a wide spectrum of initiatives and activities in healthcare, nutrition, water and sanitation, environmental responsibility and conservation, and education. It endeavours to bring about an uplift in people’s lives so that they may live in comfort and with dignity.

As an umbrella initiative, the function of Project rise is twofold. It sets out to synergise the various philanthropic contributions of the community around the world, while also initiating bespoke projects under its own banner.

The inspiration for this project is rooted in the teachings of Islam and the Prophetic traditions. These exhort Muslims to strive for the betterment of others and praises selfless individuals who are willing to put the interests of the community above their own needs; clearly establishing such acts as inherent parts of faith and essential hallmarks of Islam.

The Prophet Mohammed states: ‘All creation is a family dependent on Allah. The most beloved of all creation to Him, therefore, is the one who benefits his family the most’.

Empowered by this philosophy of philanthropy, the Dawoodi Bohra community, under the banner of Project Rise, sets out to give back and contribute to the best of its abilities, endeavouring to foster positive and sustained change wherever the community is present across the globe.

‘Prefer for others what you prefer for yourself.’ – The Prophet Mohammed

Islam lays great stress upon the environmental responsibility that falls upon every Muslim. From the Prophetic tradition that exalts cleanliness as integral to faith, to the civic tenets of the sharia that forbid polluting water sources and the unnecessary felling of trees, Islam inspires an outlook that is truly comprehensive vis a vis its emphasis on conservation.

The Bohra community has long been an advocate for environmental responsibility and conservation. The bounties of nature are gifts from the Almighty and safeguarding those bounties for future generations is considered to be a responsibility that falls upon every individual. The community’s environmental awareness arm, Burhani Foundation, has actively undertaken initiatives towards a greener, cleaner world since its inception in 1992. From tree plantation drives to cleanup activities to wildlife conservation exercises, the foundation seeks to address all forms of environmental concerns.

The late His Holiness Syedna Mohammed Burhanuddin states: ‘The planting of trees is a most beneficial act for they lend beauty to the earth and bring about a downpour of Allah’s blessings.’

The most basic human need is a dependable and healthy source of sustenance and nourishment. The teachings of Islam place great emphasis on the virtues of feeding others, as the Prophet Mohammed states: ‘There is no deed greater than feeding the hungry.’

The Dawoodi Bohra community kitchen, better known as FMB, is a groundbreaking initiative envisioned and started by the late His Holiness Syedna Mohammed Burhanuddin. It has been a cause particularly close to the heart of his successor, His Holiness Syedna Mufaddal Saifuddin who has personally seen to its growth and development over the years. FMB aims to deliver one hand-cooked, wholesome meal to every Bohra household across the world, each day.

A sister initiative known as ‘Dana Committee’ complements the community kitchen by striving to ensure that not even a grain of food goes to waste. Systems are put in place so that only the required amount of food is prepared for any given occasion. If however there is excess as a result of unforeseen circumstances, the extra food is properly packaged and distributed to those who put in a request as well as those in need.

As an extension of the FMB initiative meant to reach out to the broader society, food drives are conducted on a regular basis by community members across the world. These are done either in partnership with food banks and other charities or by the community itself. Expert advice from nutritionists is shared so that people maintain a healthy diet and make the most of existing provisions so as to curb waste.

The community has also partnered with government organisations and charities in Maharashtra and other parts of India to provide specialised supplements to malnourished children in impoverished areas. Special foods are also provided to lactating mothers as well as educational sessions about the best practices to ensure healthy growth and development in young children.

‘A meal intended for one suffices two.’
– Imam Jʿafar al-Sadiq

Good physical and mental health is a blessing, enabling us to strive towards living fulfilling lives and working towards realising our potential. Access to adequate healthcare services is often limited to those who can afford it, and developing countries can be especially deficient in this regard. This leaves a substantial number of people in rural areas and underdeveloped countries without even the most basic healthcare facilities.

In an attempt to remedy this situation and make sure that more people receive proper diagnosis and treatment, especially for lifestyle diseases and the more prevalent conditions where early diagnosis is most important, the community conducts free health camps at regular intervals in both rural and urban areas. Specialist doctors and medical practitioners from within the community volunteer their time and services to the cause, often travelling to remote destinations so that as many people as possible can benefit from their medical expertise.

The Prophet Mohammed states
‘Seek treatment for Allah has not sent down an ailment
but he has sent down with it a cure.’

In a world increasingly characterised by a lack of fresh, clean water, it is imperative upon each and every individual to contribute towards water conservation while exploring new and innovative avenues of increasing Earth’s water supplies. The civic tenets of Islam condemn all kinds of waste, especially that of water. Muslims are urged to use resources frugally.

The Dawoodi Bohra community is spearheading the ‘Turning the Tide’ initiative against water pollution and also undertakes various other projects to bring fresh clean water to rural areas in India. These include the installation of hand pumps, implementation of rainwater harvesting and water reclamation practices.

Another recently implemented project strives to tackle the ever growing concerns of Monsoon failure, aggressive evaporation due to higher temperatures and depleting rainfall levels in rural India, which have greatly impacted agriculture. The project has introduced farm ponds, check dams, farm bunds and desilting equipment to maximise existing water sources and provide water security to farmers. Awareness camps are also conducted in such areas to educate the populace about proper sanitary practices as well as modern conservation techniques along with how to make the most out of existing water supplies.

His Holiness Syedna Mufaddal Saifuddin states
‘It is imperative to offer gratitude to Allah and not waste water,
the Prophet Mohammed teaches us to conserve and preserve all natural resources.’

With these initiatives and more, Project Rise looks to the future and strives to enrich the lives of as many people as it can by establishing a legacy of philanthropy that will hopefully endure and inspire generations to come.

Project Rise is an umbrella initiative by the worldwide Dawoodi Bohra community which sets out to synergise the various philanthropic contributions of its institutions and members into a unified entity. As the name suggests, its core aim is to raise and elevate society’s less fortunate in every aspect of life to such a level, that they too become empowered to do the same for others. It strives to foster a widespread culture of empathy, awareness and generosity which culminates in a society where no individual is neglected overlooked or marginalised.

Project Rise deals with a wide spectrum of initiatives and activities in varied fields including but not limited to healthcare, nutrition, hygiene, environmental responsibility and conservation as well as education. It aims to bring about a wholesome and comprehensive uplift in the lives of all humankind.

The inspiration for this project is deeply rooted in the teachings of Islam and the Prophetic traditions. These exhort Muslims to always strive for the betterment of others and exalt individuals who sacrifice their own needs for those of the collective, all the while establishing such acts as inherent parts of faith and essential hallmarks of true Islam.

The Prophet Mohammed states: ‘All creation is a family dependent on Allah. The most beloved of all creation to Him, therefore, is the one who benefits his family the most’.

Empowered by this philosophy of philanthropy, the Dawoodi Bohra community under the banner of Project Rise, sets out to give back and contribute to the best of its abilities, towards fostering positive and sustained change on a global level.

If you are interested in joining our cause please get in touch with us by filling out the form below:

We salute our #FMB @Dawoodi_Bohras Community Kitchen heroes for their tireless efforts to provide food for the less fortunate in these times of crisis. #CovidHeroes #ZeroHunger

Thank you @Dawoodi_Bohras for volunteering to help preserve our environment. https://twitter.com/Bohras_USA/status/1415018023799377920

Volunteer @Dawoodi_Bohras joined @KeepTBB & @TampaRiverWalk to help tidy up downtown #Tampa in preparation for the #StanleyCup celebrations. Clean-ups are a regular part of @ProjectRiseDB, the Bohras' global initiative to support vulnerable people & preserve the environment.

Thank you @BinaBjp for joining us at the water conservation awareness program in Jamnagar #Gujarat.

We hope that this rainwater harvesting system in our Masjid will help increase and replenish groundwater levels in the neighbourhood. 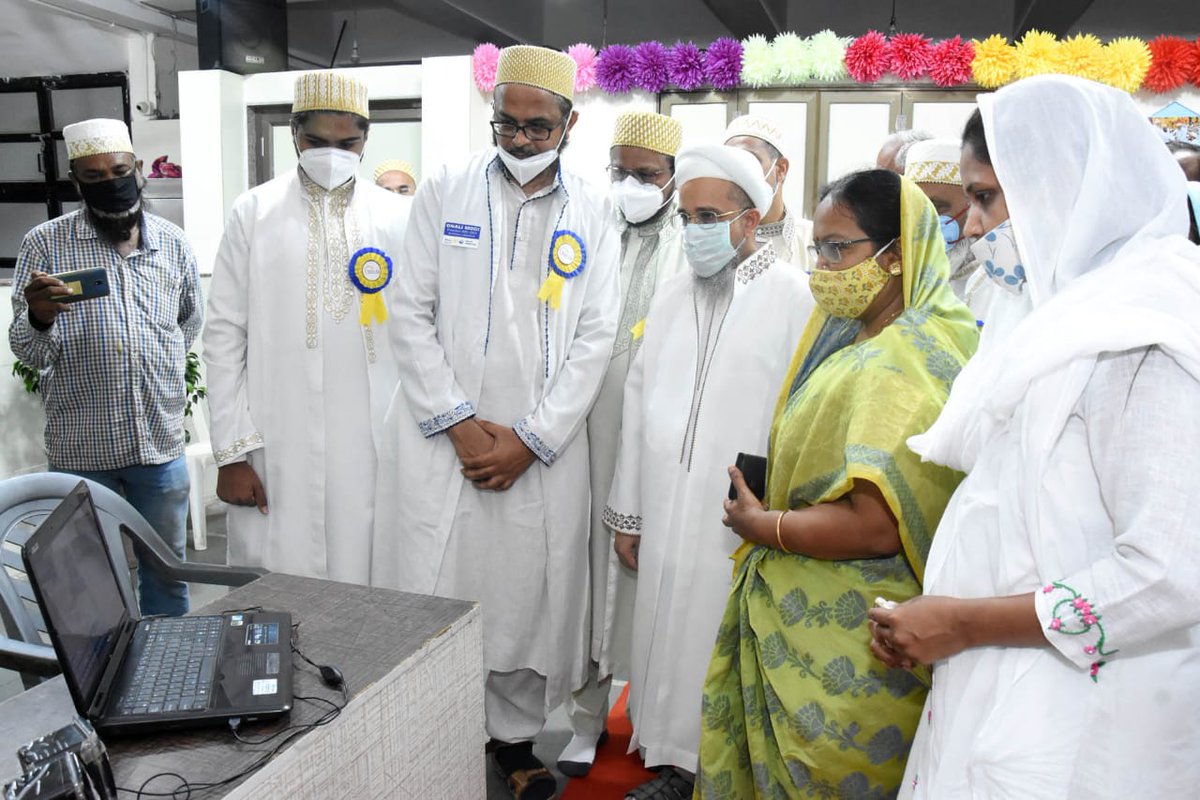 Volunteer @Dawoodi_Bohras joined @KeepTBB & @TampaRiverWalk to help tidy up downtown #Tampa in preparation for the #StanleyCup celebrations. Clean-ups are a regular part of @ProjectRiseDB, the Bohras' global initiative to support vulnerable people & preserve the environment.