Lisan al-Dawat: The Language of the Dawoodi Bohras 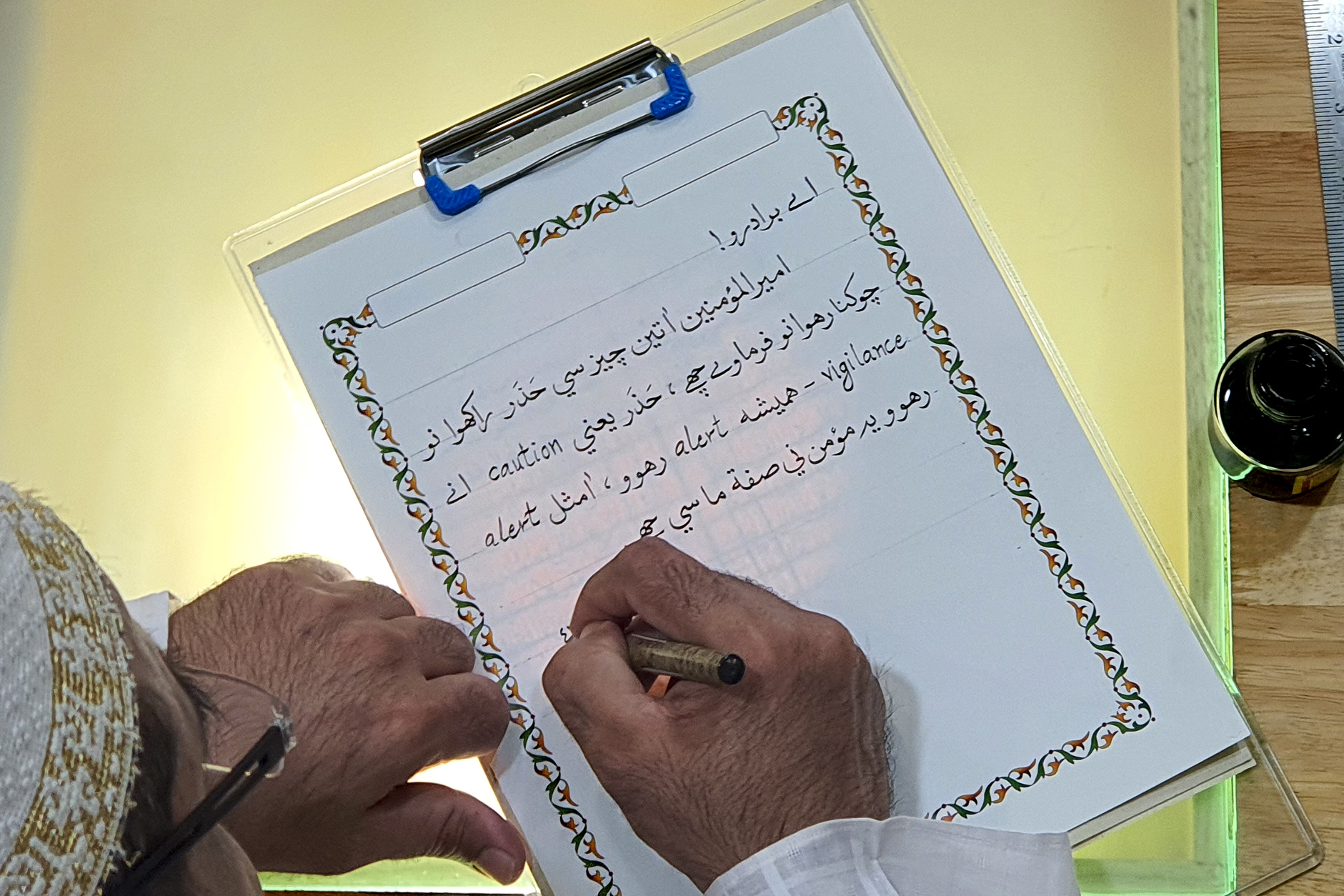 A unique cultural hallmark of the worldwide Dawoodi Bohra community is its distinctive language, Lisan al-Dawat, commonly known as dawat ni zaban. It is a language that combines elements of Arabic, Persian, Urdu and Gujarati, which began to emerge about a millennium ago, when the Dawat (mission) originally came to Gujarat, India through missionaries of the Fatimid Imams. In keeping with the community’s philosophy of blending venerated traditions with modern innovations, Lisan al-Dawat is a language that preserves the Dawoodi Bohras’ cultural and spiritual roots while continually evolving with the needs of the age.

Lisan al-Dawat takes its basic syntax and structure from the Gujarati language, but its script and a substantial part of its vocabulary consist of Arabic words. These elements give it an Islamic dimension that has facilitated the transmission of Quranic values and Fatimid heritage. For the community, it is a medium that enables it to articulate its Islamic roots while simultaneously serving as a link to its Indian heritage. Arabic continues to be the community’s lingua franca for religious scholarship and literature, but Lisan al-Dawat is its language in sermons as well as discourses and the medium of both official and day-to-day communication.

Upon the transfer of the seat of the Tayyibi Dawat from Yemen to Gujarat in the sixteenth century, there was an increased need for a medium of communication that facilitated the transmission of religious knowledge and Arabic terms specific to the Dawat; derived from Fatimi texts and originating from the Quran, a distinct language developed that incorporated these elements into the regional Gujarati vernacular. However, the seeds for this development were sown much earlier when the Fatimi Imam al-Mustansir sent the first missionaries to Gujarat in the eleventh century. A key figure among them, Maulaya Abdullah, reached Khambhat and learned the Gujarati language from the local inhabitants, acquiring great proficiency in it. These representatives of the Fatimi imam and later of the daʿi in Yemen, communicated with followers in India using regional dialects. By introducing Arabic terms into the Gujarati language to convey religious and cultural concepts, the early representatives initially and later, the India-based daʿis slowly forged the vernacular into contemporary ‘Lisan al-Dawat’.

This linguistic development can be observed from the language and style of Dawat literature throughout the past few centuries. Texts in Lisan al-Dawat from the early Ahmedabad period exhibit more similarities to Gujarati than texts today. The Lisan al-Dawat poetry of the eighteenth-century Daʿi Syedna Hebatullah al-Muʾayyad fi al-din, who was based in Ujjain, is replete with Sanskrit and Gujarati words along with Arabic. The verses of the early nineteenth-century scholar Syedi Sadiq Ali Saheb, a prolific writer of Lisan al-Dawat literature, attest to the style of Lisan al-Dawat spoken in his era and show the increasing tendency towards incorporating more Arabic in its vocabulary. The same is evident in an oft-recited early nineteenth-century poem by Syedna ʿAbdeʿali Saifuddin.

Although written records of sermons by daʿis a few decades later contain many Arabic terms, they can still be distinguished from the contemporary form. These records represent the linguistic style of the period because the language used by the daʿi is considered the epitome of Lisan al-Dawat. These sources point to a chronological trend towards greater use of Quranic Arabic, highlighting Lisan al-Dawat’s role as a bridge to Arabic.

In the twentieth century, under the guidance of Syedna Taher Saifuddin and especially Syedna Mohammed Burhanuddin, the language continued to develop, resulting in the inclusion of more Arabic words and scholarly terms into its lexicon, undergoing changes in its phonetics and reflecting contemporary culture in its vocabulary and semantics.

Since its inception, Lisan al-Dawat has not only been a medium of expression but a vehicle for the transmission of Fatimi traditions and knowledge. It is through Lisan al-Dawat that members of the community, from a young age, receive education in Quranic sciences and Fatimi theology, philosophy and literature.

Furthermore, it serves to connect its speakers with their spiritual and cultural heritage. By reflecting the culture and values of the community, the language accentuates its shared identity. Merging Arabic and Quranic elements with South Asian vernacular components, Lisan al-Dawat helps shape an identity for the community that is at once Islamic, South Asian and distinctly Dawoodi Bohra.

Today, Lisan al-Dawat is the mother tongue of the Bohra community, having flourished in the era of the late Syedna Mohammed Burhanuddin, who specifically encouraged community members across the world to speak it amongst themselves. This was especially significant in preserving the community’s culture and traditions and ensuring they are not overwhelmed by western and other cultures. Since it is the language of the daʿi and the medium of religious sermons and discourses, it strengthens the community’s ties to faith and reinforces its cultural identity.

Like any language, it both influences and is influenced by the society and culture of the people that speak it. Many Lisan al-Dawat words, though derived or borrowed from other languages, take on novel or multilayered connotations, influenced by Fatimi theology and Dawoodi Bohra culture.

For example, ashara (ten in Arabic) often refers to the event of Ashara Mubaraka in Muharram, which dedicates ten days to commemorate the martyrdom of Imam Husain. Similarly, Libas al-Anwar specifically denotes Bohra dress, which includes a saya kurta for men (saya, meaning ‘shadow’ or ‘shade’ in Persian and Urdu, refers to the outer layer of Bohra men’s attire) and rida for women, all terms with unique meanings in Lisan al-Dawat.

Though Bohras are spread throughout the world, Lisan al-Dawat connects them across continents, nurturing a sense of community and kinship.

Lisan al-Dawat is an Islamic language at its heart. In addition to using Arabic script, many Islamic concepts and Quranic terms, especially those that have no precise parallel in other languages, permeate Lisan al-Dawat. Because Arabic is encouraged within the community for reading and understanding the Quran and other spiritual texts and literature, these aspects of Lisan al-Dawat serve as a link to Quranic Arabic.

The Gujarati vernacular has had the largest influence on Lisan al-Dawat in terms of grammar and syntax. However, Sanskrit origin words are fewer in its lexicon than in contemporary Gujarati despite their structural similarity.

With regards to morphology and lexicon, Lisan al-Dawat, like many South Asian languages, has also incorporated many Persian and Urdu words and phrases into its vocabulary over the ages. The dominance of English as a global language has also seen the integration of certain English words into its lexicon.

Although it is derived from several languages, peculiarities in phonology and semantics have helped mold Lisan al-Dawat into a language in its own right. For example, Arabic and Persian nouns are often given Gujarati plural endings (as in ‘kitabo,’ [books]). Similar to trends in Persian and Urdu, many compound words are also formed by affixing Arabic root words to Persian suffixes, for instance:

Persian and Arabic noun are also applied to constructions that denote possession or qualification to create unique noun compounds and phrases such as badan-e-at’har (pure body) and haath mubarak (blessed hand).

A dynamic language, Lisan al-Dawat continually evolves with changing times and circumstances, filtering and absorbing novel words and concepts. It is, nonetheless, an anchor for the community to its spiritual roots and a mode of expression for its cultural values. In a diverse global community, their language helps the Dawoodi Bohras—whilst forging connections across borders, cultures and faiths—maintain a unique sense of identity that is their own.