Find out more about Ashara Mubaraka

Since His Holiness Syedna Mufaddal Saifuddin ascended to the leadership mantle of the community after the passing of his respected father, His Holiness Syedna Mohammed Burhanuddin in 2014, he has conducted eight Ashara Mubarakas in six countries. His inaugural Ashara Mubaraka as head of the community took place in Surat, his city of birth, in 2014 where over 100,000 individuals attended. 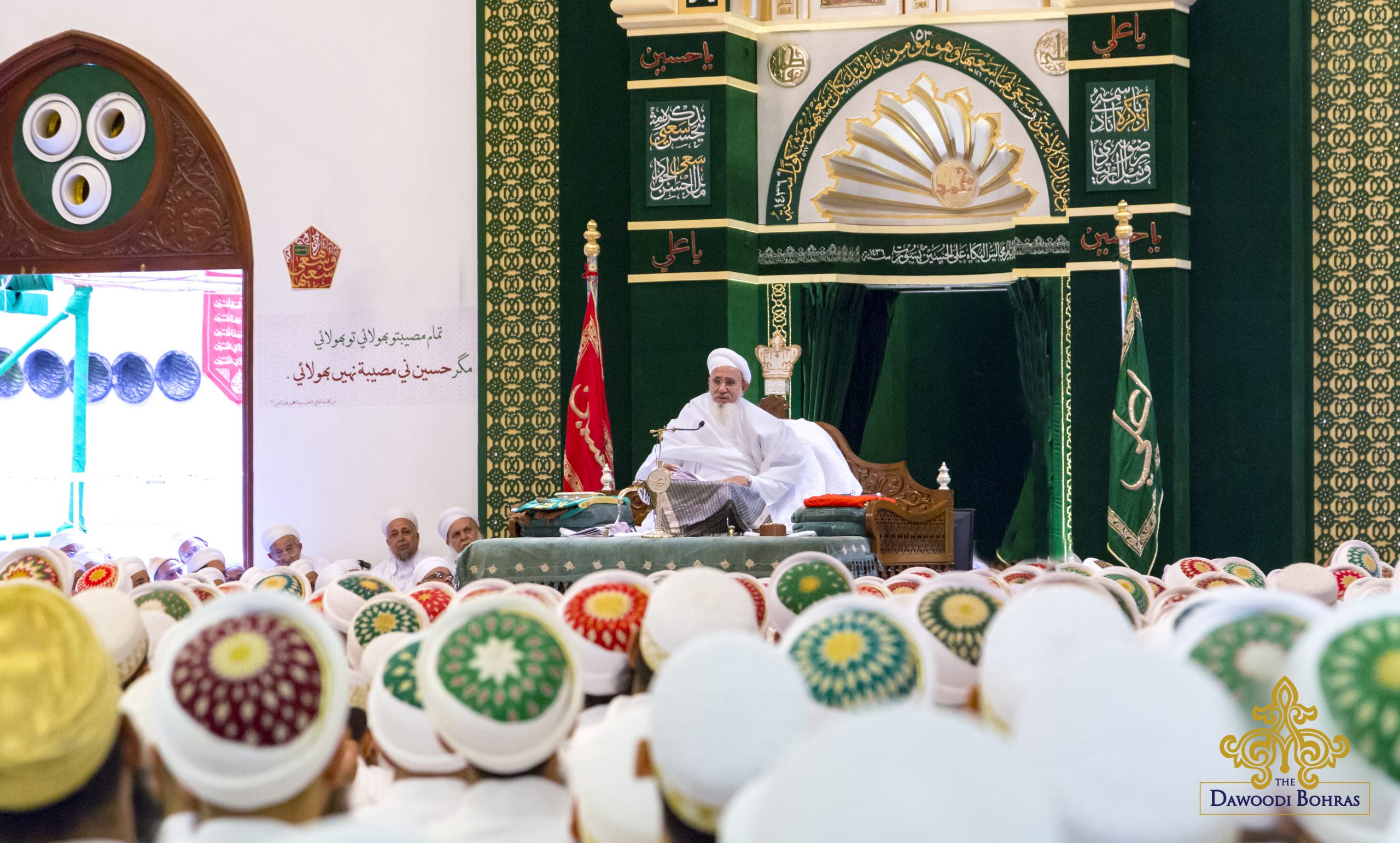 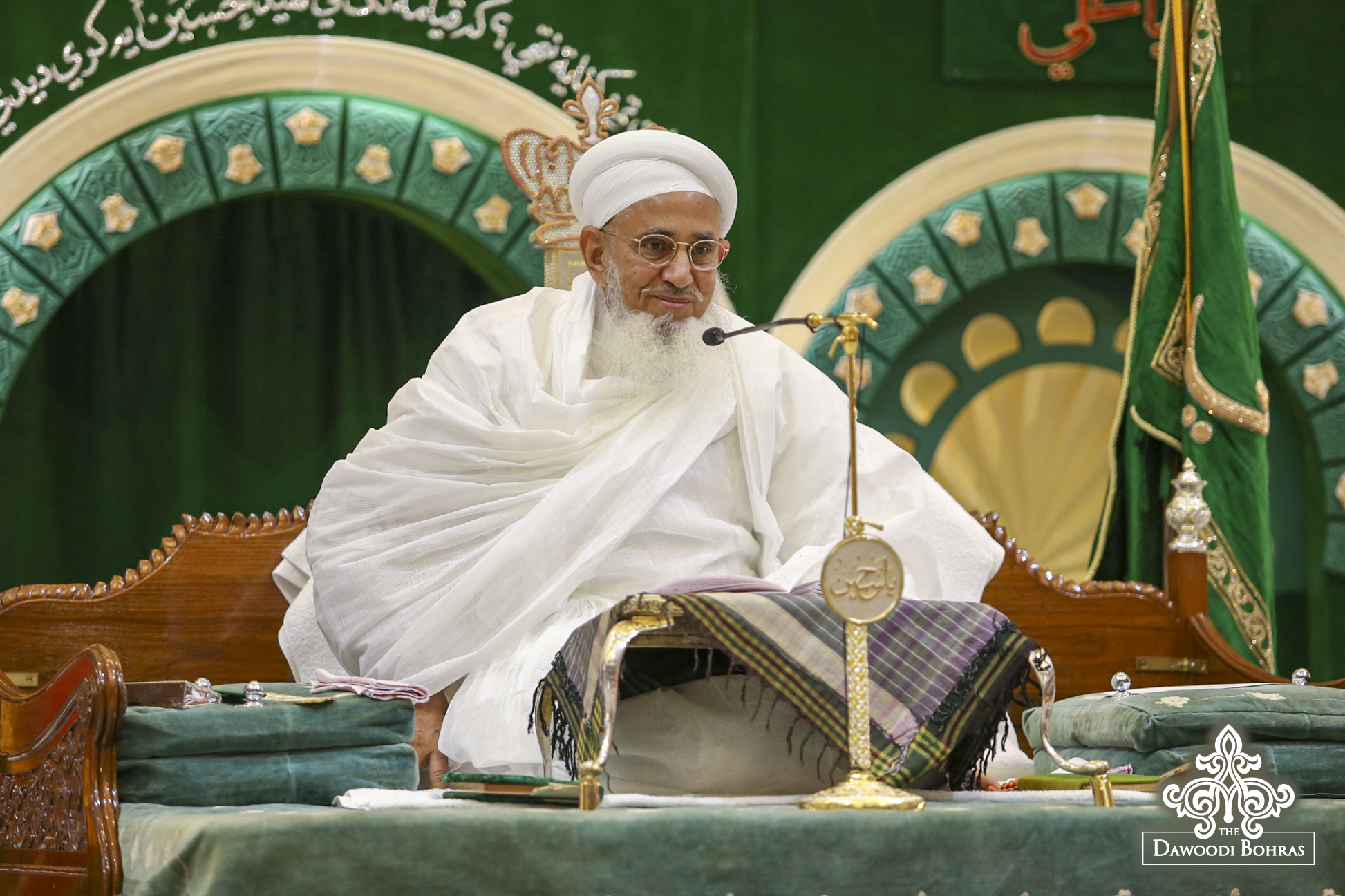 His Holiness presiding over the Ashara Mubaraka sermons in Houston, Texas

The following year, His Holiness was invited to Houston, USA, where he delivered sermons to an audience of over 25,000: the largest community event to have ever taken place in the West. The Mayor of Houston and several local politicians and leaders visited His Holiness at the masjid complex during the event as a recognition of Ashara Mubaraka’s impact on the city and in solidarity with the messages of peace, patriotism and love for all which were at the heart of His Holiness’ sermons.

In 2016, Syedna selected Dar es Salaam, the capital of Tanzania, as the venue for the Ashara Mubaraka gathering. In this historic event, over 30,000 Dawoodi Bohras attended the event making it the largest ever international gathering to have taken place in Tanzania. The influx of visitors to the city and their subsequent contributions to the tourism sector of the country proved a boon for both the local and national economies. The President of Tanzania, His Excellency John Magufuli, called on His Holiness at the Ashara venue and addressed the gathering of thousands of people. 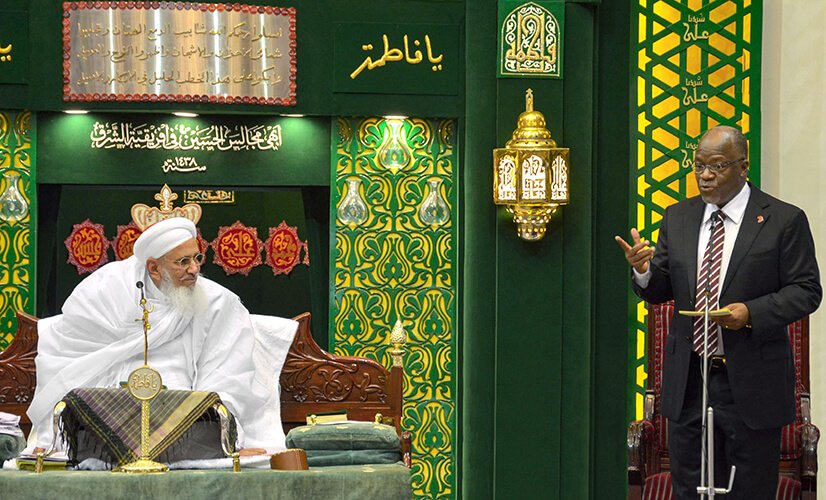 The late President John Magufuli of Tanzania visited Syedna Mufaddal Saifuddin and the
Dawoodi Bohra community during the Ashara sermons held in Dar es Salaam in 1438/2016.
He is seen here addressing His Holiness and the audience. 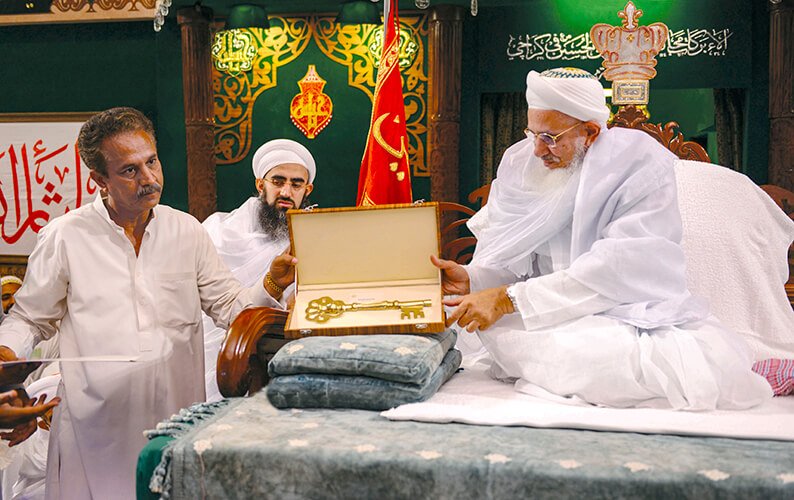 His Holiness being presented with the Key of Karachi by Mayor Waseem Akhtar during
Ashara Mubaraka 1439/2017.

The following year, in 2017, His Holiness decided to conduct the sermons in Karachi, Pakistan. Despite security concerns, 60,000 people gathered in the heart of the city’s business district where the community’s central masjid is located for the period of ten days. His Holiness’ sermons had drawn an international crowd in numbers Karachi had not seen in many years. The New York Times described the event as having sent ‘an important message’ of the return of ‘normalcy’ to Karachi. Government leaders such as the Chief Minister of Sindh, Syed Murad Ali Shah, thanked His Holiness for his continued faith in Pakistan, its government and its people, and cited the successful completion of Ashara Mubaraka as an example of the peace and stability that has returned to the city.

Ashara Mubaraka in 2018 in Indore was also ground-breaking in many ways. It saw the largest congregation of Dawoodi Bohras for the event to date, totalling nearly 210,000 people. On the 4th of Muharram, Syedna welcomed the Prime Minister of India, Shri Narendra Modi to the Ashara Mubaraka assembly in which both he and the Chief Minister of Madhya Pradesh, Shri Shivraj Singh Chouhan, participated in the majlis and addressed the gathering. The Prime Minister spoke of Imam Husain’s martyrdom and the lessons his sacrifice offers to mankind today. He and the Chief Minister acknowledged the contributions to the nation by Syedna and his forefathers, as well as the many initiatives for social welfare, economic growth, environmental conservation and education they have undertaken. 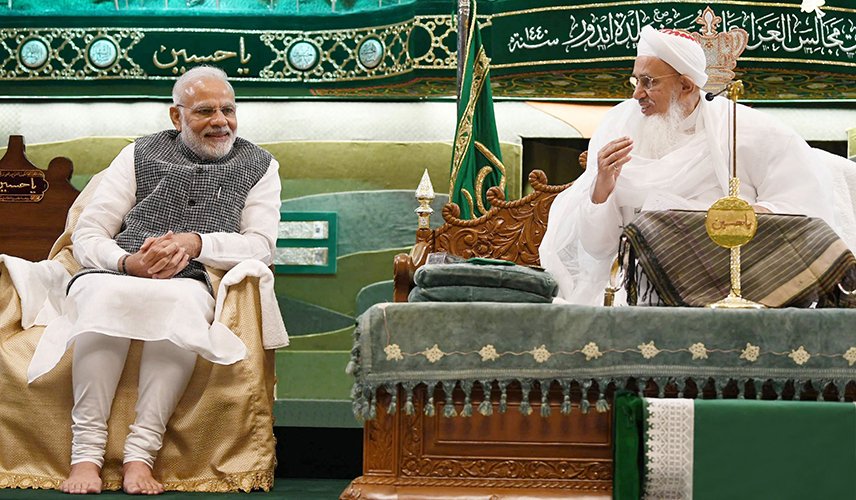 His Holiness with the Prime Minister of India Shri Narendra Modi in India during
Ashara Mubaraka 1440/2018. 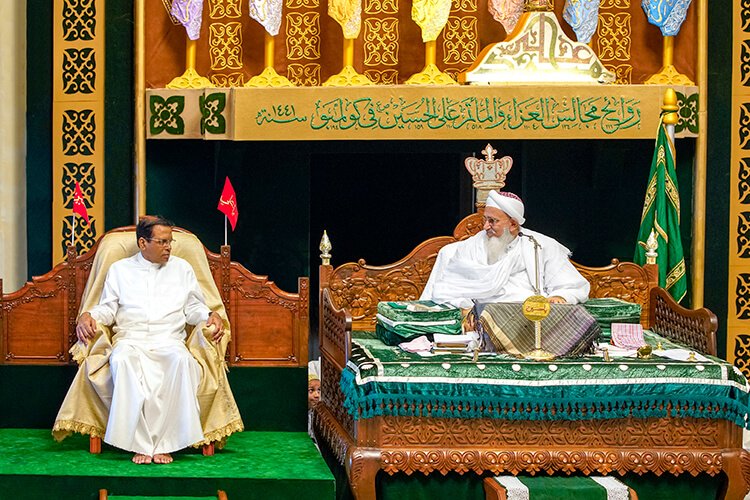 Former President Maithripala Sirisena of Sri Lanka visited Syedna Mufaddal Saifuddin and
the Dawoodi Bohra community during the Ashara sermons held in Colombo in 1441/2019. He is
seen here welcomed by His Holiness and the audience.

At the invitation of the Sri Lankan government in 2019, His Holiness chose the capital Colombo as the venue for the Ashara Mubaraka sermons. Despite terrorist attacks earlier in April that year, more than 27,000 people gathered in Colombo with His Holiness. Standards bearing the name of Husain fluttered high atop Husaini Masjid complex where the gatherings were held, communicating to the world the messages of peace, love and humanity inherent in the martyrdom of Imam Husain and demonstrating their power in healing wounds and bringing people together.

The large influx of community members helped rejuvenate Sri Lanka’s economy and was the Dawoodi Bohra community’s statement of faith and confidence in the country and the versatility of its people. Colombo has been host to Ashara Mubaraka six times in the past during the tenure of the 51st and 52nd daʿis, with the last one being conducted by the late His Holiness Syedna Mohammed Burhanuddin in 2008.

Having extended a formal invitation to Syedna to conduct the sermons in Colombo, His Excellency President Maithripala Sirisena called on His Holiness at Husaini Masjid in Bambalapitiya during the fourth sermon. His Holiness warmly welcomed the President in his address and thanked him for the support he and his government had offered while praying for peace and prosperity to prevail in the nation. President Sirisena then addressed His Holiness and the congregation thanking them for choosing Colombo as the venue for this solemn occasion and recognising the community’s message of peace and humanity.

The Ashara commemoration of 2020 was no less historic. In yet another first, and once again demonstrating the community’s ability to pull together in times of difficulty and adversity, His Holiness’ administration mobilised thousands of volunteers across the world to help individual households prepare for the ten-day event. Sermons were broadcast to every single Bohra household and hundreds of thousands of Dawoodi Bohras participated in this event in a manner never witnessed before. Syedna presided over the event at his own residence in Khandala on the outskirts of Mumbai with his close family, but was very much present in the homes of his followers across the world.

Community members observed Ashara Mubaraka in 2020 within the safety of their homes.

In 2021, Syedna Saifuddin chose the Nairobi campus of Aljamea-tus-Saifiyah as the venue for Ashara Mubaraka. The event was historic in many aspects as it marked the first time that Ashara Mubaraka was hosted by Aljamea-tus-Saifiyah, the community’s premier educational institute. Students and faculty of Aljamea, local community members and a limited number of international guests observed the occasion in strict compliance with Covid-19 protocols including full vaccination, mandatory quarantine, social distancing and regular testing. Syedna’s sermons were also relayed live to numerous locations in Eastern and Central Africa where small groups of community members gathered in compliance with local Covid-19 regulations to partake in the blessings of this auspicious and historic event.

In 2022, Syedna Mufaddal Saifuddin selected London, United Kingdom, as the venue for his Ashara Mubaraka sermons. Nearly four decades in the making and with several years of preparation in place, His Holiness’ announcement was welcomed with great fervour and enthusiasm by the British Dawoodi Bohra community and the international team of volunteers who attend every year. As the first ever Ashara Mubaraka to be hosted in the United Kingdom and the whole of Europe, the event marked the fulfilment of His Holiness’ respected father, Syedna Burhanuddin’s long standing aspiration for this most significant event to take place in London. The city had always held a special place in His Holiness’ heart, not least because it is where his beloved wife, Amatullah Aisaheba, is laid to rest. The London borough of Northolt houses Husainy Masjid in the Mohammedi Park gated community, a centre for nearly 800 Dawoodi Bohra families in the area and the venue for this year’s momentous gathering.

Ashara Mubaraka London was a milestone in the history of the Dawoodi Bohra community. Despite the complexities of peak summer travel and visa requirements for many travellers, more than 12,500 community members were able to attend this historic event in London and participate in the commemoration of Imam Husain’s sacrifice with His Holiness. In order to meet various health and safety requirements and to ensure the most comfort for attendees, a number of consultancy agencies and event management firms were brought on. Ashara Mubaraka London, was a remarkable example of how community volunteers and hired professionals can come together to organise high-attendance, international events, efficiently and within a short period of time. Thanks to tremendous assistance from various Offices and Ministries within the British government and support from a wide variety of local councils, neighbourhood organisations and well-wishers, the event was a huge success. 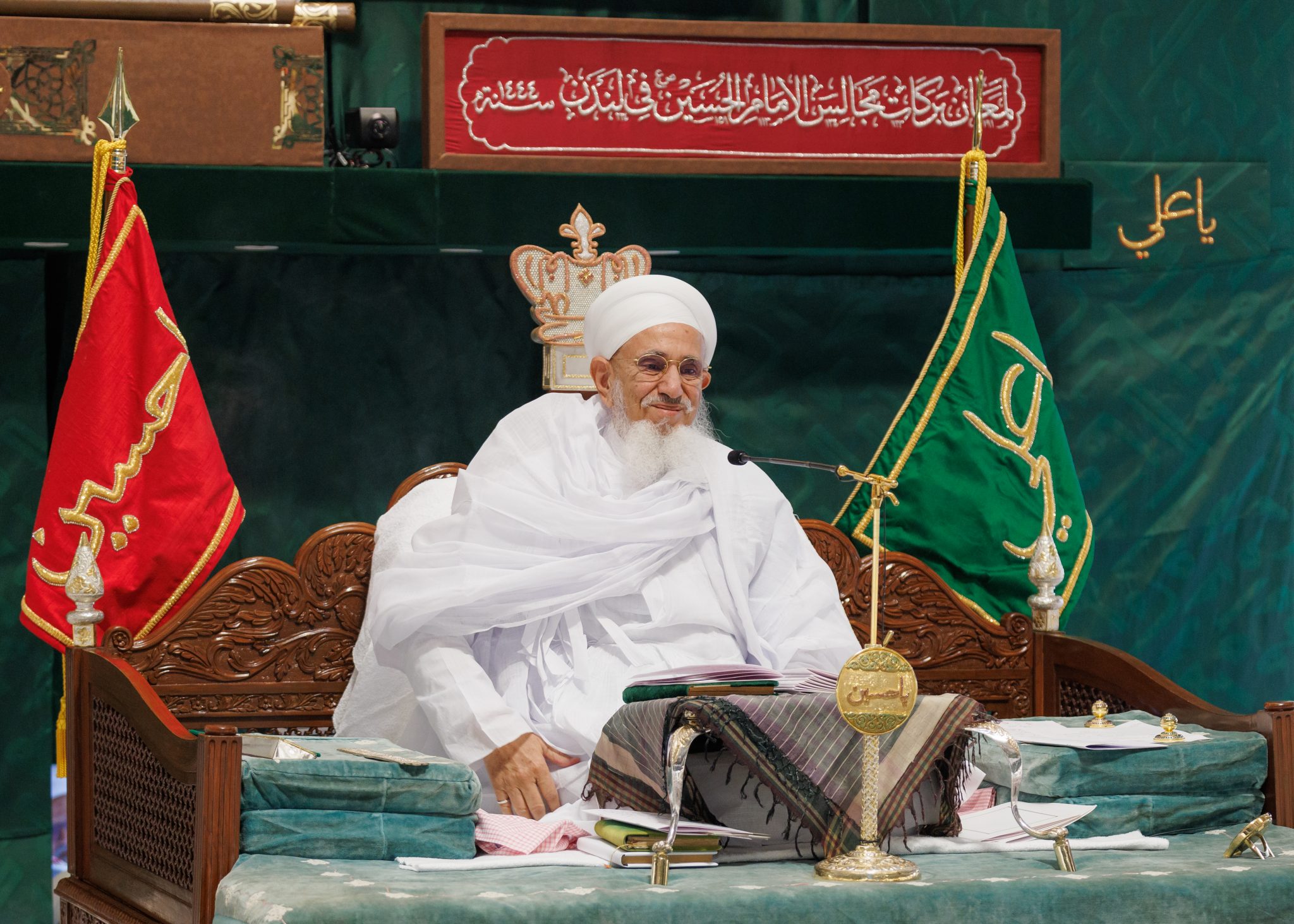 Find out more about Ashara Mubaraka