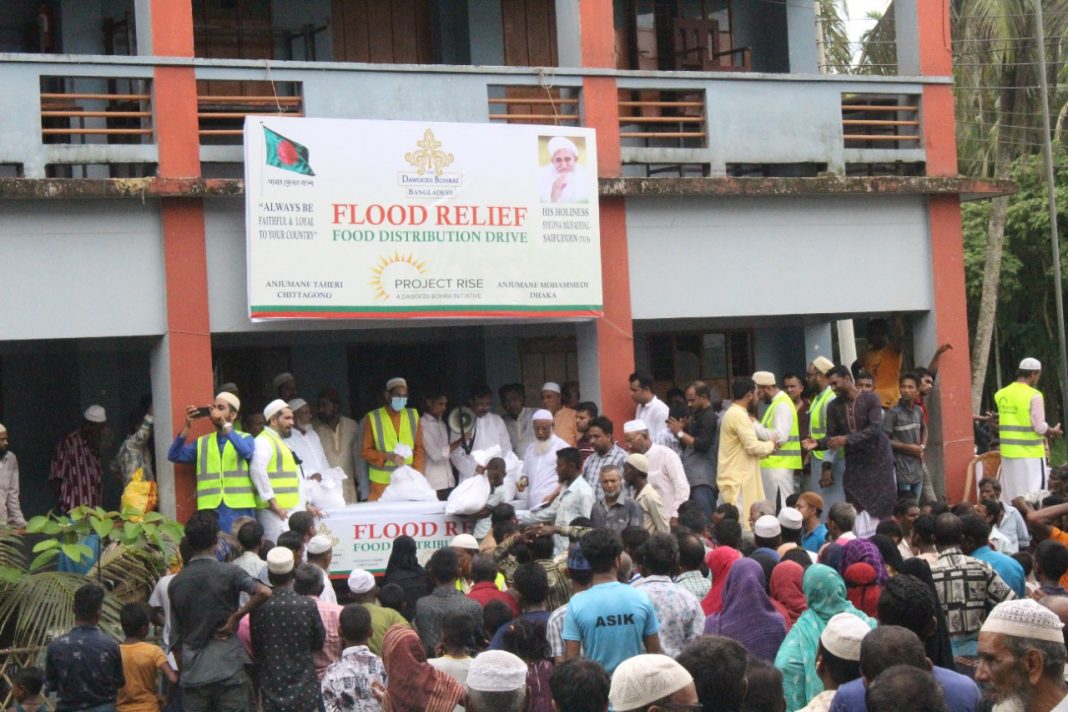 What used to be nearly 840 mm of average rainfall in the month of June has nearly doubled in the Sylhet region of northeastern Bangladesh as it received a staggering 1500 mm this year. The torrential spells have submerged parts of the region leaving its population in dire conditions.

In a country where nearly two-thirds of the landscape is less than 15 feet above sea level, scientists have issued stark warnings of the country facing a direct threat from rising sea levels caused by climate change. An article in the journal Scientific American states, ‘climate change in Bangladesh has started what may become the largest mass migration in human history.  Some scientists project a five-to-six foot [sea-level] rise by 2100, which would displace perhaps 50 million people.’

The mitigation of such climate related disasters is a shared responsibility. In the wake of the current disaster in the Sylhet region which has left millions on the brink of starvation, the Dawoodi Bohra community in Bangladesh reached out to people of nearly twenty villages to extend their support in this critical time. Ten volunteers from the capital Dhaka and four from Chattogram (Chittagong) drove to the region with a truckload of food rations to distribute among the displaced masses.

A team from the Finance Minister’s office supervised the distribution service held at Jangail Jame mosque. The team catered to nearly 700 families from in and around the Kandigaon region distributing one sack per family consisting of essential items such as salt, rice, masoor dal, potatoes, onions, Soya bean oil and orsaline.

Qaizar Hamid, a volunteer said, ‘There was flood in the Sylhet region since last month and this is the first time that the flood water was not receding and due to this, approximately 3 million people have been rendered homeless and as many as 40,000 houses have been destroyed. In light of this, our Project Rise team approached the honourable Foreign Minister to provide help from our end and are thankful for the support extended by his team to carry out this activity.’

The food distribution drive was conducted under the banner of Project Rise – the Dawoodi Bohra community’s global philanthropic arm that looks to make positive interventions across different focus areas in alignment with the United Nations’ Sustainable Development Goals agenda. Even before the founding of Project Rise, community members in Bangladesh have been actively intervening in the face of disaster. During the floods of 1988 which wreaked havoc on people living in the low-lying areas of Manikganj, community members mobilised to distribute essential ration kits to families affected by the flooding.

More recently, when the country was gripped by the Covid 19 pandemic, community members gathered at the community kitchen and undertook several food drives to provide cooked meals to those in need.