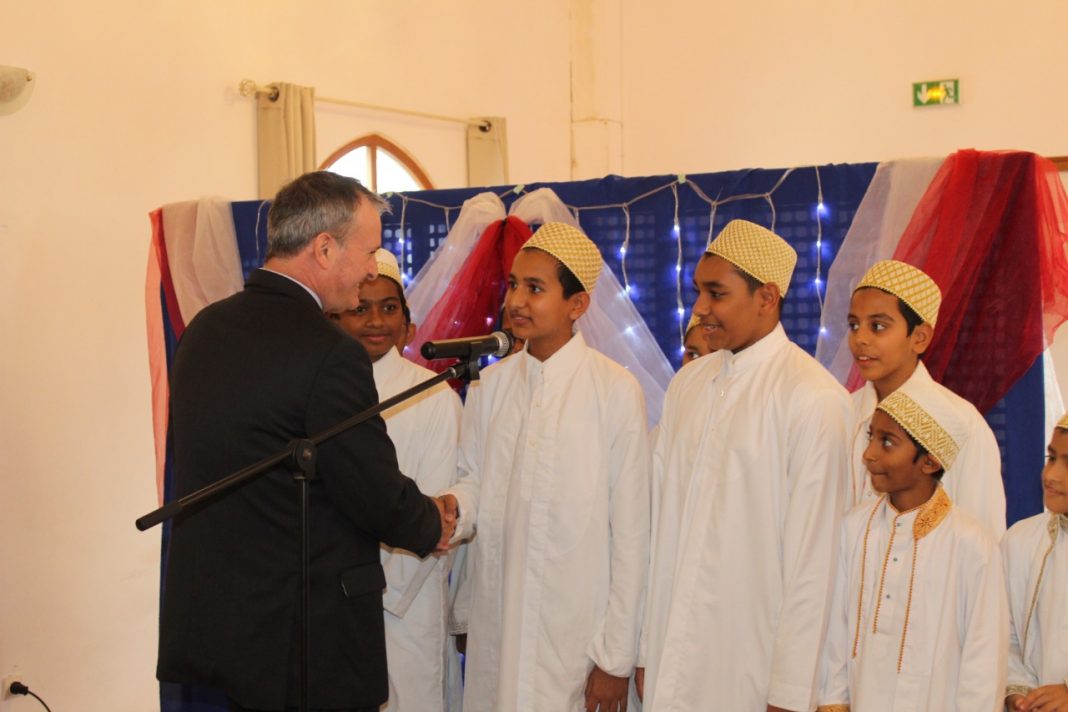 On the 19th of July 2022, the Dawoodi Bohra community of Réunion welcomed the Prefect of the Island, Mr Jacques Billant to the construction site of their new masjid at Duparc, St-Marie.

After being greeted by children from the community with a bouquet, the Prefect was given a tour of the masjid complex. Chief Architect Sarah Stacoff led the way as she explained different architectural concepts within the masjid’s construction. The Prefect was accompanied by a delegation consisting of his Head of Office, Ms Parine Lacombe; the Mayor of Sainte-Marie, Mr Richard Nirlo; Head of Municipal Police and other dignitaries, all of whom showed keen interest in the ongoing construction work.

The tour was followed by a video presentation of the Dawoodi Bohra community’s history, culture and contributions to society. Moiz Jamali, the President of the Dawoodi Bohras in Réunion explained the community’s various initiatives, including the community kitchen known as Faiz al-Mawaid al-Burhaniyah (FMB), the Happy Threads women’s empowerment programme and Project Rise, the community’s global philanthropic endeavour. He was particularly pleased to learn that the Réunion community had been felicitated with an award for its achievements by the Project Rise head office in 2021.’

In his remarks, Mr Billant appreciated the fact that the community in Réunion had integrated so well into Réunion’s society and acknowledged the various outreach programmes organised by the community during Covid-19. He thanked the community for their hospitality and pledged the support of the Prefecture in organising a visit to welcome the community leader, His Holiness Syedna Mufaddal Saifuddin.

The Dawoodi Bohra community of Réunion consists of 430 families who have been living on the island since the 1960s with the first settlers coming as far back as the mid-19th century. Most community members run successful businesses and industries and strive to play an active role in the socio-economic development of Réunion.