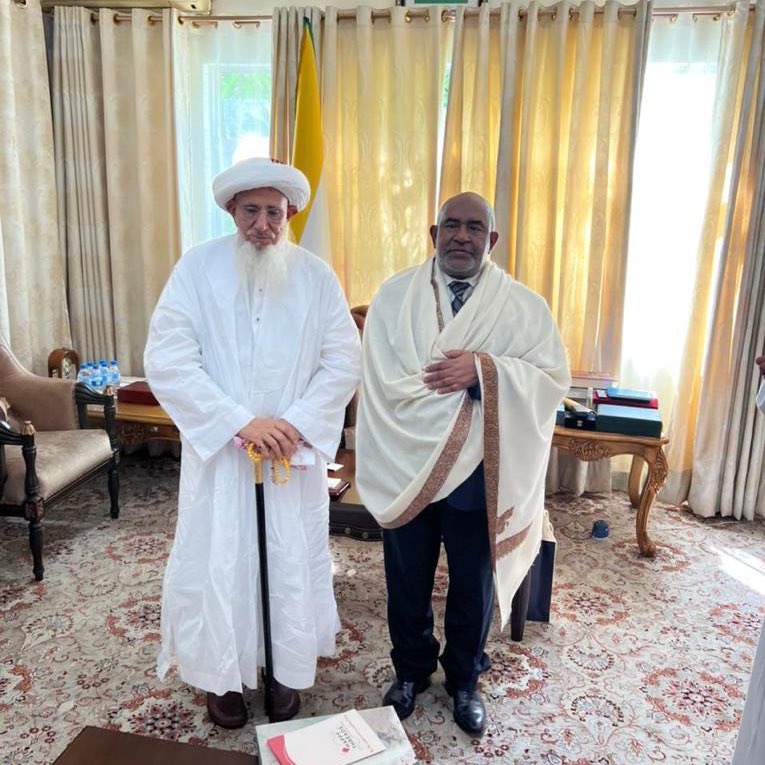 His Holiness Syedna Mufaddal Saifuddin arrived at the Comoros on the 12th of June 2022. He was received at the airport on behalf of the President by the Minister of Justice and Islamic Affairs, Mr Djae Ahamada Chanfi and the Minister of Interior and Information, Mr Mahamoud Fakridine. In his welcome speech, Mr Chanfi spoke of the long standing ties between Comorons and the mercantile Indian community living there. He thanked His Holiness for coming to the Comoros saying that, ‘Whilst you are in the country, you are at home.’

The next day His Holiness met and interacted with community members addressing them in an hour long discourse at the community centre in the ‘Chateaux’ area located in the heart of the city.

On the 13th of June, His Holiness called upon the President of the Comoros, His Excellency Azali Assoumani, who received him at the Presidential Palace Beit-Salam in the presence of the Grand Qadi, Mohamed Said Athoumane. His Holiness remarked on the role of religion in maintaining peace and security. The President took the opportunity to discuss his vision of making Comoros an emerging country by 2030. His Holiness expressed his support for the president’s vision by making a contribution to the country’s health sector, namely; the improvement of medical facilities and the scaling up of operations at El-Maarouf University Hospital, particularly the Dialysis centre.

The Dawoodi Bohras inhabit two islands of the Comoros; Grand Comore and Anjouan. The latter was the first settlement of the community which is still home to 5 families who congregate at a more than 150 year-old masjid. The community in Moroni is currently home to 22 families which are all involved in business activities. They deal primarily in hardware, electric tools and household items.