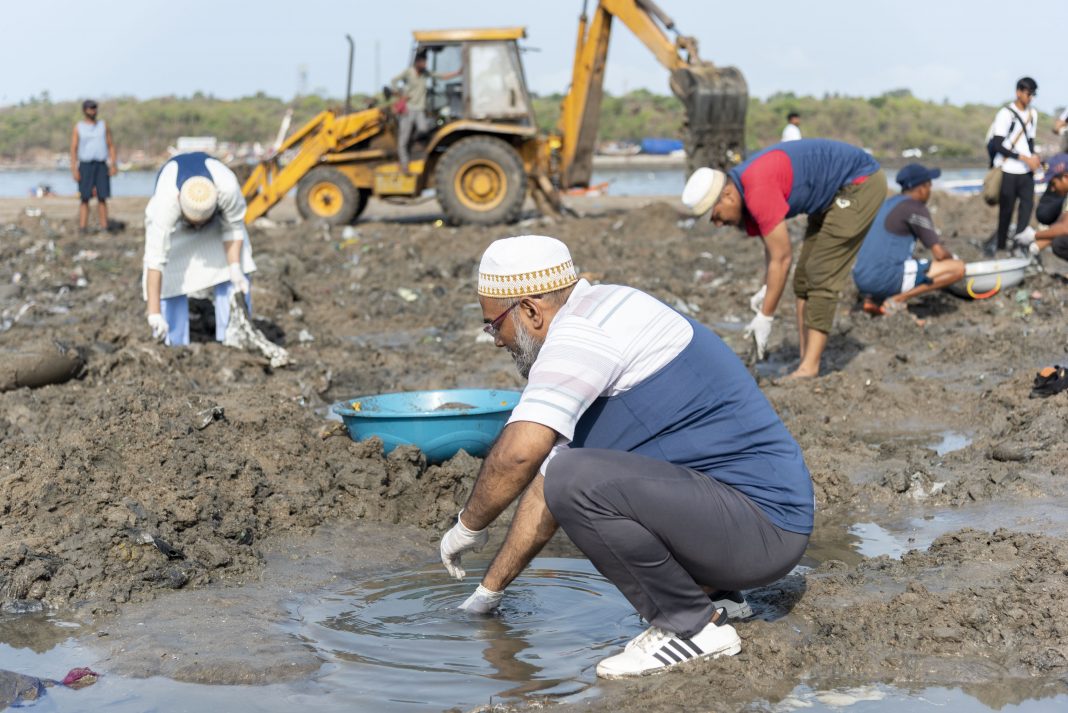 Among 1500 environment enthusiasts who arrived to clean Versova beach alongside UN Champion of the Earth Afroz Shah on World Environment Day, Sunday, were 800 members of the Dawoodi Bohra community. Half that number were women. Dressed in the classic rida, they unflinchingly picked up waste plastic bags, pouches and bottles, emptied them of sand and binned them for the BMC to cart away and dispose of. Qaidjoher Ujjainwala, representative of His Holiness Syedna Mufaddal Saifuddin in Mira Road, said, ‘The oldest lady was 80 years old. When I asked how she would handle the strain, she said she would work at a slow pace. So she chose a single spot and stood there, diligently extricating each piece of plastic buried beneath the sand:’ As early as 6.00am the Bohra participants were transported to Versova in special buses from South Mumbai, Bhayander (W), Kandivli even far off Mira Road and Nalasopara. They laboured under the summer sun from 7.30 AM through 10.30 AM.

The cleanup was preceded by a 6 km run along the beach titled ‘Run for the Oceans’ – a global campaign championed by sportswear major Adidas. Adidas has promised that “for every 10 minutes of running, or other running-based sports such as tennis or soccer, Adidas and Parley will clean up the equivalent weight of 1 plastic bottle—up to 250,000 kg / 500,000 lbs”.

The Bohra community’s Burhani Foundation set up by Syedna Mohammed Burhanuddin in 1992 is an active champion of environmental causes. This cleanup was part of the foundation and their Project Rise initiative. Ujjainwala said, ‘The fight against plastic pollution is an enormous task but we need to take collective and continued steps to make a difference. It is the shared responsibility of individuals, religious communities, businesses and governments to respond to this urgent call to protect the nature that we all depend on.’

The group had nearly 100 students including faculty members from the Marol branch of Aljamea-tus-Saifiyah, the community’s premier seat of learning. Mustafa Feeroz, a professor at the university said, “As any parent knows; it’s not easy to get teenagers up on the best of days but Sunday of all days! But once on the beach, they were full of energy in cleaning and running and the smiles of satisfaction are yet to leave their faces!”

Amongst the attendees were also students from Raudat al-Quran, a community school in South Mumbai. Murtaza Madha, a teacher, said, “This was an eventful Sunday for the students. In addition to the cleanup, some students made conversation with local fishermen, asking them about their work and what they do with their Nylon nets when they become unusable. It was heartening to see their curious minds at work like this”.

Mira Road teacher Tasneem Shabbir was a first-timer in this drive. ‘So far I had only taught about the world’s oceans but today I realised how I can help mitigate the disaster and also generate less plastic waste,’ she said. They unanimously agreed that plastic was the single most prevalent waste item they fished out. Tasneem Shabbir said, ‘Once you realise that a single plastic bag you dispose of takes a thousand years to decompose, it can strike the conscience and force you to reduce usage.’

The Bohras were all praise for the organisers led by Afroz Shah who not only requisitioned gloves and sanitation equipment for thousands of participants but also arranged breakfast on banana leaves, with ‘zero waste’ outcome. ‘Even the glasses were made of biodegradable material, not plastic,’ said Ujjainwala. Afroz Shah recalled that Syedna had invited him for a meeting some years ago and assured him of the Bohras’ long term commitment. ‘They were by our side during the Mithi River cleanup too,’ he said. Ujjainwala cited the Bohras’ partnership in the Dani Pani beach sanitisation activity also.

The BMC squad was led by Prithviraj Chavan, assistant municipal commissioner of K West ward. He assured citizens of a vigilant and cooperative administration that would ensure that Versova beach remained clean. ‘Afroz Shah has been conducting this initiative consistently. This time I was happy to partner in the activity. It is only when government officials, activists, NGOs and individual citizens work in a united way, hand in hand, that we will achieve the desired results and sustain them,’ Chavan pointed out.