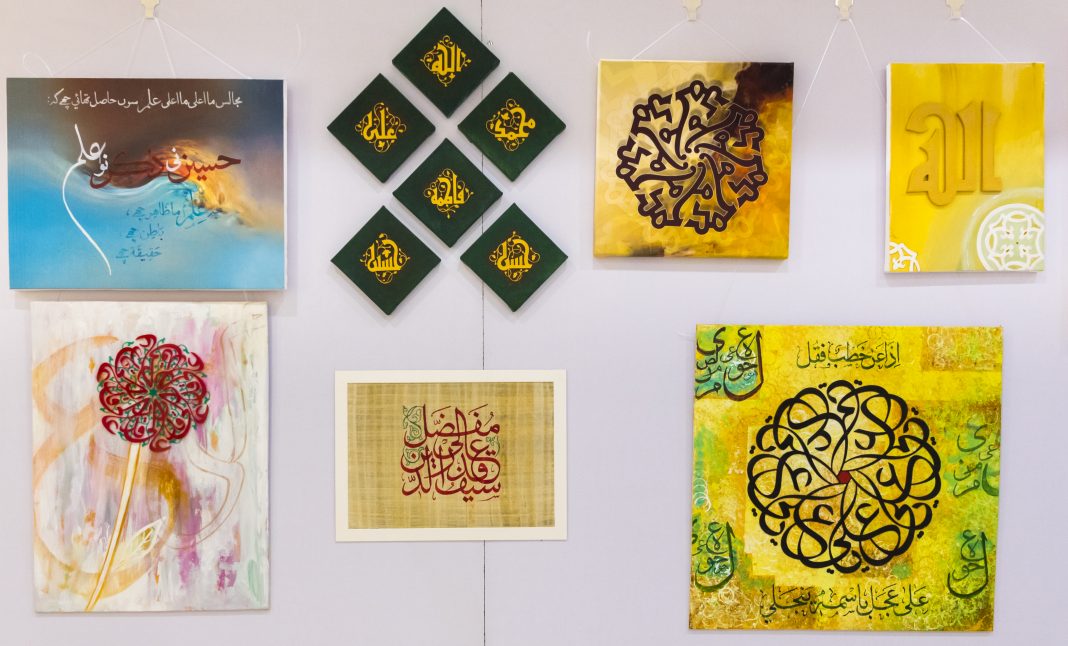 The art of Islamic calligraphy is a significant and symbolic component of the material culture of the Dawoodi Bohra community. Inspired by Fatimi philosophy, art and architecture, many Dawoodi Bohras today continue to learn and practice calligraphy, with a focus on the Arabic language and script.

Calligraphy, the visual art of producing decorative handwriting with special pens or utensils, gives form to words and letters skilfully and harmoniously. Although it is a form of writing— a mode of communication— its general purpose is to produce aesthetically pleasing artforms that evoke an emotive response in the viewer.

The prevalence of calligraphy in Islamic art reflects the centrality of written text in Islam. As the Prophet Muhammad said, “The first thing Allah created was the pen.” The development of Islamic calligraphy, or the practice of artistic handwriting and calligraphy in Arabic or an Arabic-derived script, is closely connected to the Holy Quran, with Islamic calligraphy largely based on writings and inscriptions of Quranic verses. Venerated as a sacred art which makes the words of the Quran manifest, Islamic calligraphy is considered a visible expression of Islamic spirituality.

Calligraphy in Fatimi Philosophy and History

In Fatimi philosophy, writing, like speaking, is produced by a spiritual faculty unique to humans; it is a way to preserve and safeguard the knowledge conveyed by the spoken word. Among all languages and scripts, the Arabic language and alphabet, in which the Holy Quran was revealed, is considered to be the most complete; the form of each letter holds wisdom and meaning.

The philosophy of the Islamic art of calligraphy for the Dawoodi Bohra community is inspired from Fatimi philosophy. Emphasizing the importance of skillful and beautiful writing, Imam Ahmed al-Mastur states in the Rasail Ikhwan al-Safa that, because the Arabic language and script is necessary to recite and understand the Quran, the source of all knowledge, it should be written only in the most exquisite, precise and perfected handwriting.

Similar to a musical composition, describes the Imam, the foundation for the art of calligraphy is harmonious proportion. When each letter and word is skillfully and proportionately produced, the result is beautiful handwriting that achieves its purpose in creating an impression on the minds and souls of its beholders.

This philosophy of Islamic and Arabic calligraphy emerged distinctly in Fatimi-era writing. In addition to writing in manuscripts and documents, inscriptions of Quranic verses were used to adorn masjids and other structures in the Fatimi era, as in other Islamic societies throughout the ages. In Fatimi Cairo, calligraphic inscriptions took the form of prominently displayed public texts etched into architectural structures, especially masjids and city gates, as well as on coinage and ceremonial robes and garments. Fatimi architecture, especially, is celebrated for its distinct, resplendent Kufic inscriptions, often foliated, as well as its novel epigraphic forms and designs.

Al-Jami al-Anwar, the masjid of the Fatimi Imam al-Hakim, is noteworthy in its visually prominent inscriptions in signature Fatimi Kufic spanning its monumental portal, minarets and outer and inner walls. On the interior, especially, Quranic inscriptions became the dominant decorative art embellished by other arabesque designs, from floriation and vegetal scrollwork to geometric patterns.

These calligraphic inscriptions, through their permanence, placement, artistic form, and semantic content both conveyed meaning and provided an aesthetic experience for beholders. They became symbols that unified the public under the prosperity of Fatimi rule and, for Muslims, created an environment of Islamic spirituality — in addition to the deep spiritual meaning the inscriptions held to followers of the Imams.

Such historical art and its philosophy inspires the Bohras’ study and practice of Islamic calligraphy.

Islamic calligraphy, a Quranic art, is an important constituent of Dawoodi Bohra material culture. The devotional inscriptions in Arabic calligraphy on Dawoodi Bohra masjids, like their architectural design, are largely styled after Fatimi-era epigraphs and motifs, conveying both a sense of cultural identity and creating an atmosphere of spirituality and worship. Additionally, the Bohras have used calligraphic inscriptions, utilising a variety of scripts, to adorn shrines of the Prophet’s Ahl al-Bayt in Egypt, Iraq, and Jordan as well as community structures and educational institutions such as Aljamea-tus-Saifiyah.

Inspired by the Fatimi philosophy of writing and calligraphy, many Dawoodi Bohras today endeavour to learn the art of Islamic calligraphy. Mahad al-Zahra, a branch of Aljamea-tus-Saifiyah (the community’s premier educational institute) dedicated to the memorisation of the Holy Quran and the study of its arts and sciences, houses a Quranic Arts department that provides instruction in the art of calligraphy. Students of Aljamea practice calligraphy in various forms, including copying Fatimi manuscripts, an age-old academic practice, and learning decorative inscriptions utilised in preparing tazyeen, or decoration for masjids and other centres during religious events.

Events such as the annual sermons of Ashara Mubaraka, which commemorate the martyrdom of Imam Husain, feature elaborate elements of tazyeen, especially in the gatherings presided over by the Dawoodi Bohra leader, Syedna Mufaddal Saifuddin. In addition to the elaborate central backdrop, green and red banners drape the overhead surroundings of the entire masjid, bearing golden inscriptions of Quranic verses and poetic verses from Fatimi literature associated with the sorrowful events of Karbala. These decorative and calligraphic elements create a powerful visual and emotive atmosphere of Islamic spirituality and of mourning. Through both aesthetic form and through their meaning and depth, the calligraphic inscriptions of Quranic verses and literary excerpts reinforce for its viewers that the sacrifice of Imam Husain was for the sake of the principles of Islam and humanity.

Recent years have seen further development in the design and inscriptions of tazyeen, as well as new enthusiasm for the art of Islamic calligraphy amongst community members of all backgrounds. Initiatives such as Radiant Arts have helped provide a widespread platform for the study and practice of calligraphy and other Islamic art.

The art of calligraphy has a unique spiritual impact on the Dawoodi Bohras. Individual letters, when executed with skill and care and joined together in harmony, achieve their purpose to form a beautiful script that affects the souls of its beholders, reminding the human beings who so carefully form them and gaze upon them to work together in harmony to positively impact the lives of those around them.