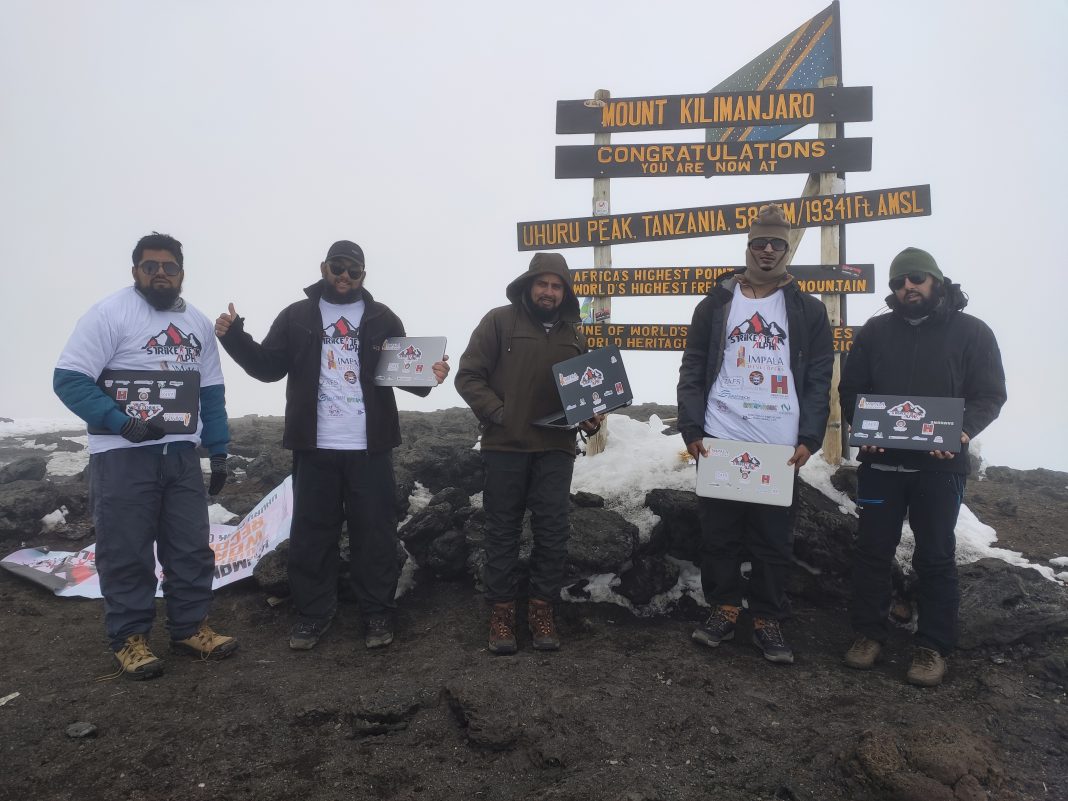 A team of five young Dawoodi Bohras who identify themselves as ‘Strike Team Alpha’, achieved the recognition of a Guinness World Record in the ‘highest altitude LAN party on land’ category. The group hails from Kenya and scaled Mount Kilimanjaro in Tanzania which is 5894m above sea level, to achieve the feat. In this piece, we ask Hatim Kaka, a member of the team, to share insights about the entire journey, right from preparations to reaching the peak.

How did it all begin?

Our journey began with a Youtube video back in 2014. Linus Media and Tec Syndicate set the world record for the highest altitude LAN party on land in June 2014 on Mt Colorado at an altitude of 4406 meters (14,4555ft). One of our team members, Huzaifa Hassanali, was a fan of their content and that is where the seed was sown.

What is a LAN party and why did you choose this as your path to Guinness World record glory?

A LAN party is a gathering of people with computers or compatible game consoles among whom a LAN (Local Area Network) connection is made, which enables them to play multiplayer video games together using a router or a switch.

What went into preparing for this feat?

Training for the attempt was in two parts for us:

1. Climbing Mt Kilimanjaro to Uhuru Peak at 5895m – a feat not everyone achieves when doing the climb.

2. Hosting a LAN party there – in conditions that were significantly less than ideal.

According to the Guinness guidelines that we had received; in order for it to count as a LAN party, the attempt should be an uninterrupted one hour session. This significantly raised the bar for the record attempt.

We trained daily for the physical hike – running, hiking steep hills and going for long treks with our laptops and tents to simulate the hike on Kilimanjaro, often forcing ourselves to set up a LAN party and pitch tents when we had just reached the peak of a mountain without rest to simulate breathless conditions we expected to find at Uhuru Peak.

We conducted several LAN parties in meat lockers and cold rooms in full gear to practice how we would function with thick gloves on as well as test our equipment and its insulation so it would last the full hour. Having three engineers and an IT specialist in the group goes a long way in making this really simple.

Tell us about the actual journey, conditions and the rest of it up top.

We started the climb to Uhuru Peak early on 1st January, 2022, from Kibo Camp and reached it at about 8:30 AM. Tired, sleepy, hungry, cold and with breathing difficulties; we set up our tents, cameras, laptops, power supply and sat down for the longest hour of our lives.

We played the game counter strike v1.6 – an old time favorite – for one hour and took the recordings, signatures from our specialist witnesses and the measurements Guinness required to authenticate our attempt. Once the hour was up, the first thing on our minds was celebration! All we wanted was to wind down and relax. We took our pictures in front of the Uhuru Peak board and started back down to base camp. Most hikers stay at the peak for about 15-30 mins before heading back down. We stayed at the peak for over 4 hours!

We started the long hike back to Kibo at about 1 PM. As we slowly descended the mountain, conditions gradually improved, the numbness was replaced by the realisation of what we had actually managed to do!

And what were the official proceedings to apply for the citation of the record?

When we got back to Nairobi on 3rd January, 2022, we sent the evidence to the Guinness Book of World records as they had requested and awaited the verdict. After two months of waiting, they finally sent us an email congratulating us on being the new world record holders of the Highest Altitude LAN party on land! And what a great feeling that was! All those grueling months and hours of grinding and endurance had paid off and we had managed to do what few ever do – break a World Record!