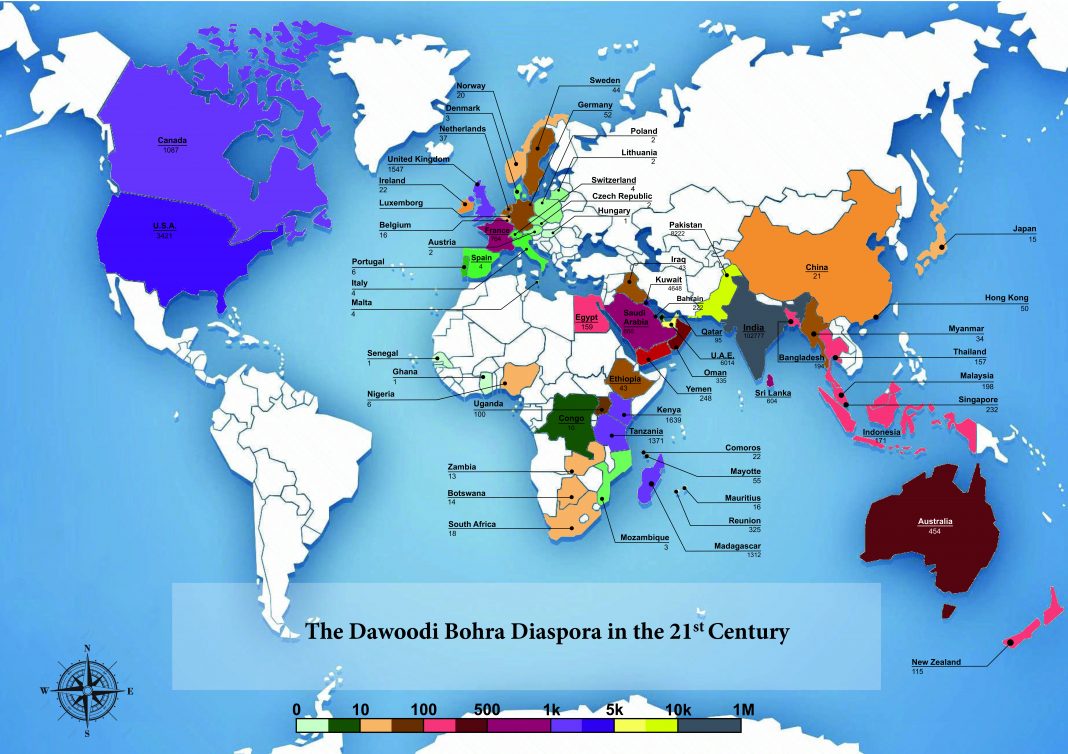 A distinctive global community, the Dawoodi Bohras reside in countries across the world. Their beliefs and values along with loyalty to their countries of residence have made them an integral part of their respective societies. Wherever they have migrated, Bohras have prospered both spiritually and materially.

Migration has continuously shaped human history; the quest for better prospects, more fertile lands and a peaceful existence has prompted human migration for millennia. The philosophy that underpins the migrations of the Dawoodi Bohras is inspired by Islamic tenets. The Holy Quran encourages hijra, or emigration, to enable Muslims to practice their faith in peace, following the example of the Hijra of Prophet Mohammed, a significant landmark in Islamic history. A Prophetic tradition, ‘Travel and you shall prosper,’ highlights the prosperity achieved through travel and migration. Similarly, Imam Ali enumerates five benefits of travel: easing sorrows, attaining a livelihood, and acquiring knowledge, etiquette and noble companions.

Taking these teachings to heart, many Dawoodi Bohras in the past few centuries have ventured to numerous countries for a variety of reasons—among them the pursuit of business opportunities, higher education and professional careers. For the Bohras, these factors, such as seeking education and livelihood, are articles of faith in themselves. Ultimately, they are a means to better preserve and steadfastly practice their faith and live according to their values in peace and prosperity.

Bohras are firm in their conviction that their time-honoured tradition of seeking blessings and guidance from their leaders, the daʿis, ensures the success of these endeavours. The benedictions of the daʿis instilled the courage, especially in the early migrants, to brave both the arduous journey and the hardships of settling in a new and unfamiliar land, often far from their families. Their foresight and counsel guided the migrants to achieve the best of both worlds—the spiritual and the material.

Members of the Dawoodi Bohra community commenced migration from the Indian subcontinent in the early 19th century. The 43rd Daʿi, Syedna ʿAbdeʿali Saifuddin, called 12,000 followers from the drought-stricken region of Kathiawar to Surat, where he provided them with shelter, sustenance and the opportunity to earn a livelihood through skilled work. Their accumulated earnings were given to them when the time came for them to leave. Apart from returning to their hometowns, Syedna also encouraged many to venture abroad to East Africa.

Throughout the 19th and early 20th centuries, with the guidance and encouragement of the daʿis, Bohras migrated to many regions across the globe, including East and Southeast Asia, the Indian Ocean, the Middle East, and the Horn of Africa. These pioneering Bohras often engaged in trading and entrepreneurship, in keeping with the community’s long-standing tradition of trade and enterprise. Many community members also settled and established new businesses in Pakistan and Yemen, where Bohras have long resided.

His Holiness Syedna Taher Saifuddin, who led the community from 1915 to 1965, expended many efforts in personally guiding community members who wished to venture abroad. He provided a clear vision to inspire them towards success while advising them to adhere to their values and identity. His successor, His Holiness Syedna Mohammed Burhanuddin, followed in his footsteps; their many travels to countries where Bohras resided reinvigorated the faith and culture of the community’s growing diaspora.

From the mid-20th century onwards, community members from both South Asia and East Africa began to travel to Europe, North America and Australia, largely in the pursuit of higher education and to practice professional careers such as medicine, IT and engineering. By the late 20th century, the community had established itself in regions all across the globe. Even today, Bohras continue to migrate and settle in new countries and cities, inspired by the same Islamic philosophy as those before them.

From the hardships faced by the early migrants to the challenges of the past few decades, Dawoodi Bohra migrants overcame adversity to achieve success and prosperity in their commercial and professional endeavours as well as safeguarded their heritage and faith. Their loyalty and respect for the law and their fellow citizens made them an integral part of the social and cultural fabric of their respective societies. Dawoodi Bohras firmly believe, as the Prophet Mohammed has taught, that love of one’s country is an integral part of faith.

Wherever they resided, while integrating and forging connections with local communities, Bohras maintained a distinct spiritual and cultural identity. Guided by the daʿis, community members tended to reside close to one another as they had lived in their hometowns, establishing community centres, often with a masjid, school and community dining hall. This helped ensure the preservation of their culture and faith through religious congregations, educational seminars and social gatherings, as well as supporting one another in establishing businesses and industries. The Dawoodi Bohras’ dedication to Islamic tenets, distinctive dress, language, business ethics and traditional cuisine, as well as their community kitchens which deliver nutritious meals to nearly every household, both distinguish and unify the community throughout the world. The spiritual guidance and counsel of the dais, whether in person or across oceans, provides each individual with a sense of direction and purpose.

Today, His Holiness Syedna Mufaddal Saifuddin, the leader of the Dawoodi Bohra community, travels extensively wherever community members reside. Like his revered father, Syedna Mohammed Burhanuddin, before him, each of his visits revitalises their faith and cultural values. He emphasises the Islamic values of peace and patriotism, encouraging every member of the community to be productive citizens who contribute to the progress and development of the countries they call home.

The information and statistics presented in this article are taken from the book, ‘Travel and you Shall Prosper: The History of Migrations of the Dawoodi Bohras,’ written by Yusuf Umrethwala.