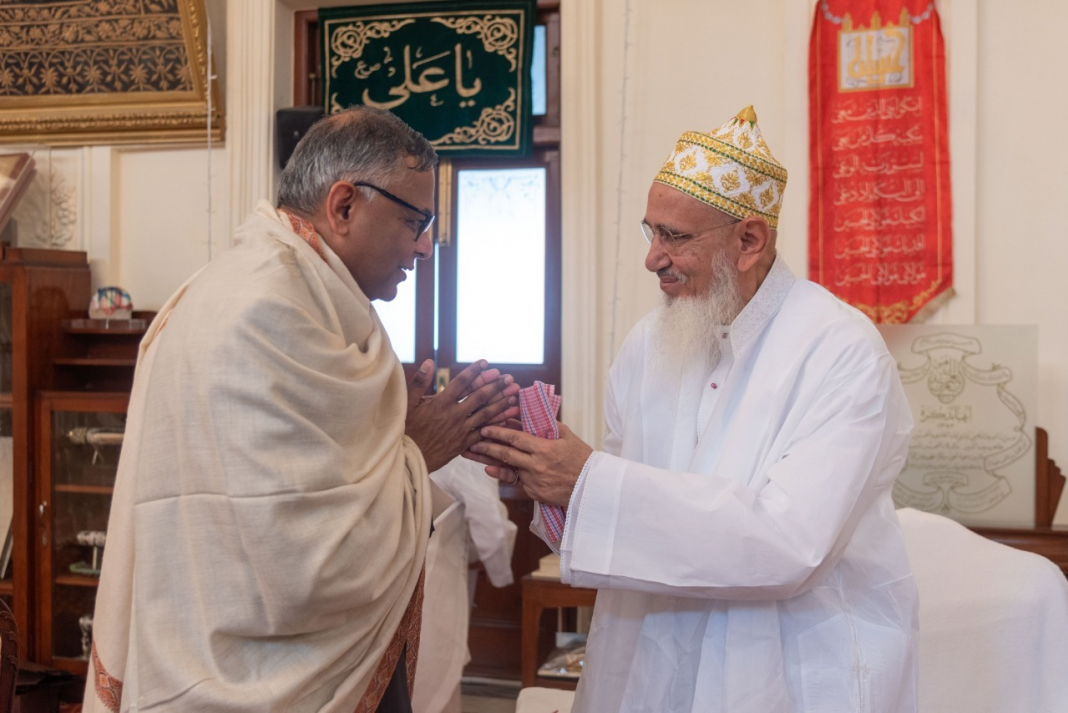 On November 15th, 2021, Mr Natarajan Chandrasekaran, the Chairman of Tata Sons, was presented an honorary doctorate by Aligarh Muslim University in a special convocation presided over by the Chancellor of AMU, His Holiness Syedna Mufaddal Saifuddin. His Holiness presided over the ceremony virtually from Surat, Gujarat.

Upon returning to Mumbai, His Holiness invited Mr Chandrasekaran to visit him at his residence, Saifee Mahal, in Mumbai. On the morning of 27th of November, Mr Chandrasekaran, accompanied by Mr Suprakash Mukhopadhyay, Tata Sons & Group Corporate Secretary, called on His Holiness. When he arrived, Mr Chandrasekaran was escorted to the 2nd floor hall and received by a group of businessmen from the Dawoodi Bohra community.

Syedna Mufaddal Saifuddin congratulated Mr Chandrasekaran for the honorary doctorate he received from AMU, for which Mr Chandrasekaran expressed his gratitude, His Holiness being the University’s Chancellor. During the course of their conversation, Syedna remarked that the ‘Tata’ name was one which he has been well acquainted with ever since his childhood. Syedna inquired into Mr Chandrasekaran’s hometown in South India and the well-being of his family. A number of Tata’s economic and philanthropic ventures were also discussed.

Mr Chandrasekaran presented His Holiness with gifts and thanked him for taking the time to meet with him. He recalled that during the period in which his office had temporarily been shifted to Fort House, which is adjacent to Badri Mahal, Syedna’s administrative headquarters, he had on multiple occasions seen His Holiness from his office window and the large number of Dawoodi Bohras who would gather to greet him.

His Holiness presented Mr Chandrasekaran with tokens of appreciation and draped a shawl upon him as a traditional gesture of respect and goodwill. He prayed for Mr Chandrasekaran’s health and success and wished him the best for all his future endeavours.