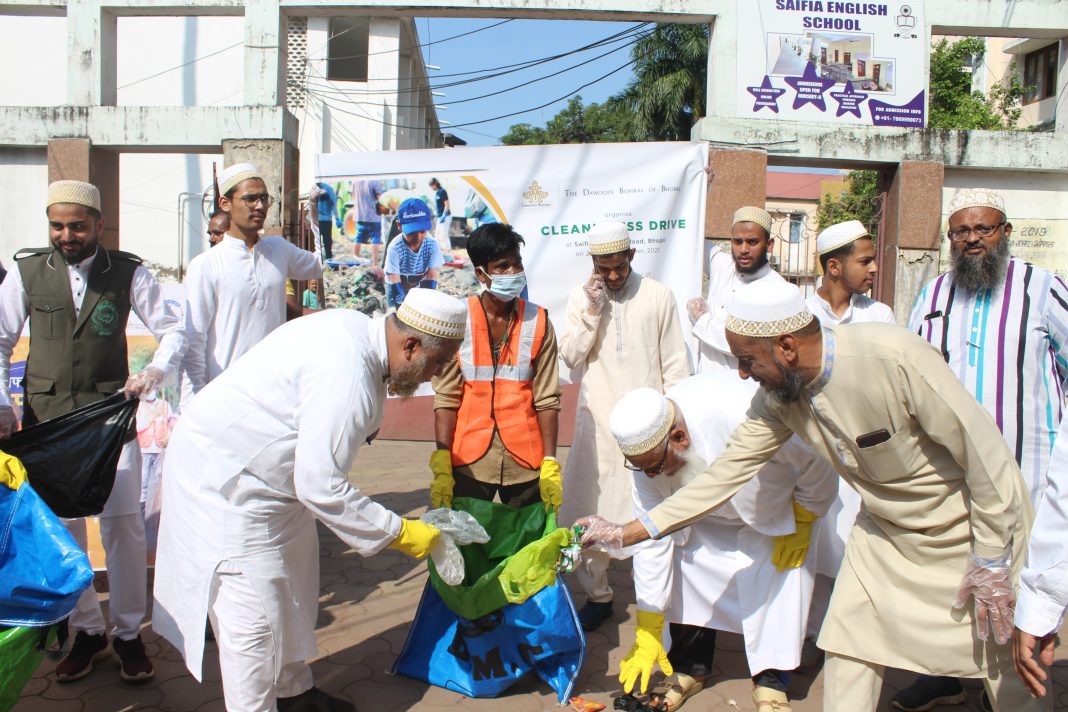 Swachh Bharat (Clean India) was one of Mahatma Gandhi’s most cherished visions for the country. On the occasion of his 152nd birth anniversary, we are reminded of his teachings, especially regarding the importance of cleanliness.

Inspired and guided by the prophetic tradition which establishes cleanliness as an integral part of faith, Dawoodi Bohras across the world continue their long standing commitment to promote and foster a clean and green environment for all.

Furthering that commitment and marking the occasion of Gandhi Jayanti 2021, community members in different parts of the country organised cleanup drives and awareness campaigns.

The drives were conducted under Project Rise, the community’s global philanthropic arm dedicated to make a positive and impactful contribution to society in concert with the UN’s Sustainable Goals agenda.

Below is a summary of the various activities that took place across the country:

Around 15 students from Burhani College, along with staff, faculty and BMC officials went shop to shop at the Crawford Market area in Mumbai, encouraging big and small shop owners to switch from single use plastic bags to more sustainable and eco friendly options..

The students distributed around 350 cloth bags to shop owners and customers while reminding them about the effects of single use plastic waste on the planet and the need to switch to sustainable alternatives. Some of these cloth bags were upcycled from used t-shirts and pieces of cloth.

The campaign began on the International Plastic Bag Free Day (July 13) when a workshop was initiated for students to learn how to make cloth bags by reusing t-shirts and pieces of cloth.

The Dawoodi Bohra community of Indore, in collaboration with the Indore Municipal Corporation, Burhani Foundation and Project Rise, launched a ‘Zero Waste’ campaign.

Announced under the Government of India’s ‘Swachh Bharat Mission,’ the aim of this campaign is to spread awareness about eliminating waste and adopting a sustainable lifestyle. Over 150 people from over 24 cities and towns in Madhya Pradesh participated in the launch event.

The program was graced by the Honourable Member of Parliament Shri Shankar Lalwani, Member of the Legislative Assembly Smt Malini Gaur, Indore Municipal Commissioner Smt Pratibha Pal and Divisional Commissioner Dr Pawan Kumar Sharma along with other senior government officials. The heads of the 12 Dawoodi Bohra centres in Indore were also present on the occasion.

The Dawoodi Bohra Community of Secunderabad organised a cleanliness drive as well as a meet and greet with the officials of Secunderabad Cantonment Board at MSB Educational Institute.

Members of the community installed 5 pairs of wet & dry dustbins as per government regulations, in high open waste pollution spots around the RTC Colony neighbourhood of Trimulgherry.

Amongst the sites was an open sewage that caused discomfort to residents, businesses and passersby. Volunteers cleaned the site and installed dustbins to aid in the proper disposal of litter. Several other areas, including the surroundings of a school, were cleaned and dustbins were installed, to ensure a clean and green neighbourhood.

Bohra women in Amravati conducted a walkathon to spread the message of a ‘Fit & Clean’ India. The walkathon was organised in association with Kavya Womens Group.

Community members in the country’s capital participated in a cleanliness drive in collaboration with World Class Noida to clean improperly discarded plastic waste from one of the city’s neighbourhoods. Additionally, sanitisers were distributed among local vendors as part of the activity.

Community members in Chennai undertook a cleanliness drive in the areas adjoining their Masjid. Nearly 100 kgs of waste was picked up with the help of community volunteers as well as workers from the Corporation of Chennai.

Community members in Karjat marked the day in a unique way by felicitating the cleanliness workers of the Karjat Nagar Palika (Karjat Municipal Council). A total of 120 workers comprising men and women were felicitated on the occasion.

Dawoodi Bohras of Bhopal were joined by Mr Kashif of the Nagar Nigam Health office in a cleanliness drive. The President of the Bohra community in Bhopal distributed commendation certificates to the municipal workers as a thankful gesture for the services they render on a regular basis.

In Dahod, community members tied up with Dahod Nagar Palika to conduct a cleanliness drive that saw approximately 2.5 tons of waste collected. The drive was carried out from Bhagini Samaj to Zydus Hospital on Zydus Hospital road.

Dawoodi Bohras in Mumbai installed dust bins in the presence of MLA Rahul Narvekar near the Fort Area in South Mumbai.

Dawoodi Bohras in Nashik conducted an awareness event in the presence of the commissioner and several high ranking officials of the Nashik Municipal Corporation.