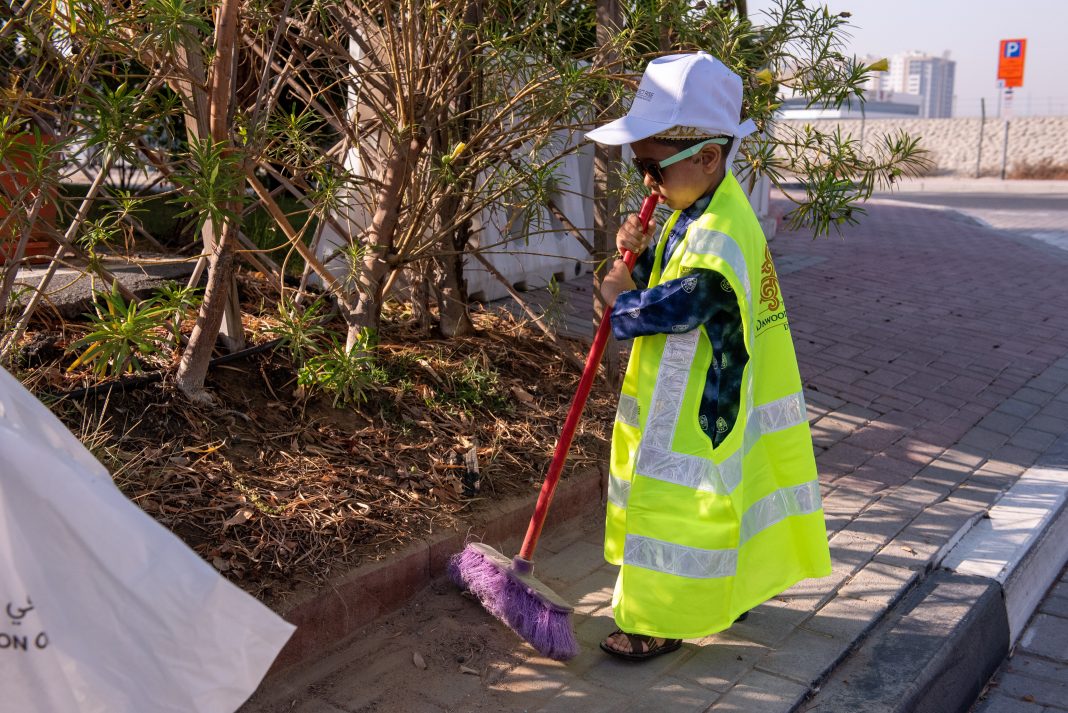 Climate change is a challenge that requires urgent universal action in order to foster a sustainable future for the coming generations. One of the biggest contributors to environmental degradation is the unchecked proliferation of non-biodegradable materials such as plastic that choke the environment and have devastating effects on a wide range of living species across the ecosystem.

Inspired by the Prophetic tradition which states: ‘Cleanliness is an integral part of faith,’ and guided by the teachings of His Holiness Syedna Mufaddal Saifuddin, who repeatedly emphasises the need for environmental responsibility, Dawoodi Bohras across the world continue their efforts towards a clean living environment for all.

Here is a brief of the community’s efforts in different cities around the world.

In Ahmedabad, around 100 volunteers, young and old, participated in a cleanup drive near Gita Mandir Bus Station. The younger volunteers displayed their enthusiasm and commitment to cleanliness by holding up placards to spread the message of a cleaner and healthier environment. The event was attended by Shri Kiriti Parmar and Dharmendra Shah, the honourable Mayor and Deputy Mayor respectively.

Nearly 60 volunteers stepped forward for a neighbourhood cleanup drive that was conducted in collaboration with the Municipality of Dahod.

The team collected about 50 kgs of plastic that will be converted into bricks by the Jago Bharat team. Sanitisers were distributed to roadside vendors and rickshaw pullers followed by an informative session on hygiene.

Community members in Marol continued their sustained effort to raise awareness about the harmful effects of single use plastics on World Cleanup Day.

As part of the ‘Turning the Tide Against Plastic Pollution’ campaign, volunteers hosted a seminar to encourage people to refuse and reduce single use plastics. Residents of Sai Baba Nagar and Saifee Park were educated on the ill-effects of plastic pollution and how they could adopt the three eco-friendly Rs as a way of life, namely, reduce, reuse and recycle.

The event was attended by the local corporator Shri Pramod Sawant and his wife Smt Priyanka Sawant. At the end of the seminar, participants took a pledge to adapt to a more sustainable lifestyle.

The event mobilised nearly 150 volunteers who went door to door across six pre designated zones throughout the city. It was planned in collaboration with Burhani Foundation, a community organisation that endeavours to address environmental problems in India and around the world.

The collected paper waste will be sent to a recycling facility at Vapi for processing.

The walk was planned in collaboration with The Sindh Solid Waste Management Board (SSWMB) which saw the participation of SSWMB regional coordinator Ali Asghar Khadim, District South deputy director Ghulam Abbas and some officials of a Chinese company.

This was the 2nd year of conducting such activities on World Cleanup Day in order to raise awareness about the community’s ‘Saaf Karachi campaign’. The organisers plan to continue these activities throughout the weekend in different neighborhoods in Karachi.

The San Diego community partnered with Surfrider Foundation on International Coastal Cleanup Day by participating in cleanup activities on the streets around the Pacific Beach.

Ajman community members picked up plastic and paper waste as part of a cleanup drive to collect paper waste for recycling purposes.

More than 400 members of the Dubai community came together to clean five locations around the community centres in Al Qusais and residential areas in Warqa and Nahda in what was the community’s fourteenth consecutive year of organising cleanup and awareness drives in alignment with the Dubai Municipality’s ‘Cleanup the World’ campaign. Nearly 100 Kgs of waste material were collected in 200 bags. Watch the video of the initiative here.

Nearly 150 volunteers from the Dawoodi Bohra community in Sharjah joined hands with the local municipal body, Bee’ah, in a cleanup drive where 5 tonnes of waste material were collected from a single city locality.

Dawoodi Bohras in Bahrain launched a sustained ‘Clean Our Neighbourhood’ campaign as part of World Cleanup day to pick litter and beautify streets, gardens and beaches.

A beach-cleanup activity was conducted on Al-Jarrim island off the coast of Bahrain in collaboration with Bahrain Diving Volunteer Team Authority. The team spent the day sorting over 1 ton of plastic waste to dispose of it in an eco-friendly manner.

60 volunteers from the Qatar community turned up at Freiha Archaeological Site with the mission to Keep Qatar Clean. Nearly a ton of waste was collected in the effort.

Over 460 volunteers from the Dawoodi Bohras of Kuwait set off in 5 different locations, namely, Kuwait Towers, Khaitan Garden, Hawally, Abu Halifa and Salmiya Garden to pick over 4 tons of waste as part of their campaign to promote a cleaner environment. Click on this link to know more about the initiative.

The Dawoodi Bohras of Muscat joined hands with Bee’ah, a local organisation committed to achieving the long term environmental cleanliness goal of the sultanate of Oman, to clean up the Aint Beach in Darsait, Muscat, on the occasion of World Cleanup Day. The event was attended by Mr Thuwaiba Alraeesi, Social outreach and Community officer, Oman Bee’ah.

The volunteers cleaned around 500 kilos of waste while pledging to reduce waste and collectively striving towards a clean Oman.