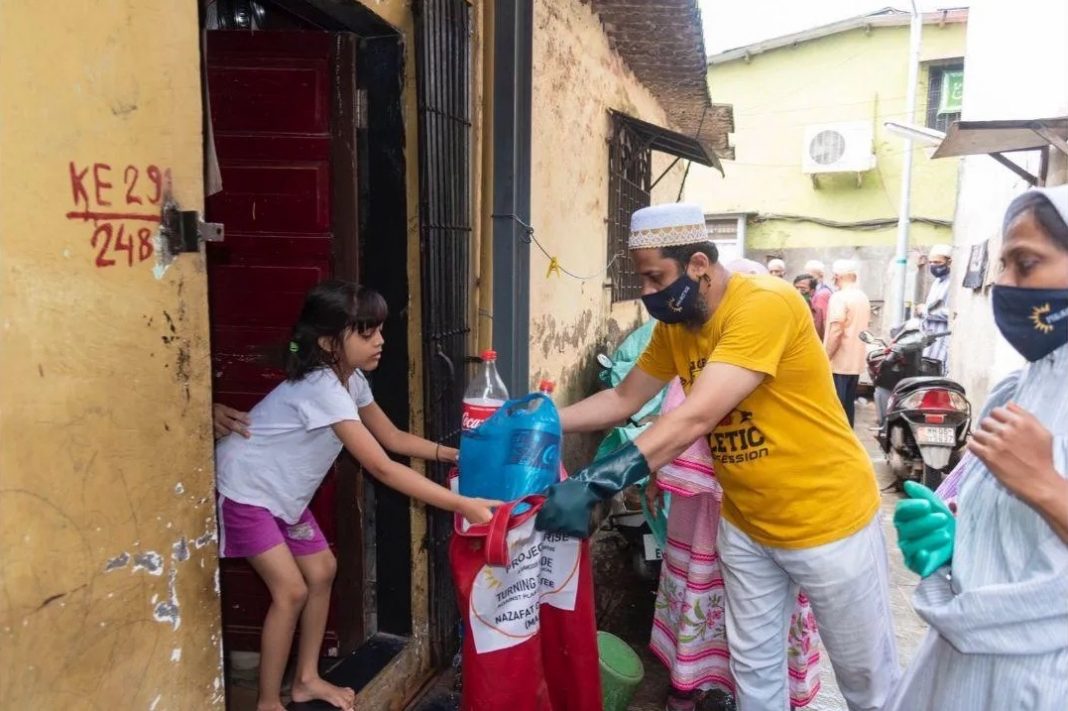 For 53 weeks amid the Covid-19 pandemic, Mumbai’s Dawoodi Bohra community, which takes pride in its social initiatives, has been educating people in Marol about protecting the environment. The efforts have borne fruit now, as locals decided to put what they learnt to use this Ganesh Chaturthi.

Dr Murtaza Kothawala, who has been an integral part of the project with the community and who is a Marol resident himself, says it was a beautiful outcome for the campaign. He explains, ‘We went to a new area called Sai Baba Nagar in Marol to raise awareness about keeping the area clean with a zero-waste approach. Luckily, we met some committee members of the Sai Baba Nagar temple, who called the society members and we had three meetings with them about protecting the environment.’

After the presentations, the members proactively approached the team two weeks ago saying they would like to switch to an eco-friendly Ganesh Chaturthi. ‘We were so glad and thought that our work here is done,’ Kothawala admits gleefully.

The locals had earlier taken baby steps in the direction but had never done it at such a large scale. Now that they have, they want to continue it. Ravindra Ravnang, a technician and resident, says while his locality did try to do their part, after presentations from Kothawala and team, they were fully convinced.

‘We decided to stop using any kind of decorations involving plastic and instead use eco-friendly decorations like flowers and dried leaves, which are easily available. We plan on continuing this in the years to come because it has been a very nice initiative,’ says 56-year-old Ravnang, who lives near the Marol Pipeline and has been actively participating in the year old initiative. It does not stop there. They are going beyond and regularly talking to people in their area to convince them to throw their plastic waste in a dedicated dustbin near the temple. The waste is then picked by the team to take to the scrap collector or for recycling, which helps create a circular economy and gives everybody a chance to earn, according to Kothawala.

The Dawoodi Bohra community calls this effort in Marol by the Burhani Foundation, the ‘Project Rise’ initiative. This is to indicate the upliftment of society through social work. In the past, the community took steps to help city based environmentalist Afroz Shah conduct the Versova Beach cleanup and from there initiated various other beach cleanups in the city on their own. It was their success in creating awareness among the people living in Filterpada along the Mithi River that made them take their social work to the next level.

Kothawala and a 15 member team have been visiting the localities every Sunday to create awareness. He explains, ‘The idea to keep our surroundings clean originates from our houses and locality. That is why we decided to start with the slum and market areas near us.’

The team includes different experts including teachers, doctors and medical experts from the community, who collect at least 15 to 20 kilos of single use plastic waste. ‘We conduct awareness programmes in every area we visit for the first three weeks and we go through the same lanes and doors during this time and request them to listen to us. While some are skeptical, others are sleepy during that time because we go at 10 am, they eventually get convinced by seeing our keen interest in the subject and start taking the initiative to keep their area clean,’ adds Kothawala.

One of the many others has been Eldon Pereira, a member of the Olleria neighbourhood in Marol village, whom the Project Rise team interacted with last October. He explains, ‘The volunteers explained to us how to segregate the trash into dry waste and wet waste. They were very helpful because before that I wasn’t educated about the subject and we used to simply put everything in a bag and get rid of it.’

Two Sundays after learning about how he can contribute to keeping the environment clean, the Marol local went out and bought another bin for dry waste and began segregating the garbage from his house, which extended to the other houses in the neighbourhood. ‘The wet waste used to go into the municipal garbage bin and the dry waste was kept aside for the team to pick it up,’ he adds. The team connected them with scrap collectors to continue the effort.

Pereira, who is a caterer, was so inspired that he took it a step further recently and approached his regular vegetable vendor in the nearby market and connected him with the Project Rise team. The 61 year old says, ‘I had seen his vegetables come in plastic bags and when I asked him how he disposes of it, he simply said he throws it away. I told him to not do it as it is bad for the environment and the team would come and pick it up from him for recycling.’ It has been a while now and since the team members had to move to another area, Pereira hopes the collaboration between the market vendors and the team is still on for the sake of the environment.

These are volunteers who have gone beyond their regular job to become eco warriors and started by first creating awareness among children in Marol. The children, who Kothawala says have received the initiative well, are now a part of the ‘Crusaders’ team which tells parents and adults about the importance of keeping their surroundings clean. This is only the start but has sown the seeds for a better and cleaner future.