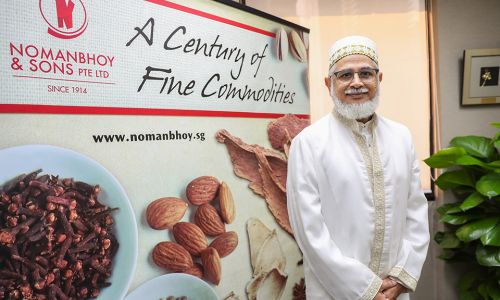 Written by: Teh Shi Ning

‘A Century of commodities’ the tagline of one of Singapore’s oldest traders of spices, nuts and dried fruit, Nomanbhoy & Sons, reads.

To hear fourth-generation scion Hanif Nomanbhoy tell it, that century of growing an international business was built on ‘a century of relationships:’ abiding, multi-generational ones that have withstood world wars, business cycles, and other trials – not least, the ongoing global pandemic.

Thirty-seven years since joining the family business, Mr Nomanbhoy still marvels at the mutual trust and willingness to go the extra mile that such partnerships produce. How one client, for instance, upon finding himself in lockdown as Italy battled oxygen shortages amid a spike in Covid-19 cases, immediately called to reassure them that all business would be taken care of despite bank closures. Such relationships are pure gold, says the man to whom a handshake matters more than a contract.

It was in 1892 that Mr Nomanbhoy’s great-grandfather first came to Singapore from India to manage a branch of a trading company. When that closed down suddenly in 1914, he decided to become an entrepreneur. His firm at Malacca Street started trading in pepper from Sarawak, assorted spices from Indonesia and cloves from Madagascar and Zanzibar. The focus at that time was still on sourcing for India.

When his grandfather took over the reins and had to rebuild much of the business post-war, the company evolved into more of an import-export trader. But it was Mr Nomanbhoy’s father who truly internationalised the business from the 1950s onwards.

The company became a household name in the supply of cloves and started selling other spices, nuts, dried fruit and more to the US, Europe, the Middle East and then to China, Korea and Japan too.

Today, the company has 180 employees globally and a presence in over 50 countries. Its buyers include multinational brands whose spice jars line supermarket racks and perfume makers that extract essential oils from Nomanbhoy’s spices.

But, it is with the farmers who grow and process these spices, nuts and fruit that Nomanbhoy & Sons is now working more closely than ever before.

‘When I joined in 1984, my main thrust was how to move closer to the origins,’ says Mr Nomanbhoy. It was a deliberate decision. Instead of fighting with their own customers for shelf space in supermarkets, they would move up the supply chain to magnify existing strengths in sourcing.

By approaching traditional suppliers and investing in them, Nomanbhoy has gained more control over the farming, harvesting and processing of agricultural commodities, thus securing a more sustainable supply chain for itself.

Here too, multi-generational relationships are honoured, thus joint ventures are the Nomanbhoys’ vehicle of choice. ‘There’s no need for us to go acquire them, unless they want to sell. And even if they want to sell, I’d first say, ‘What about working together?’ Many of them are fifth, sixth-generation business owners too.’

Nomanbhoy itself has a fifth-generation leader on board now – Mr Nomanbhoy’s elder son Aqeel is a director heavily involved in several projects in Indonesia.

As end users grow increasingly conscious of food supply chains and food safety and are more willing to pay for certified organic produce, companies like Nomanbhoy are having to respond swiftly.

With a university and the Indonesian Embassy, it is now working to start integrated coconut production in Sulawesi, with the aim of securing organic certification.

This means bringing farmers together to help them understand the value of organic products and share sustainable methods of farming. The company is also building a factory to produce a full range of coconut products – coconut water, coconut milk, desiccated coconut, coconut chips and flavourings.

There is no lip service about the way they incorporate sustainability into such plans, Mr Nomanbhoy says. It is currently investing more than half a million USD to ensure waste water from production is treated and will not contaminate the environment.

Fair trade and labour laws have come under the spotlight too in the world of commodities trading. But it has not impacted the way they operate much. ‘That has been an intrinsic part of our DNA. We’ve always ensured that we give everyone a fair price. You cannot create relationships if you do not have fair trade practices,’ says Mr Nomanbhoy.

Should the company come to know of child labour on the farms they source from, for instance, it steps in to say: ‘That’s not acceptable, we’re sending you to school.’ To date, Nomanbhoy has helped to grow eight communities in Africa – building schools, setting up medical facilities and sponsoring football teams. ‘They become part of the Nomanbhoy family.’

He tells the story of how Aqeel, when he first joined the business, brimmed with ideas to cut costs and raise profitability, such as setting up representative offices in key locations. Mr Nomanbhoy sent him to visit suppliers in Madagascar, Zanzibar, Sulawesi with whom the company has had decades of close ties. When he returned a month and a half later, the son had changed his mind: ‘Dad, no point establishing new offices. They are Nomanbhoy.’

Building a community where they source also makes it easier for the company to meet a rising challenge in the commodities trade: that of ensuring transparency and traceability.

‘Profitability is still the bottom line. But as much as we can give back, we try to. And when we are part of the farming community that is supplying us, we can then easily control the soil, water and how they are growing the trees and crops,’ he says.

European buyers, in particular, now demand stringent safety standards of agricultural produce, from the soil and water used in farming, to pesticide use.

The problem is one that begins outside the farmers’ remit, in Mr Nomanbhoy’s view, though they must now act. ‘Unfortunately, we human beings have adulterated the natural environment. We have adulterated the water, the atmosphere and all these effects are now showing up in the crops. So, we have to take corrective action,’ he says.

It is why he is empathetic, while taking up the challenge of helping farmers understand how sustainable, organic farming practices ultimately benefit them too. ‘I really enjoy doing this, just sitting and talking to the farmers. Explaining why they have to change the water, why they cannot use these chemicals… We need to bring them into our community.’

That part of his work has been severely disrupted by the pandemic’s impact on air travel.

But, save for a deliberate slowing of pace in early 2020 amid the uncertainty of Singapore’s circuit breaker and lockdowns elsewhere, business has otherwise been resilient, even ‘booming quite well.’

The pandemic has shed light on potential risks though.

Mr Nomanbhoy sees his business as an essential part of the food supply chain, a bricks and mortar business whose importance to Singapore was highlighted in the panic of the pandemic. ‘Singapore continues to be a trading hub of physical goods. We need to make sure that the flow of goods continues to come through Singapore.’

In his father’s and grandfather’s time, Singapore had always been a market for shortages. If other markets were facing a shortage, they would source from Singapore first because of the huge flows of trade passing through. ‘This happened again in the pandemic,’ Mr Nomanbhoy says.

With shifting trade routes though, Nomanbhoy had, pre-pandemic, held marginal stock in expensive Singapore, while keeping the bulk of its stock closer to the source. This has changed in the past year – the company now holds double the stock it used to keep here, for greater safety and security and as insurance against potential lockdowns in source markets.

Lockdown measures also showed the limits of digitalisation in the sector they operate in. The original bills of lading that needed to be sent to buyers were not always accepted in electronic form. Mr Nomanbhoy now expects digitalisation to accelerate further – particularly as younger generations of farmers and suppliers take over their parents’ businesses.

Like his father before him, Mr Nomanbhoy grew up steeped in the ways of spice trading. ‘After school, I would sit with the labourers in the warehouse. I learnt how to play mahjong and how to weigh the cargo.’

On his part, he has taken his children along on trips to Africa and Indonesia to see and appreciate the conditions Nomanbhoy’s suppliers work and live in. ‘You may have a PhD, you may be the best educated person in the world, but are you able to sit with this farmer around the fireplace and his four wives?’

The next generation has to understand where produce comes from, not buy and sell what they do not really know, he believes.

Apart from Aqeel, Mr Nomanbhoy has another son who is now working towards a degree in agricultural science and agricultural business. They have full freedom of choice when it comes to the matter of joining the family business – there is no compulsion. But there is no automatic entitlement either.

‘When it comes to succession planning, these are the things we value. One, you have to be extremely competent. Two, you have to be aligned to the values that have created this business,’ he says.

Indeed, with three generations in their own office now – his father, himself and his son – disagreements are inevitable, Mr Nomanbhoy says laughingly. But shared core values, which stem from their family’s background of faith, serve as a uniting force.

The family was among the earliest Dawoodi Bohras, a deeply religious sub-sect of Islam with roots in India, to settle in Singapore. Traditionally, the Bohras are a trading and business community known for honesty, fairness and trustworthiness; values that have been cherished in Nomanbhoy & Sons too.

Religion has much to do with their business’ sustainability, Mr Nomanbhoy believes. ‘Risk appetite has been mitigated because of our religion. There are certain things we don’t do. It has made sure that we don’t excessively overtrade at any point in time.’

‘It has crimped our growth, perhaps. We have not grown as exponentially as we could have, but it’s okay. Finally, I can only eat three meals a day,’ he quips.

A general rule of thumb, that family members uninterested in actively running the business will be bought out, has also guarded the business against the potential drama of spreading family trees.

It has meant significant capital outflow from the business with each generation though. ‘We can’t become too huge but it’s good because we avoid the infighting that can happen in family businesses over the generations,’ Mr Nomanbhoy says.

Will the family business continue to remain a privately-held one? It has had several offers over the years, including for reverse takeovers. But, Mr Nomanbhoy says, ‘Not in my lifetime. I don’t need to. I like to be my boss, I love doing what I’m doing: meeting people, building good relationships, working with everyone from the government official to the farmer.’