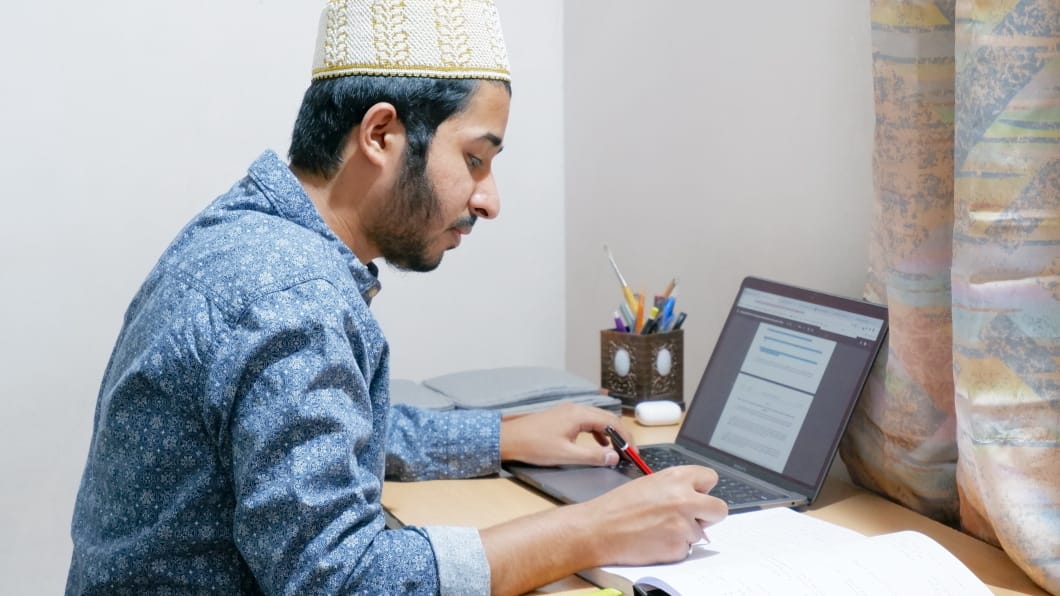 Hatim Husain from Nagpur, India, is an educator, scholarly writer, lawyer and the recipient of two prestigious scholarships namely, the Rhodes and the Schwarzman for the year 2020. He has previously done dual degrees in Commerce and Law from Gujarat National Law University and a Master’s in Global affairs from Schwarzman college at Tsinghua University, Beijing. He has authored multiple works with Cambridge University and is currently assisting UNDP in an advisory capacity on vaccine equity while pursuing his DPhil at Oxford University. In this piece, he shares his life’s story, how higher education gave him greater opportunities and his thoughts on reducing income inequality through inclusive fin-tech regulations.

You pursued a graduate program at GNLU for five years. What motivated you to pursue law?

I would say the seed was sown in my early childhood. When I was young, I saw my father’s business shut down due to financial constraints and my mother, who was a teacher, used to grind it out for 16 to 17 hours on a daily basis to provide for the family. That gave me an understanding about the value of hardwork and hardship. I matured at a young age in that sense. Growing up, I was unimpressed by social systems that created hardships and barriers for everyone, hence restricting them from raising themselves up from a particular level. I thought the social model in which the rich kept getting richer and the poor poorer was quite flawed. Thus, I sought law as a means to address and alleviate these income irregularities.

You struck an effective balance between work and studies. Tell us how you managed to focus despite such a demanding schedule?

I did that for a long time. When I went to college to study law, I used to work as a ghostwriter for companies to set up their websites. It wasn’t warranted, but I felt that it was important for me to gain some form of financial maturity and independence. The income was useful in meeting my internship expenses. There was a time, when I had rented out a space to stay at the Bhendi Bazar locality in South Mumbai, which, as you know, is expensive. I used to have my road map laid out at least five months in advance. It gave me clarity and the confidence to do everything from studying, to writing, to doing other chores within the time frames. Since I did everything in a time-boxed manner, I had control over my schedule and didn’t feel astray.

You became a Rhodes and then a Schwarzman scholar within the span of a few hours! What was your initial reaction and how did you pursue both?

It felt surreal. I still recall that my name was announced (I think second on the list) of five people for the Rhodes and then the Schwarzman call came. The first thing that I did was look heavenwards and thank the Almighty for blessing me with this opportunity. To realise a dream come true and that too in such quick fashion was beyond expectation. The challenge I now faced was that I had to choose between the two. However, both were aligned to the choices of study I wanted to do. I wanted to study the intersection of law, finance and technology and my objective was to focus on financial inequality and see if such regulatory models could be framed that could decrease the poverty gap. Although I wanted to study this from a legal perspective by doing a DPhil at Oxford, Schwarzmann provided an opportunity in equal measure from a more practical perspective. In 2020, China lifted almost 800 million people out of poverty, so that was one of the motivations for me to apply there. Schwarzman candidates get what I call ‘the front seat understanding of such things.’ I remember Steven Schwarzman called me on the day of the announcement to extend his congratulations and asked me to consider pursuing the Schwarzman as these scholarships were awarded on a non-deferral basis. I was in a dilemma as I had two great opportunities before me and I had to let go of one of them. I put a request in the Rhodes program if they could defer my scholarship by a year, thereby giving me a chance to go to China and pursue the Schwarzman program. To my surprise, they complied with my request. It was at the time only the third instance in its history of 120 years that Rhodes deferred a scholarship (The first couple of times being for health reasons). They thought my idea of studying ‘models of poverty alleviation’ first at the ground level at Tsinghua would be complementary to the doctoral study at Oxford.

How was the experience at Beijing’s Tsinghua University?

It was an eye-opening experience. Although my Mandarin was not that great, I managed to get along and did not find language to be as big a barrier. I made use of the opportunity by doing a collaborative study with two other students. The tech-giant Alibaba gave us access to one of a kind data that helped us in understanding the Chinese model of economic flourishment and rural revitalisation, which has been a significant contributor to the Chinese success story of poverty alleviation and reducing the inequality gap. That study is now in its final stages and is soon to be published.

What are your thoughts on cross-cultural studies? Stephen Fry once said that real education takes place outside classrooms in interactions with friends and such people. Do you agree?

Yes, in fact, in that sense, I have been on a learning journey since my childhood. I was born and brought up in Nagpur and did most of my studies in Ahmedabad, so eventually I learnt Gujarati by staying there. I used to intern quite a bit at Bangalore so I started picking up the language there. When I went to China, I got exposed to a completely new culture which opened up myriad avenues of knowledge. It zoomed me out from the constricted view that I had held of the world and showed me how people – who were as human as those with whom I had interacted with all my life – are leading a completely different lifestyle with unique customs, habits and traditions. Initially, like I said, I didn’t know Mandarin at all. I was staying at this hotel, where there were times when I used to point to the pictures in the hotel just to make them understand what food I wanted to order. Those were the initial struggles, but as I eventually caught up with the language and interacted with people such as my Chinese friends, thesis instructors and advisers, etc; I came to realise that they had so much to offer, something which you can’t really study even if you read a book written in your mother tongue. This made me realise the beauty of human interaction in different parts of the world. I realised that exploring different cultures gives you wings and broadens your horizons and it is indeed one of the most remarkable ways to educate oneself.

You have said in one of your previous interviews that you would like to work on regulatory models to help reduce the income inequality gap. Can you explain how you plan to go about doing this?

My goal at Oxford is to explore the existence of such regulatory models that have the capacity to bridge the gap in inequalities between minor communities and large societies. How I intend to do that is by focusing on emerging technologies and seeing how they, in concert with legislative intervention, could potentially reduce the income inequality gap. One of the things I worked on when I was in China was studying those regulatory models which enabled communities in rural areas to empower themselves and how we did that was by studying the Chinese financial regulation market. We found that previously most of the MSME sector was barred by the fact that they could not register themselves on the e-commerce platform. The Chinese miracle has happened by taking advantage of emerging technologies and bringing rural communities to the mainstream. I think this is somewhat relevant in the Indian context as well. We have so many indigenous communities that create handicraft products and it is unfortunate that a lot of those products do not see the mainstream market. That’s mostly because e-commerce regulations do not really empower them to create a surrounding or facilitating environment that enables them to register themselves on the platform and ensures that the competition and regulation laws do not interfere with their profits – so the big companies do not eat all of the profits that they get. Similarly, the delivery system, the logistics sector and the transportation regulations need to make sure that the last man delivery happens efficiently so that small scale service providers get their fair share of the profit and do not become prey of the profiteering middle men. I think these issues can be efficiently addressed in the Indian context by a robust structuring of regulations.[so, basically you want to bring technology to the grassroots… ] Yes. Exactly. I would like to pave the way for new entrepreneurs to make sure that emerging technologies reach the grassroots level and that it is regulatory, i.e, legislated regulations facilitate that.

As a role model for tomorrow’s generation, what would you like them to know?

I don’t feel that I am equipped to be a role model for anyone at this point. I feel based on my experiences that there are opportunities that are always within your grasp. The only thing that matters is how hard you work. If students understand the value of hard work, they will eventually reap the fruits of their labour.