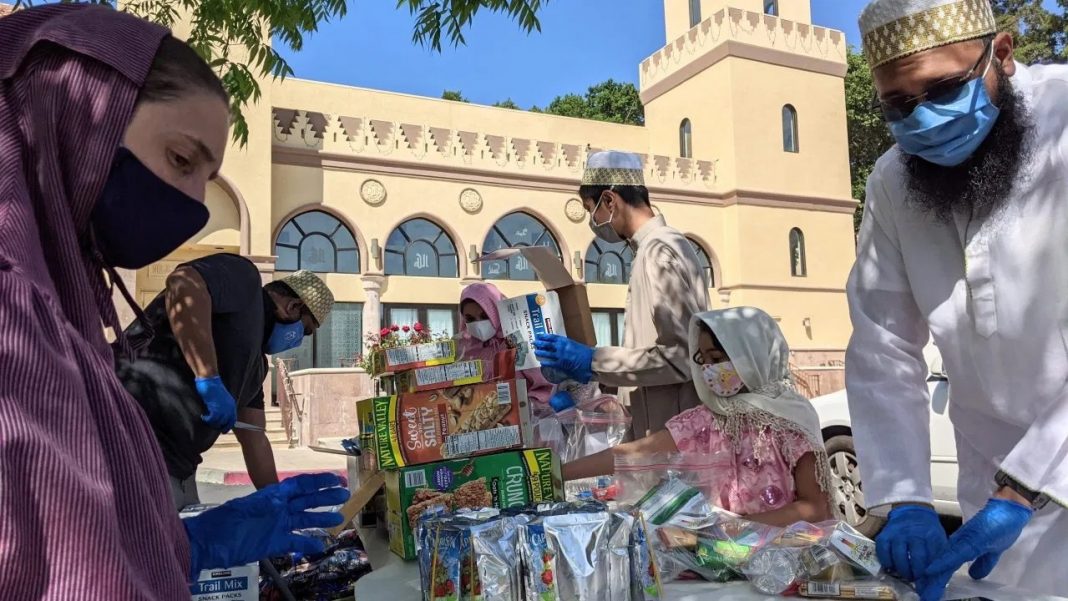 The Jewish News of Northern Carolina

For Jews, it’s tzedakah. For Muslims, it’s sadaqah. The meaning is essentially the same: an act grounded in a religious obligation to give to others.

Last week, Muslims from the Dawoodi Bohra community and Jews from Temple Beth Torah, both in Fremont, explored their shared spiritual commitment in a joint project to fund and assemble nearly 500 snack and hygiene packs for distribution to unhoused people throughout the region.

Though the effort had been in the works for a couple of months, representatives from the two congregations happened to meet to deliver the care packages on May 12, just as Muslims and Jews were firing rockets and attacking one another on the streets of Israel and Gaza.

‘When we went to do the dropoff, we all looked at each other and sort of had this moment of understanding,’ said Mufaddal Ezzy, a volunteer with the Dawoodi Bohra community, a Muslim sect that worships at Masjid-e-Mohammedi in Fremont. ‘We’re here in this particular region working together towards a shared goal and really just hoping and praying for peace.’

Ezzy explained that sadaqah is one of the pillars of Islam. ‘It’s a manifestation of our faith and our values.’

Jill Ziman, administrator of Temple Beth Torah, a Reform synagogue, said she was moved by the act of shared purpose coming at this time of strife in the Middle East.

‘It’s heartwarming to know we can get along so easily,’ said Ziman, who first met Ezzy about 15 years ago when she invited representatives of the Dawoodi Bohra community to the invocation of Rabbi Avi Schulman. ‘We do share the same values of tikkun olam (repair of the world). The requirement to lift up and support the unhoused in our community is the same for both religions.’

Members of the Dawoodi Bohra community, a branch of the Shiite sect of Islam, began immigrating to the Bay Area from India, Pakistan, East Africa and Sri Lanka in the 1950s. In 1985, the community purchased land in Fremont and in 2005 the Masjid-e-Mohammedi was inaugurated as the first Dawoodi Bohra mosque in the Western United States.

For years, congregants of Masjid-e-Mohammedi and Temple Beth Torah have worked independently to support Abode Services, a Fremont-based organisation that serves the unhoused in seven Bay Area counties and helps them find stable housing. But this is the first time they’ve collaborated.

The Dawoodi Bohra community has long marked the Muslim fasting month of Ramadan by assembling care packages for clients of Abode Services, much as Jewish congregations collect contributions for food banks around the High Holidays. Usually, the Dawoodi Bohras come together and assemble the packages at a festive community event.

‘My children look forward to it every year,’ said Yusuf Asgerally, the father of a 5-year-old and an 8-year-old, who has been coordinating the effort for the past five years. But last year, during the pandemic, members had to assemble the 200 packs in their own homes.

This year, Asgerally recognised that the needs were even greater because of the pandemic and the related economic downturn, so he decided to reach out to Temple Beth Torah and suggest they join forces. The synagogue leadership accepted almost immediately.

Leaders from the two congregations originally had hoped that each would raise money and buy the supplies and then congregants would meet to assemble them together.

‘We were hoping we could do this together and bring the kids in and even have a conversation about the connections within the community and those sorts of things,’ Ezzy said.

However, the public health guidance at the time didn’t allow that, so instead, they assembled the packs separately and a few representatives met to do the deliveries together.

Louis Chicoine, chief executive officer of Abode Services, said the donated snack and hygiene packs will be distributed to unhoused people over the next few weeks.

‘Unfortunately, we have a lot of people living on the streets in the Bay Area and they face great nutritional and hygiene needs,’ he said. ‘These packs are a quick way of getting sustenance and supplies to people.’

‘This collaboration is a great example of how faith communities can work together,’ he added. ‘Particularly with world events right now, it’s powerful to see Muslims and the Jewish community work together.’

Ziman said Temple Beth Torah has already committed to participating in next year’s Ramadan donations to Abode Services, and representatives of the two faith committees hope to plan other joint events. ‘We talked about having volleyball games,’ said Ziman. ‘We’re just waiting for the Covid restrictions to ease up a bit.’