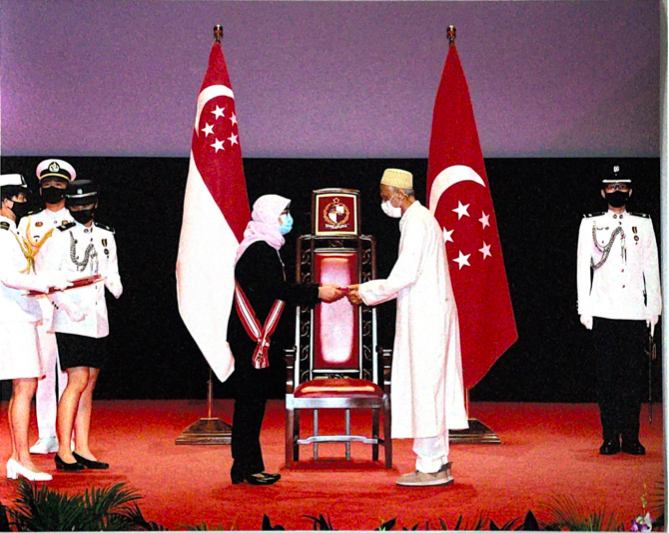 Mr Izzuddin Taherally from Singapore was recently conferred the Public Service Star (BAR), the highest Singapore National Day Award (social service sector) by Her Excellency the President of the Republic of Singapore Madam Halimah Yacob in recognition of his extensive contributions in the social service sector through the years. The Award ceremony was delayed due to the Covid-19 pandemic and was held on the 4th of April 2021.

Mr Izzuddin Taherally is an Engineer, philanthropist and a committed worker for social causes in Singapore for more than fifty years now. He has been associated with several welfare organisations throughout his life and has played prominent roles in two major organisations, namely: 4PM and Yayasan Mendaki, where he has served as president of the board for thirty years and board member for 19 years respectively. The said organisations were set up with the goal to improve literacy amongst the lesser educated sections of society and help younger generations develop the necessary skills required to tackle the challenges of future economies.

Mr Izzuddin faced tough times early on in life when he lost his father at the early age of 11 years. At the time, hardships left him unable to afford a proper home and even cut short his educational pursuits so that he could work and support his family. Against all odds, he worked hard to uplift himself whilst maintaining balance in his roles of husband, father and social mentor in equal measure. His resilience in the face of adversity and subsequent rise out of it is what propels him to do the same for the lesser fortunate sections of society.

Giving insight into the programmes he was involved in at 4PM, Izzuddin says: ‘In addition to the material help that we provide to the less fortunate, we also hold workshops to equip them with the skills required to succeed in life; which helps them uplift themselves and their families out of their dire situations.’

The organisation also has a pan-Singaporean agenda where it looks to extend help to everyone in need irrespective of their religion or age.

‘We also do programmes according to the need of the hour,’ added Izzuddin, ‘for example, in light of the pandemic, we conducted a programme titled Seniors Go Digital which looks to help senior citizens adapt to the changing times and become more used to the trappings of the digital space. We know that they are affected and just need a guiding hand to make them more comfortable tapping into the digital world. Some of our beneficiaries are now more comfortable using PayPal and connecting via Zoom.’

Izzuddin is also an active member of the Dawoodi Bohra Community helping in the establishment of its Anjuman e Burhani (community organisation) back in 1998 and more recently, the Qutbi Charitable & Religious Society which provides Qardan Hasana or interest free loans to community members.

In 2005, Izzuddin was appointed Justice of Peace and in 2015 presented with the MUIS Outstanding Award. He was awarded the Public Service Medal (PBM) in 1995 and was conferred the Public Service Star (BBM), a prestigious national award, in 2008 for distinguishing himself in various voluntary fields and rendering valuable public service to the people of Singapore.

For Izzuddin social service has always been a collective success. ‘Although I might be the president of the board, this is a job of many people. The success of any social endeavor depends on two things: A strong management team, and an equally strong structure of the support staff,’ says Izzuddin. He truly believes that rendering service to society also helps the individual grow in their own right. ‘The more complicated the problem, the more you push yourself to devise an innovative solution, so actually when you are helping others, you are also helping yourself,’ says Izzuddin summing up his philosophy of social responsibility.