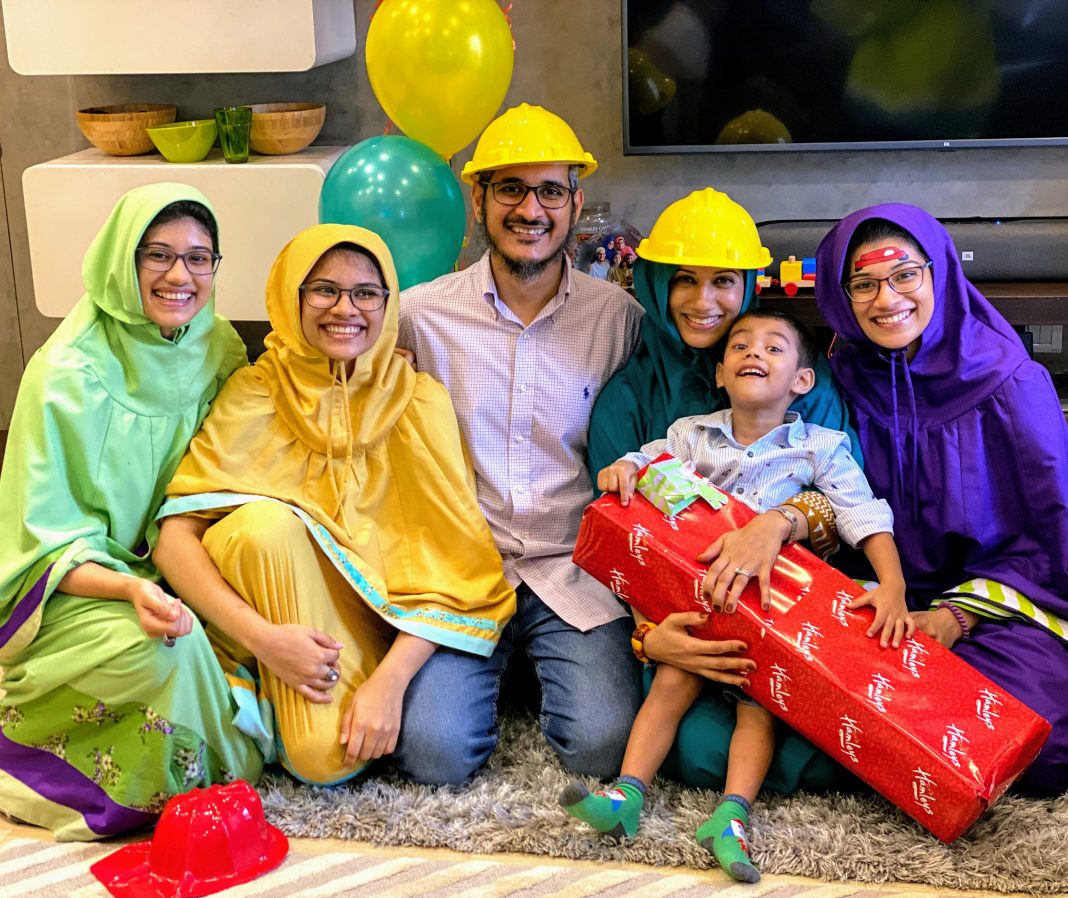 Naqiya Mufaddal Yusuf is a Mumbai-based designer, writer and entrepreneur. From creating quirky home decor merchandise through her brand ‘Random in Tandem’ to serving as an educational consultant with The Red Pen, she is constantly inspired by her spirited brood of four. In this blog piece, she delves into her experiences as a mother in the 21st century and what lessons she has learnt from her bundles of joy about parenting and life in general.

On the cusp of a new millennium, marriage whirled me away to another continent. Motherhood subsequently took me to another universe. The experience of raising children across two decades; juggling motherhood first as a young novice, and then once more at a more mature age, shaped me in ways I had never imagined.

My first tryst with motherhood was with daughters. Having grown up in a household of boys, I was alarmed at the prospect of mothering girls. I had always strived to be one of the ‘boys’ and denounced all things girly. And yet – here they were and I was clueless. Back then, Mumbai had still far to go from the developed support systems offered in the West. There were no daily bytes of wisdom or guidance from online BabyCentre newsletters or Mummy Clubs. Mobile phones were an anomaly and the internet age had barely risen. But I discovered like many others, that a woman’s gut instincts – especially when it comes to her brood – can be a very strong antidote to incertitude. And children are the biggest teachers themselves.

A young mother, by the time my peers had kids, I was somewhat of an expert. I held an advisory position on multiple mummy boards and people turned to ask me for advice. Over a decade and a half later, when I had the surprising gift of motherhood enter my life again in the form of a baby boy, I turned once more to those mummy groups in a reversed role. The challenges of today differed to the challenges of yesterday. The first time around, I had lesser information, but more intuition; absent house help, but so much more energy. Both times around though, what did get me through was establishing a ‘Swoop Troupe’. A support structure of extended family and friends who I could call on to swoop in at any given moment. I found that whilst having a meltdown, a mummy-friend-on-call could do wonders.

Secret: Your Kids are Cleverer than You

As my children grew, so did I.

Their inherent goodness and active creativity taught me to listen to their cues. The younger they were, the stronger those indicator lights shone. My kids have equally pulled me up for a misdemeanor against a sibling or squared off an argument within a moment with a defenseless grin. Why do grown-ups hold onto so much animosity is what I get from my kids – ‘Let it Go!’

Similarly, during summer break recently, when one daughter wished to crochet round-the-clock, the other read all day and the third spent hours on photo editing – my temptation was to enroll them into a host of more ‘challenging’ activities. In an age of hyper competitiveness, I wrestled to respect my children’s autonomy without pressing my authority. But something about their dedicated recreation resonated with me and I read up about the benefits of creative pursuits. ‘The theory of relativity occurred to me by intuition and music is the driving force behind this intuition,’ Albert Einstein had reflected.Maybe crochet will unravel a eureka moment I cannot foretell yet. But the struggle of running the tightrope between Tiger Mum, Helicopter Parent and Free Range Caregiver however, is an enduring one.

Over the past two decades, the advent of technology has played a huge part in how I have raised my kids. Whilst my older children had my absolute attention when they were younger, ‘distracted parenting’ is a cause of concern with my little one. Both age groups though today have tremendous exposure. Learning is accelerated, social growth punctuated. Being heard amidst the noise is a tussle. Set boundaries and established house rules won’t help them run the last mile. Ultimately, it will be my values and not my instructions, that will influence and condition them to the finishing line.

The simple things have stayed with them the most. Cycling on Sundays and stopping at local eateries. Long road trips and the ritual of dinner being a family affair every day. Kids thrive on routine and fall back on comforting traditions. The importance of play here too cannot be undermined. Break out family workouts (wielding toddlers across the room can be a great strength exercise) after a stressful day and a syndicate of Connect 4, UNO and Monopoly Deal rounds dispel the lowest of moods.

Perhaps one of the biggest maladies of parenting, is sticking to your guns. Whatever your micro-culture or moral compass is, stay with it – because everyone is watching. When a daughter became homesick at a prestigious university, we brought her back home despite a flailing feeling of failure. Her subsequent flourishment taught me a valuable lesson that losing face in front of the world is nothing compared to failing in your primary role as caregiver.

When another daughter faced a crisis in the heart of teenagehood on whether to adopt her community attire or leave her school (as the school had a strict uniform policy), the whole family stumbled for a bit. At the heart of the conflict stood the question of identity. In the end, she chose to change schools to a place where, in a marked difference, they not only welcomed her, but celebrated her. When she spoke about her coming-of-age story on her school Ted Talks platform, my heart skipped a little beat. We had done alright. She knew who she was. She would be OK.

The Panacea for Pandemic Burnout

They say hindsight is 20/20. The past year has served just that purpose. So much reflection has led to so much clarity. At the advent of the pandemic, whilst everyone was trying to find their ground, I consciously joined two online groups – NYT Cooking and NYT Parenting. Clearly, my priorities were set. Managing a hungry household, ‘Quarenteens’ and a three-year-old who defiantly announces to every police officer standing guard that ‘I’m going to put Corona in a cage,’ is no easy task.

In his book, ‘Raising Kids to Thrive: Balancing Love With Expectations and Protection With Trust,’ Dr Ginsburg puts forward a solution in what he calls ‘lighthouse parenting.’

‘You should look down at the rocks and make sure they never crash against them and prepare them to ride the waves.’

In the grey area of just beyond hand holding, is where the miracle of motherhood is realised.