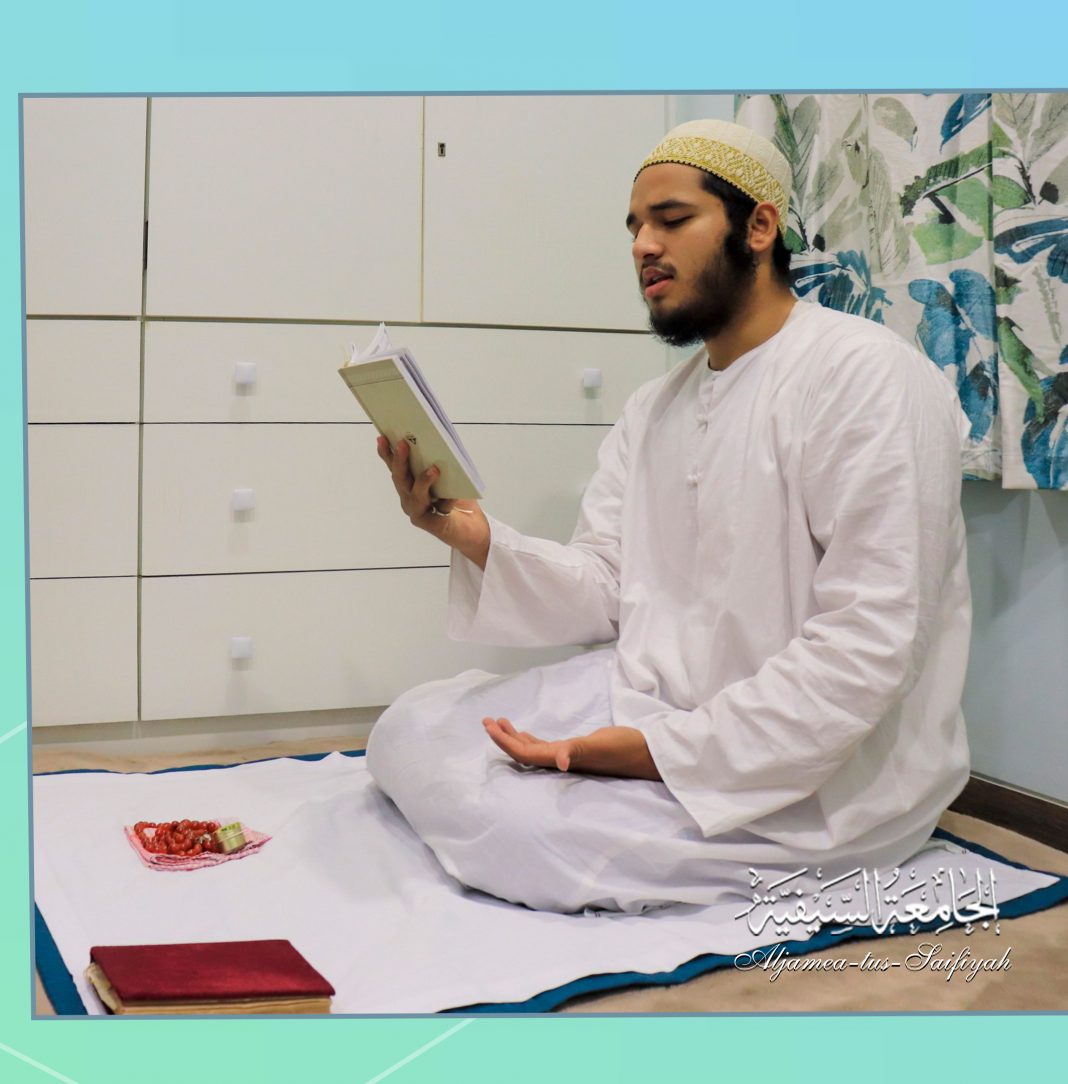 Renowned for his piety and dedication to the Almighty’s worship, Maulana al-Imam Ali bin al-Imam al-Husain is famously known as Zayn al-Abideen, Adornment of the Worshippers, as well as al-Sajjad, the one who prostrates frequently. Historical accounts report that he completed a thousand rakaat (pl. of raka, the basic unit of Muslim prayer, namaz, consisting of a bow and two prostrations) every single day.

The Imam also authored a number of supplicatory and petitionary prayers which eloquently capture the intimate relationship between the worshipper and the Creator, shed light on the intricacies of the human condition and offer insight into Islamic concepts of atonement, mercy and intercession. Bequeathing the knowledge and wisdom of these supplications to his son and successor, Maulana al-Imam Mohammed al-Baqir, they were memorised and shared with their followers and the larger Muslim community and were eventually compiled into a collection that came to be known as al-Sahifa al-Sajjadiyya.

Recitation of prayers authored by Imam Ali Zayn al-Abideen have a significant role in the Dawoodi Bohra community’s traditions of worship and devotional practices. Beyond acting as supplements to night prayers often referred to as tahajjud and their daily recitation during the holy month of Ramadan, Imam Ali’s supplications have influenced and shaped much of the supplicatory, devotional literature authored by the Dawoodi Bohra community’s leadership.

At the behest and guidance of His Holiness Syedna Mohammed Burhanuddin and His Holiness Syedna Mufaddal Saifuddin, Aljamea-tus-Saifiyah in recent times has had the honour of publishing these Arabic prayers along with their Lisan al-Dawat (the vernacular of Dawoodi Bohra community) translations for dissemination and use within the wider Dawoodi Bohra community. Aljamea-tus-Saifiyah students and faculty, during their month-long sojourns for community service during the holy month of Ramadan, also have the honour of reciting these prayers aloud to members of their congregation when leading worship. The literary merits of the prayers, and the various themes and subsequent works they have inspired, are studied at the Academy and have been the subject of a number of student and faculty research projects. Aljamea-tus-Saifiyah’s library also houses one of the earliest known offset/lithographs of a prominent commentary on the Sahifa. Printed in 1271AH/1854CE, Riyad al-salikin fi sharh sahifat Sayyid al-Sajidin is a well-known commentary of al-Sahifa al-Sajjadiyya written in Arabic by al-Sayyid Sadr al-Din Ali Khan al-Husayni al-Shirazi. As such, Aljamea-tus-Saifiyah has been honoured with the service and preservation of both the spiritual and material legacy of this most treasured collection of prayers, often referred to as the Psalms of the Household of Mohammed.

The words and prayers of Imam Ali Zayn al-Abideen are especially pertinent during these difficult times as the world, and specifically India, face the challenges of the global pandemic. During this holy month, Aljamea-tus-Saifiyah students and faculty pray for those affected by the pandemic and join the larger Dawoodi Bohra community in offering what support and assistance they can. May Allah the Almighty protect all humanity, reward those on the frontlines for their dedication, grant strength to the bereaved and afflicted and swiftly deliver us from this peril.