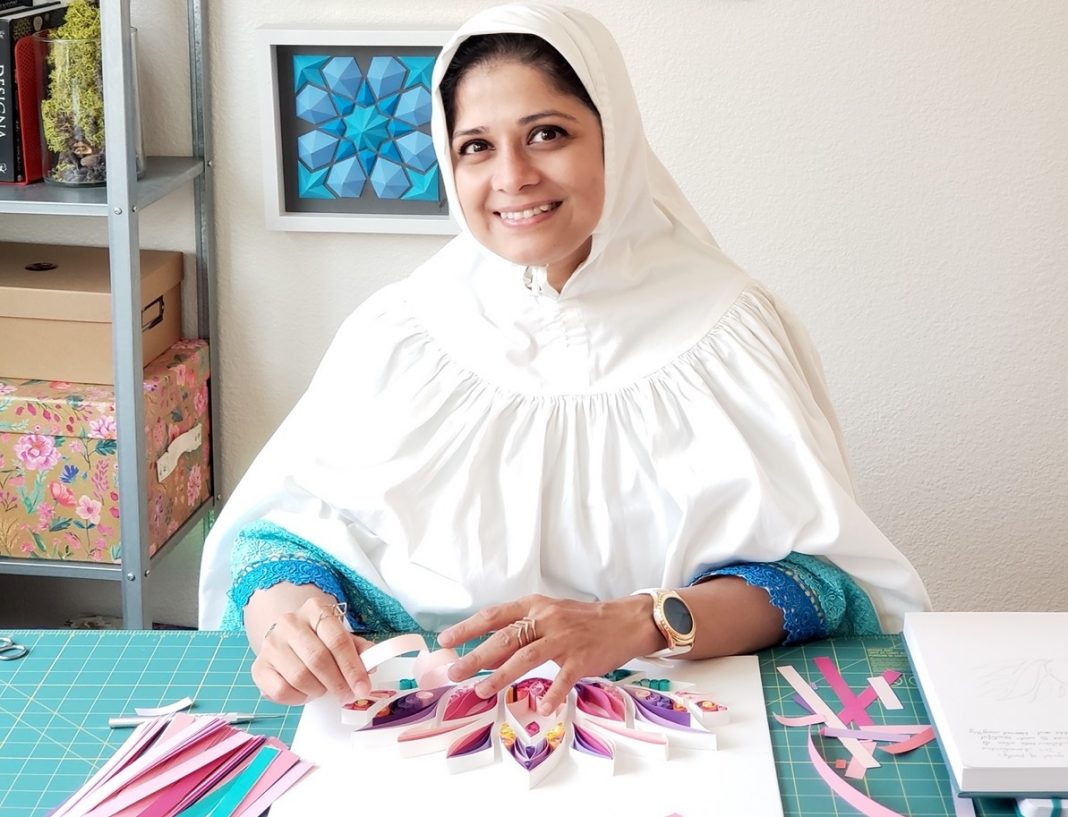 Zahra Ammar is a quilling artist with a taste for literature, a love for geometry and a knack for creativity. Her quilling expertise is the consummation of an assortment of experiences which have shaped her outlook and inspire her art. In this feature article, she recounts the milestones of her journey as a quilling artist.

For Zahra Ammar from Houston, Texas, creativity does not come by waiting for things to happen, but rather through constant practice and a never-say-die attitude despite daily struggles and setbacks.

If there is one word that could best describe Zahra’s creative journey, it is serendipity. Having spent most of her 20s in the Middle East, Zahra absorbed the Arabic geometric patterns and floral designs prevalent in her architectural surroundings. These instilled a deep appreciation for geometric patterns in her. Little did she know that her experiences would become vitally relevant to her after settling in the United States.

Her initial interest in quilling came when her sister-in-law, a fellow creative, gifted her a toolbox of quilling materials. So began her conversation with paper and putting its pliability into perspective. Quilling is a type of ornamental craftwork involving the shaping of paper, fabric, or glass into delicate pleats or folds, and in Zahra’s case, paper is the primary resource of her art.

Although she had never engaged in quilling, the prospect of doing it first-hand intrigued her. ‘There is something about the process that is appealing and attractive. Paper art has that feel-good quality about it that makes you yearn for more. That’s why people are so fascinated by quilling designs and use them as markers to style gifts.’ notes Zahra.

Her creativity also blooms from the fact that Zahra is an avid reader and a poet. Her first work titled ‘Spring Delusions’ is a collection of poetry that gives insight into her thoughts and feelings. Zahra believes that being exposed to many types of literature gave her a voice to express herself, boosted her morale and gave her the imagination to think more creatively. With quilling, she found another avenue of expression and began a journey of creating and crafting in unique and thought provoking ways.

When she started quilling, Zahra did not have the right tools nor the necessary expertise, as the art of quilling had long been out of fashion. However interest in quilling piqued when it began to attract attention on internet platforms and through social media. She began to learn it through a hands-on approach by connecting with fellow creatives and experimenting with different ideas.

Before she began to quill Zahra was a full-time professional teaching Economics, Business Studies and English in addition to being a dedicated homemaker. In the beginning, it was difficult for her to juggle everything together. The struggle was real, but she kept the flame of her newly-found passion burning.

From early on, Zahra understood that people expected professionalism and she made it a point to reflect that in her approach. Getting organised and being punctual helped her keep procrastination at bay. Even though she was self-employed and not answerable to anyone, she made it a point to not deviate from the schedule she had set for herself. ‘The idea of going to the studio, even though one doesn’t feel like it some days, has many passive benefits,’ maintains Zahra.

In Zahra’s case, floral and geometrical designs have come to define her work. She says both are complementary because they share the element of symmetry.

About flowers, she says that she is naturally attracted to their beauty and fragrance. Being an avid hiker and an outdoor person, she has always cherished her connection with nature and let the beauty of flowers fill her heart with joy to such an extent that she tries to manifest that emotion in her quilling.

Zahra believes artistic genius can be earned only through perseverance, humility and constant practice. She understands that humility keeps the door of learning open and keeps ostentation at bay which she believes leads to failure. She says the most successful artists are usually humble. She adds that sometimes it is also a question of personalities, where an artist might be an introvert, but her art may speak louder and vice-versa. But the bottomline is that humility is a virtue that elevates an artist’s capacity to innovate.

A challenging time for Zahra was showcasing her work to the world. The first time she got an opportunity to display her work titled Spring Delusions at an art exhibit, she was petrified at the thought of people judging her work. ‘When you are creating, there is a battle against self-doubt, because in one sense, you are putting up your work – which through the entire process has become a part of you – for people’s judgement. It’s hard not to separate the two.’ observes Zahra.

She says she has come to realise that people have the right to opine, for better or for worse. With time, she has grown to appreciate feedback and criticism and tries to become a better artist with every learning opportunity.

Having had to constantly reinvent her style, Zahra greatly appreciates the value of being resourceful. ‘If you want something you should try to achieve it using whatever resources are at your disposal. I do believe that living with failure will be more acceptable to me than the regret of not trying at all,’ quips Zahra.