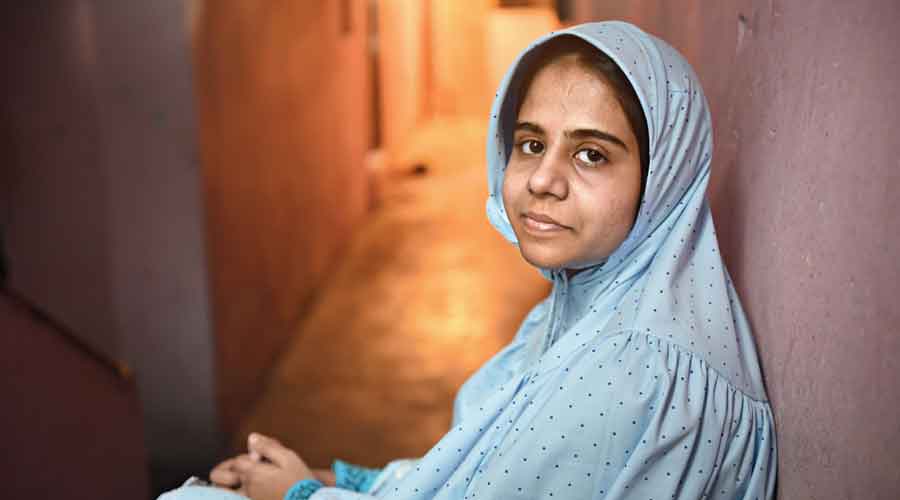 Zahra Patel has walked down to the petrol pump near Jora Girja on Lower Circular Road to take me to her home. It is in a lane that branches off from the main road. She lives in a small two-roomed flat in a building that houses many families. Zahra, who is 20, is a quiet, soft-spoken person with her petite frame covered in a burqa. But there is about her, and her eyes, an intensity that is immediately arresting.

She can recite the entire Quran from memory. She had completed memorising the holy text when she was 14.

We settle down in her bedroom. On the bed is flung a copy of To Kill a Mockingbird, which she is reading.

She belongs to a Dawoodi Bohra Muslim family from the city. From a very young age, Zahra felt drawn towards prayers. As a child, she had memorised the five daily prayers. ‘When I was about eight, I came across a panegyric by Syedna Taher Saifuddin on Imam Husain, the Prophet Mohammad’s grandson, who was martyred at Karbala,’ recalled Zahra. ‘I memorised all the 51 verses,’ she said. She also memorised a panegyric on the martyr by Syedna Mohammed Burhanuddin, which consisted of 52 verses. The spiritual leader of the Bohra community holds the title ‘Syedna’. The current leader is Syedna Mufafddal Saifuddin, son of Syedna Mohammed Burhanuddin.

She did not know Arabic then. She was a student of Saifee High school (renamed Saifee Golden Jubilee English School), off Park Street, where her teachers recognised her gift. Now she is a resident student at Aljamea-tus-Saifiyah, the university set up by the Bohra community in Surat, Gujarat, a centre of religious education. Zahra is in Calcutta at the moment because of the lockdown. She is highly proficient in Arabic now.

At eight, Zahra began to learn the Quran by heart, starting with the last three siparas (chapters), considered ‘the easiest.’ Learning the Quran was an inner compulsion. ‘I did not understand the words well, but was fascinated by their idea,’ she said.

‘There were distractions,’ she said. She has three elder siblings. Her brother, the eldest, is an engineer settled in London. One of her sisters is married in Surat, the educational and cultural hub of the Bohra community in India and another is about to receive her MBBS degree from Murshidabad Medical College. A decade ago, however, they were all growing up together and one effect was a lot of noise. Computers would buzz and the TV would boom. The school syllabus was demanding. ‘It was difficult,’ said Zahra, who was a shy child, prone to migraine attacks.

But she had a vocation. She brought to her practice of memorising the Quran a discipline, even a severity, unusual for a child. No one had asked her to. Her parents, a friendly, hospitable couple — her father a businessman and her mother a homemaker — have been strongly supportive of their daughter, but without imposing any of their beliefs on her. ‘They are ‘neutral’. So every day, for one hour, I memorised the Quran, sometimes three to four pages a day.’

By the time she was in Class VI, she had memorised the first 14 siparas. ‘It helped me,’ she said. ‘I had a few problems.’

When she was nine, she won a competition open to all ages in her community with her Quran recitation. The next year, 2010, she was chosen to welcome Syedna Burhanuddin with a bouquet of flowers on his visit to Calcutta. Syedna placed his hand on her shoulder. ‘He blessed me,’ Zahra said.

Her school teachers then urged Zahra to take the next big step: get admission at Aljamea-tus-Saifiyah in Surat. She was 13.

The international university has four campuses — in Surat and Mumbai in India, in Karachi, Pakistan and in Nairobi, Kenya. Male and female students from many parts of the world study here. Education starts again at Class I and continues for 11 years, on the successful completion of which a student is considered the equivalent of a graduate.

At the sprawling campus, ‘Where the facilities are excellent,’ her religious curriculum includes jurisprudence, history, literature and Hikmat (wisdom), taught in Arabic. Parallel to this the students study general subjects that qualify them to take A level and O level examinations under the Cambridge International board. Zahra has appeared at her O levels.

‘The first two years were difficult,’ said Zahra. She missed home. Yet when she fell ill and was diagnosed with tuberculosis in the second year, she stayed on at the hostel and was treated there. She recovered within six months.

By the end of the second year, she had learnt the entire Quran, with her ‘dedication and will power.’ In an international examination on the Quran she scored 90 per cent, the second highest.

She grew in other ways too, she said. The migraine attacks became fewer. ‘I began to take part in horse riding, swimming, cricket and table tennis.’

‘If you pray, things get better,’ she said. ‘I am happy with myself now. I have inner peace. If you commit something to your memory, especially a matter of faith, it becomes a presence within.’

She wears the burqa because it makes her feel safe, she said. She stressed that there is nothing in the Quran that gives women an inferior status. But different people interpret the text differently.

She doesn’t listen to much music other than of the religious kind. She watches Netflix, though: she is watching The Crown now. And she reads. ‘Our university has five libraries,’ she said. She loves Dan Brown, Jane Austen and Agatha Christie.

But in times of trouble she turns to the Quran, especially the 16th sipara: ‘And Allah brought you forth from the wombs of your mothers, while you were void of all knowledge, He gave you ears, eyes and hearts, so that you might render (Him) thanks.’

Zahra, whose name means bright and shining, has known difficulty and has overcome it with faith, which also helps one, especially a young person, to negotiate that most challenging of crossroads, between tradition and modernity.