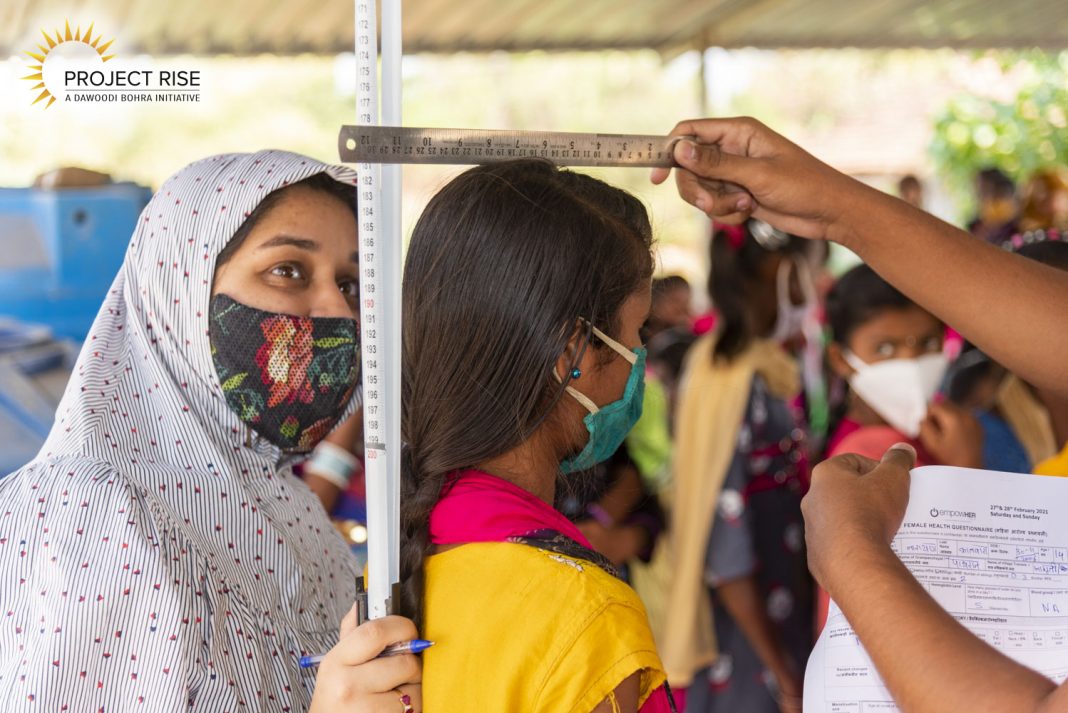 Over 550 adolescent girls from 34 different villages benefited from a health camp organised by Project Rise in association with empowHer India, Saifee Hospital and the Rotaract Club of Bombay Midtown. Addressing the condition of Anaemia, the camp was held on the 27th and 28th of February 2021 in the Karjat Taluka of Maharashtra.

Anaemia is a condition in which the number of red blood cells or the haemoglobin concentration within them is lower than normal. This results in symptoms such as fatigue, weakness, dizziness and shortness of breath, among others. According to the National Family Health Survey 2019-20, Indian women & children are overwhelmingly affected by this deficiency with almost 60% of adolescent girls in Karjat Taluka being anaemic.

EmpowHer India CEO, Anamara Baig said: ‘The lack of primary and specialty care in Karjat Taluka coupled with poverty and lack of awareness has led many young women to neglect their health… The primary purpose of this medical health camp is to detect anaemia and to spread awareness about the importance of female adolescent health.’

Doctors from Saifee Hospital distributed free-of-charge medicines amongst the girls while volunteers from the Bohra community’s women associations; At-Talebaat ul-Mumenaat and Burhani Women’s Association counseled the young girls on the importance of maintaining health, hygiene and sanitation.

Amatullah Motorwala, a volunteer, said: ‘The girls were chirpy and cheerful and were looking forward to engaging in dialogue with us. Education is an issue here as most of these girls admitted they do not pursue higher education.’

Speaking about the issue of Anaemia, she said the girls were counseled on the importance of maintaining a nutritious diet. ‘We told them to include a lot of veggies in their meals so as to increase the intake of left out nutrients. They said they would communicate the same in their homes,’ said Amatullah.

‘As we celebrate International Women’s Day on the 8th of March and the important roles played by women in society, it is all the more fitting to empower such young girls by educating them about the importance of a good diet and a healthy lifestyle,’ added Amatullah.

This is the second consecutive year that an Anaemia Camp has been conducted by Project Rise, the Dawoodi Bohra community’s philanthropic arm. In addition to the Anaemia camps, water security initiatives undertaken by Project Rise have also made a positive impact on the lives of more than 500 families living in the region.