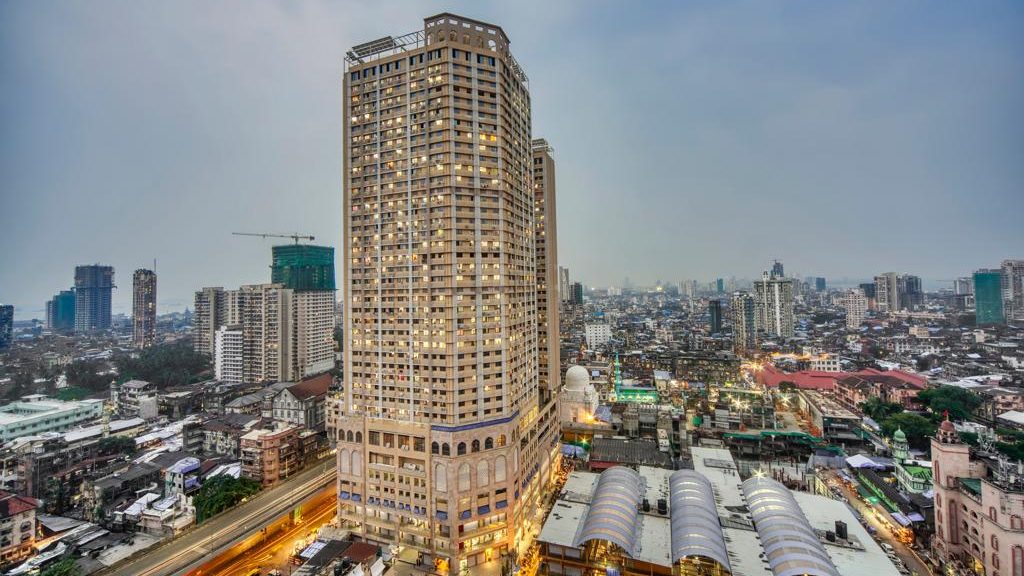 Thirty five year old Amena Shaikh looks back fondly at the year that has been. Just a few days before the lockdown, she moved into her new house in a plush high-rise on the 35th floor with a spectacular view of the city.

‘It was a blessing. We thoroughly enjoyed our new house during the lockdown. Our house has a great view,’ said Shaikh, a homemaker. ‘There is a children’s play area on the seventh floor, so my two children (aged seven and six) too got some relief during the lockdown.’

Shaikh’s family is one of the beneficiaries of the ambitious Bhendi Bazaar redevelopment project, Mumbai’s largest urban renewal scheme.

In 2020, the project, sprawled over 16.5 acres in South Mumbai’s thickly-populated and decrepit Bhendi Bazaar cluster, reached a milestone of completing its first phase with a fifth of the residents in its scope moving into two tall towers. The entire project is expected to be completed by 2025.

The redevelopment is being undertaken by the Saifee Burhani Upliftment Trust (SBUT), a non profit organisation established by Syedna Mohammed Burhanuddin, the leader of the Dawoodi Bohra community. The Bohras form about 85 percent of the population of Bhendi Bazaar.

The Bhendi Bazaar cluster redevelopment project involves the metamorphosis of a century-old South Mumbai area made of crumbling, dense bazaars and residential buildings that have over the years been battered by inadequate infrastructure and neglect by civic authorities.

The project involves rehabilitating 3,200 families and 1,250 shops across 16.5 acres by demolishing more than 250 dilapidated buildings and rebuilding the area with 13 new buildings, wide roads, open spaces and well-planned commercial areas and social amenities. The total project cost is over Rs 4,000 crore.

‘The first phase of the project comprising two towers named Al- Sa’adah got completed last year and since then shop owners and residents have been moved to these rehab towers in phases,’ an SBUT spokesperson told ThePrint. ‘Residents started shifting to the new premises at the start of this year. But due to the lockdown in March, the shifting process was put on hold, and was resumed once the regulations were relaxed.’

The towers have come up on one acre of land, replacing 13 unsafe buildings.

SBUT now hopes to complete the entire second phase of the redevelopment, a lion’s share of the project, by 2025.

According to information from the SBUT, almost all of the 3,200 families have vacated their old houses. Similarly, 1,150 of the 1,250 tenants have moved to either commercial transits or on a rental basis. Of the 250 buildings that are part of the project, SBUT has already demolished 230 and the demolition of the rest is under way.

‘We are waiting for an approval from the civic body and the government’s high power committee for cluster redevelopment for our master plan for the second phase and we expect to have it soon,’ the SBUT spokesperson said.

The project also includes the redevelopment of Haji Ismail Haji Habib Musafirkhana, a building in Bhendi Bazaar where gangster Dawood Ibrahim once lived. The Supreme Court, however, stayed the redevelopment of this building in October this year while hearing a petition of the Maharashtra State Board of Wakfs against the sale of the building to SBUT. The board argued that the building was a Wakf property and could not be sold.

The SBUT official quoted above, however, said the order is just for one building and work on the other sectors is under way.

The redevelopment of Bhendi Bazaar was conceived in 2009 when the SBUT was formed. The trust obtained the state housing authority’s letter of intent to undertake the revamp of Bhendi Bazaar in 2011, and Syedna laid the project’s foundation stone the same year.

In 2011, SBUT started moving residents to transit homes bit by bit and started demolishing buildings in 2012. Back then, SBUT hoped to complete the entire project by 2023, but the process of getting approvals and certification procedures in the redevelopment turned out to be more time consuming.

The SBUT official said being a first of its kind project in the country, the redevelopment still continues to be a learning curve for all stakeholders, including regulators, governments, local body officials as well as residents and tenants.

‘Given the complexities of the scheme and the area itself, the approval and certification processes are quite cumbersome and time consuming,’ he said. ‘Additionally, for any redevelopment project to succeed, convincing tenants to move out to the area to facilitate new construction is always an enormous challenge. Sometimes people are emotionally attached to their old and dilapidated premises and it becomes challenging to move them to temporary accommodation facilities.’

The construction of the Al-Sa’adah towers eventually started in 2016.