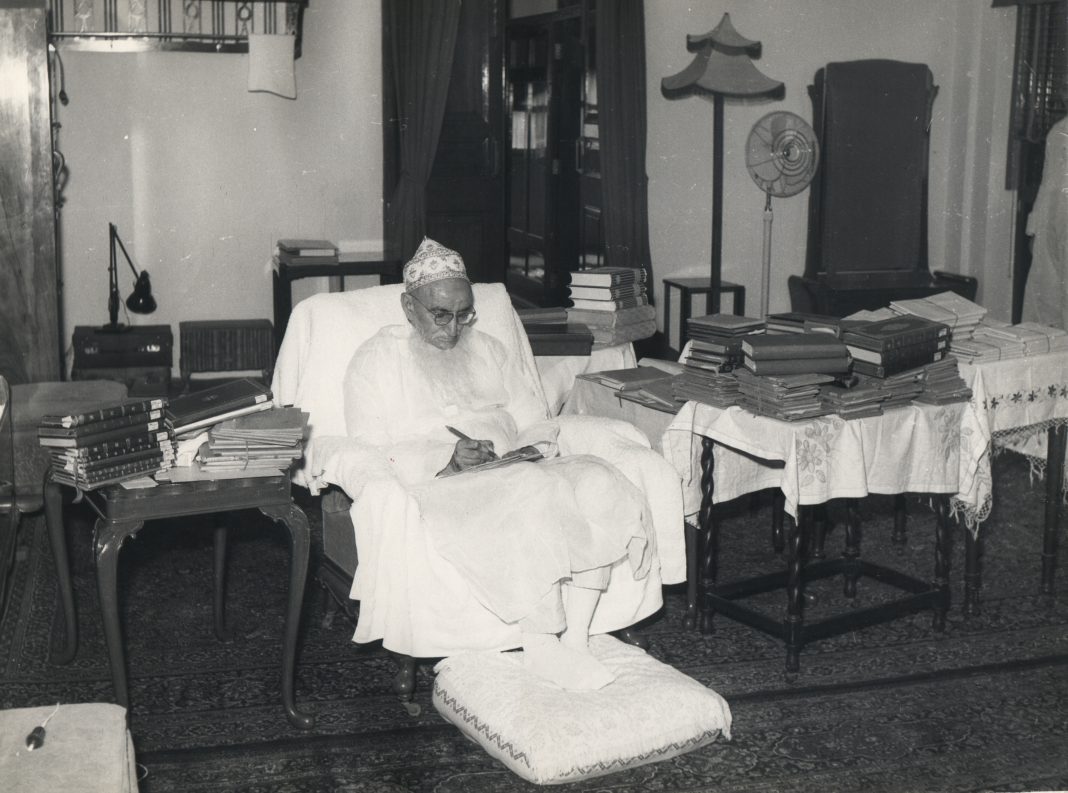 His Holiness Dr Syedna Taher Saifuddin delivered a speech at al-Kulliyah al-Islamiyah (The Islamic College), Kurnool on the 25th of September 1955. Below is an English rendering of that speech.

In the name of Allah, the most Merciful, the most Compassionate.

All praise be to Allah, the Lord of the Worlds. Salawāt (blessings) and salaams upon His Prophet Mohammed SAW, and upon his progeny and noble companions.

Honourable friends! I find my heart filled with joy upon being invited to this educational congregation and to this prestigious college. As I look at these dear students today and their faces, which are ready to accept the radiance of knowledge – I am unable to conceal a deep affection towards them as well as a strong sense of fondness for them and the bright futures that await them.

As I have spent most of my life in the pursuit of knowledge and in its dissemination amongst the learned – strengthening its (knowledge) foundations, and adding grace to its gatherings – I have not found anything more important, pleasant or agreeable than the moments, hours and days that have passed in this noble and exalted endeavour.

If we look at knowledge in its truest sense, it is a blessing from the Almighty which is a hidden entity latent within the human form. Indeed, taʿ līm (education) is the [process of] extracting that latent entity. The holy scriptures were revealed for this purpose as has been stated in the Quran ‘nor anything fresh or dry (green or withered) but is inscribed in a record clear.’ (6:59) In another instance, Allah most exalted states: ‘It is He Who has taught the Quran. He has created man. He has taught him speech (and intelligence).’

When man undertakes the task of educating others, he is doing service to the Lord, the Creator, for the benefit of His Creation. Those who carry out this service as ordained by Allah [whilst] treading His path, are worthy of multitudinous rewards. And those who engage in this task while veering from the path of His guidance, following their whims, have indeed altered Creation, changed its form and followed the one who has in the past challenged the Lord; as narrated in the holy Quran: ‘Surely I will mislead them and I will create in them false desires; surely I will command them and they will change Allah’s creation.’ (4:119).

It is necessary for me to state here that ‘change’ and its effects can manifest in two ways – either by ignoring ‘deen’ (religion) which is Allah’s sunnah (path), or by ignoring dunya (the temporal world) which is His creation, while the truth is that deen is not merely fasting and praying, rather it is to strive and to prosper in both worlds.

(couplet) Dīn and dunya correspond to each other, and are balanced like the balancing of the weighing scale.

Verily, it is this balance between the two which is the middle way, the path of those who have been alluded towards in the Quranic verse: ‘Thus we have made of you an Ummat justly balanced that you may be witnesses over the people and the Messenger a witness over you.’ (2:143).

It is that middle way which teaches people balance in all aspects and throughout the course of their lives. If we were to apply this notion to a broader line of action, we would find a solution to the biggest problems faced by the world. A world torn apart by the darkness of partisanship and the pitfalls of extremist ideologies; the middle way is truly the path leading to harmony between all peoples as well as peace throughout the world.

This subtle meaning has been explicated by a certain erudite scholar in a most elegant manner:

He states: We have heard that a group of the faithful and a few missionaries of the Faith said to their teacher: ‘Indeed you have liberated us by making us aware of something which necessitates gratitude on three fronts:

Hence, explain to us what must be done by those who wish to offer gratitude. Then make us aware of the necessary prerequisites that are incumbent upon us and what is required of the seeker in his questioning and of the one from whom it is sought in his answering. Also make us aware, as far as is possible, of the beliefs of the virtuous and of the etiquette of those who seek. The teacher replied: ‘That which I have called you towards, is indeed what Allah has treated with honour for His subjects and made perfect for them and treated with honour by it, those who embrace it…. As for gratitude towards the teacher, it is his obedience. As to gratitude for knowledge, it lies in acting according to knowledge and calling others towards that knowledge. It has been narrated from the Prophet Mohammed SAW that he states: Four things are incumbent upon every intelligent and sensible person from my umma. He was asked, O Rasūl Allah (the Messenger of Allah) what are those four? He stated: ‘[Keenly] listening to knowledge, safeguarding it and acting in accordance with it as well as disseminating it. According to another source, the Prophet SAW states: ‘He who learns in his youth, it as though it is engraved in stone and he who learns in old age it is as though it is being written upon the surface of water.’

As I congratulate the graduates who have obtained these degrees, I call upon them and all the other distinguished students to keep before them — as an ideal to be emulated — this ‘educational movement’ that has given us this grand college and other affiliated religious seminaries and educational institutions. Indeed, the success that this movement has attained is the result of sincere intentions, far reaching vision and overcoming every difficulty through persistence and perseverance in action. May these, O’ bright students, remain your principles in your educational lives, so as to aid you in succeeding in the numerous stages of education in all its varied fields. May all of these principles continue to lend beauty to your days. May your educational atmosphere be free from the turmoil that disrupts the system and deprives you of peace and security, because the system of education needs peace and tranquillity as well as complete dedication to learning without any distractions.

Indeed, the people of the country harbour aspirations for your bright future as you graduate from this institute. It is up to you to realise those aspirations and bring them to fruition through proper endeavour and intelligent effort.

The Prophet Mohammed SAW has stated: ‘Whosoever presumes good of you, you should live up to/justify their presumption.’

I pray to Allah to guide us all towards good deeds and words and to inspire us (to do) that which makes Him happy and brings us closer to Him. Indeed, He is the one who listens to our supplications and answers them with swiftness. Our final prayer is that all praise is to Allah, Lord of the worlds.