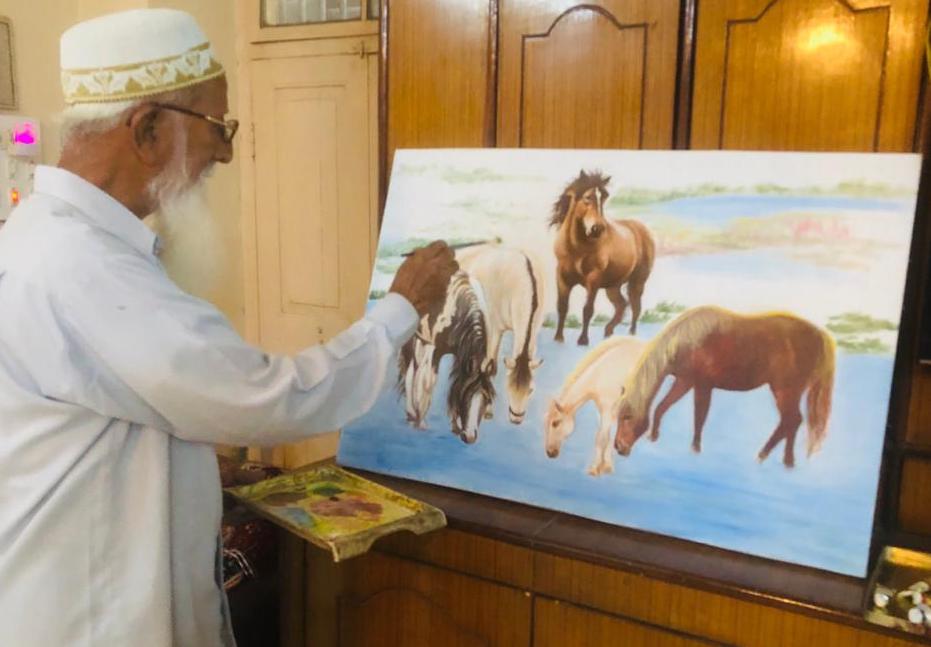 Zulfiqar Husain from the princely city of Burhanpur in the state of Madhya Pradesh is an individual who connected with his love for art at a young age and as time went by, continued to excel. He began his bonhomie with painting at the age of 12 when he met a friend’s father who designed advertisement boards. The design and artistry sparked a curiosity in his young mind and at that moment the seed was sown for what would blossom into a lifelong love and passion for art.

Burhanpur was long a cultural centre in medieval India and today boasts a legacy of numerous heritage sites. A magnificent palace from the time of the Mughal era located on the eastern flank of the Tapti river still showcases exquisite carvings, sculptures and intricate paintings. Interestingly, one of these paintings depicts a monument which is said to be the inspiration for the Taj Mahal.

Today, the Bohra community’s Dargah-e-Hakimi stands out as one of the most serene and tranquil locations in Burhanpur. A revered pilgrimage site, the lush and well pruned gardens flanking the brilliant white mausoleums are a picturesque site for an inspiration seeker. Zulfiqar derived much inspiration from this beauty at the beginning of his career and continues to do so even today.

Born and brought up in Burhanpur, he studied at the Dawoodi Bohra Community run Quaderia Burhani School, aspiring to become an engineer. As he was set to emigrate to the United States to work, a tragedy at his father’s shop convinced him to stay back and help his family during that difficult time.

However, as early as the age of 24, Zulfiqar began putting his passion into practice again. He made a painting of the business tycoon, Ratan Tata, for which he assumed that he would be rewarded handsomely. The painting never made it to the intended, but nevertheless it rekindled his conversation with art.

Zulfiqar began a laissez-faire approach to learning painting. He would draw inspiration from every credible source that he could acquire. Be it conversations with seasoned painters or publications such as ‘Art India Magazine’ and ‘Louvre’, his desire to learn about his passion began to grow and flourish.

Zulfiqar has a keen eye for detail. His paintings which include landscapes and animals – particularly horses – serve testimony to the fact that he strives to bring out seemingly obscure details. When he draws ideas from certain photographs, he prepares a graph over them and imposes that graph on a canvas board. His brush then meticulously casts the magic of colour to bring the image to life.

He has had the honour of preparing an 8 ft 3-D painting on canvas of the late His Holiness Dr Syedna Mohammed Burhanuddin RA which he presented to His Holiness RA himself. That remains one of Zulfiqar’s greatest works.

Zulfiqar says that since 2009 he has been practicing his art regularly for two hours every day. His commitment has resulted in more than 150 canvas paintings, many of which have been featured by The Radiant Arts.

With age, Zulfiqar’s youth-like pursuit for his passion keeps growing. He has two ambitions, the first is to display his art at the Dubai Business Expo. The second, which is more of an obsession, is to pay tribute to the Mona Lisa by emulating the masterpiece on his own canvas.