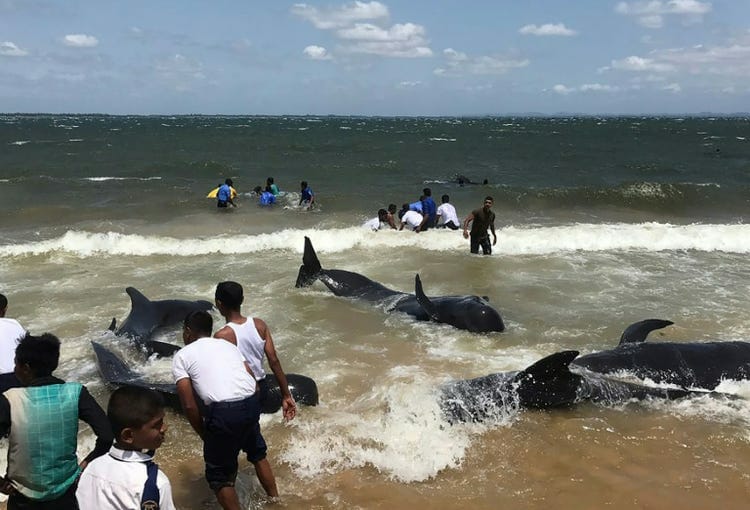 Sri Lanka witnessed the biggest-ever mass stranding of whales on the island on Monday 2nd November, when a school of over 120 short-finned pilot whales beached at Panadura, 25 kilometres (15 miles) south of Colombo.

The cause of these mass strandings remains unknown although scientists assume it could be because of the highly social nature of these animals. If one or more whales is sick or injured or strays too close to the shores and is washed onto the beach by the waves, it is likely that the rest of the pod will follow, resulting in mass beachings.

The Sri Lankan Navy and Coast Guard launched an operation to return them back to the sea and were joined by local volunteers from nearby villages. A Dawoodi Bohra business establishment, Debug Auto Exclusive, a pioneer in the boating and recreational automotive industry in Sri Lanka which maintains close ties with the SL Navy and Coast Guards, was called upon to assist with the operation.

It was important to refloat these animals as soon as possible because lying on their sides could cause the obstruction of their blowholes. Lying on the beach for more than a few hours could also cause the weight of their bodies to crush their organs in the absence of the buoyancy of the water necessitating euthanisation.

Small inshore patrol crafts were used by the Navy to pull the whales one by one into the ocean, but the high-tide after sun down made it difficult to guide whales, which grow up to six metres (20 feet) in length and weigh as much as a tonne, back into deep waters. The Debug Auto Exclusive Team, comprising of Moiz Najmuddin, Mustafa Najmuddin and Harshana Ravimal along with Sea-Doo Club members Hussain Mustansir, Shabbir Mohammed and Eshan Pieris helped pull the last (15-18) of the whales back into the deep waters on jet skis.