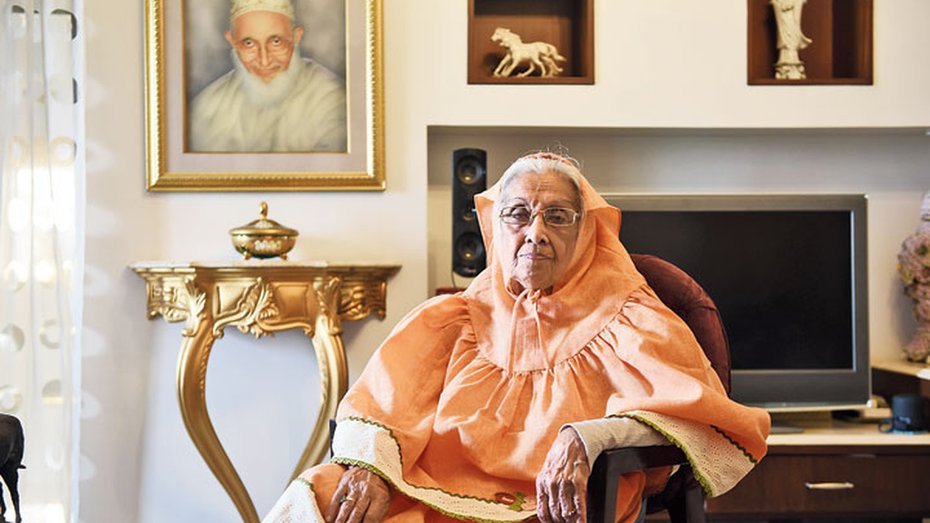 Death is a form of knowledge. And the care of the dead is one way of arriving at it. Zainab Saifuddin Bhaimia was initiated into her life’s work almost by chance. A death had occurred in the Bohra Muslim community of Calcutta, to which Zainab, ‘Zainy’ to everyone who knows her, belongs. A body, according to the practice of the community, has to be cleansed and bathed before it is buried. The last rites are performed by a group of about three or four.

Zainab was called to help when the death occurred. That was in the 70s. Since then Zainab, now 86, has been performing the last rites — ghusl — for individuals of her community. The rituals are elaborate, and they take time. The body is cleansed perfectly so that when its owner reaches the other world, he or she should be perfectly clean.

Zainab stopped only recently, about five years ago, when her health began to deteriorate. Treasured by her 4,300-strong close-knit community in Calcutta as someone devoted to its good, she feels blessed that she was given such an opportunity to serve it.

Though frail now, taking the help of a walking stick to move, she remains active. A graceful, smiling woman, she walks gently into the drawing room of the well-appointed Middleton Row flat where she lives with her son’s family. She is wearing a blue traditional Bohra ghagra and dupatta, trimmed with intricate red lace.

When she goes out, she puts on the rida, the women’s headdress. She has just returned two days ago from a visit to her relatives in the US, and jet lag is still troubling her, but she has not allowed it to subdue her. With her is her daughter-in-law Nafisa, who, says Zainab, is like her daughter. Nafisa helps to explain some of the things that Zainab talks about.

For four decades, Zainab has witnessed death from close. She has performed the last rites as a volunteer, always as part of a group. She cannot put a number to the deaths she has attended. But whenever a death would occur, the community knew she would be there.

It was also possible for her to be there because she then lived in Pollock Street, where Saifee Masjid, the century-old masjid of the Bohra community, is located. Now a new masjid, Burhani Masjid, has been built just behind Science City. The last rites are performed in a chamber at the masjid. The ceremony remains completely private; a code of conduct stops anyone from speaking about it.

Zainab would be called at any hour, midnight or later, for death hardly comes announced. She went, because she felt it was her duty to be with someone in the last hour. In the long years of performing ghusl, she has even had to attend to those who had been very close to her.

It obviously takes great courage to be able to carry out one’s work for decades in the presence of death, not to mention wisdom. But Zainab is dismissive about herself. She looks at herself as just a worker. She will only express her gratitude for being able to render this service, especially to Syedna Mohammed Burhanuddin, who was the leader of the Bohra community from the 60s and personally asked her to dedicate herself to community work. Syedna Mufaddal Saifuddin, Syedna Mohammed Burhanuddin’s son, is the current leader of the community.

‘Why wouldn’t I do it?’ she asks, referring to the first time she was called for ghusl. But she has learnt so much from her work, about life, about mortality, and about immortality.

One is the reality of death, which many of us ignore till we cannot anymore. But the continuous performance of last rites cures one of the last doubts about mortality. ‘It helps to prepare you for your own death,’ she says serenely, without the slightest touch of morbidity. ‘You should also know what death is like,’ she adds.

She also finds, in rendering the service, a spiritual satisfaction. ‘The cleansing practice is also like a cleansing for me,’ she says.

Has she ever felt scared? ‘No, why?’ she asks, looking almost surprised. Her work has also taught her the importance of good acts. ‘Don’t do anything bad,’ she says. Whatever one does, stays, long after the body has departed.

Not that she has never felt disturbed. She could not sleep on occasions. But then she is only human. She was motivated into working for her community by Syedna Mohammed Burhanuddin. He personally asked her to work for her community. ‘His blessings were always with me,’ says Zainab.

She is from Surat. The Indian Bohra community, which is now spread everywhere in the country and abroad, originated largely from Gujarat. Zainab came to Calcutta after her marriage in the early 50s. Initially, Syedna Mohammed Burhanuddin’s sister asked her to join Bunayyat al-Eid al-Zahabi, the women’s organisation of the community. Zainab performed her duties faithfully there. She was also involved in the community kitchen, an important institution.

At the beginning, when she took up performing ghusl, there were not many performing it. ‘Now about 20 women perform the rites.’ Zainab has trained a number of them.

Community work took up much of her time. She was also devoted to her family, raising two sons and a daughter. Her work has been recognised. Very proudly, Zainab asks Nafisa to show me the certificates the Syedna personally honoured her with. One is signed by Syedna Mohammed Burhanuddin, mentions ‘Wisamo Istehsan al-Khidmat’, a recognition of her service to the community. The other confers the title of ‘Mafsuhiyat’ on Zainab, for the same reason.

A few days after our conversation, Zainab let me know that she would like to thank a few people and institutions again.

Bunayyat al-Eid al-Zahabi, the women’s organisation, was formed by Syedna Taher Saifuddin, she says, and she is very grateful to it for allowing her the opportunity to work. All the work that she has done was possible with the permission of the Aamil, the local head priest. Finally, Hizbe Husaini is a committee in Calcutta which takes part in organising the last rites. It informs the women’s committee when there is a death. Zainab is very grateful to Hizbe Husaini.