Islam is replete with symbolism. Its tenets, texts, designs and architectural elements all speak of deeper meanings that dwell beneath the surface.

In this article, we take a look at the iconic minarets of Islam, their origins and what they signify.

Rooted in the Arabic manār, the minaret, which predominantly takes the shape of a slender square tower attached to a masjid is a ubiquitous structure throughout most of the world. It is also referred to as a miʾdhana or a sawmaʿa in Arabic, and its origins, the form it takes and the function it is intended to serve are subjects of much academic debate.

Some believe that the minarets of Islam trace their origin to ancient lighthouses, in particular, the Pharos of Alexandria1 or commemorative columns2. Others, more focused on the linguistic aspect of the debate trace the origin of the word manār which stems from the Arabic nār (fire) to the use of fire signals by ancient Semites3, who derived them from the ancient ziggurats4 of the Near East. Another theory suggests that minarets take after the small square cells of Syrian monks’ quarters and are seen to draw influence from church towers. In short, a diverse range of hypotheses has been drawn based on the similarities between the minarets and other buildings which are structurally comparable throughout the history of humankind and in regions as far-flung as the Indian subcontinent and Persia.

As for the function of the minaret, the present-day prevalence of the adhān echoing from sound systems mounted on top of minarets has led many to surmise that the call to prayer is their functional core and that it is for the adhān that the minaret came into existence.

Fatimi jurisprudence, however, negates this notion. It prohibits the muʾadhin (herald) from performing the adhān on any surface higher than the rooftop of the masjid so as to maintain the privacy of those houses that fall within its vicinity. This dispels the notion that minarets, which often tower well above the height of the rooftop, are intended for the adhān. Despite this understanding, the minaret still features prominently in the architecture of Fatimi masjids which tells us that it is meant to serve a purpose other than what is conventionally understood.

Although the minaret is not intended for the pronounced call of the adhān it is symbolic of a far more profound and lasting call; the call of silence. Imam Jʿafar al Sadiq AS states: ‘call towards us in silence,’ by means of your virtuous actions and just interactions. The minaret, therefore, can be thought of as a robust visual statement inviting the gaze from far and wide and effectively beckoning the masses without uttering a word.

During no other occasion is this truth more manifest than ʿAshara Mubāraka when the standards of Husain AS flutter high atop minarets of community masjids across the world, proclaiming his message of love, harmony and humanity. The flag bearing minaret attached to the masjid which in turn is the locus of Islamic thought, culture and society come together in a symbolic chain of expression to communicate to every beholder that the lofty values for which Imam Husain AS laid down his life constitute the functional core of Islamic teachings and its physical monuments. The Arabic saying: more pronounced than fire atop a signpost (ashhar min nār ʿalā ʿalam) further strengthens this notion because the Arabic manār for minaret derives from nār (fire signal), and the ʿalam (standard) atop the manār meld into a unified exclamation of the lofty values towards which these physical symbols motion. 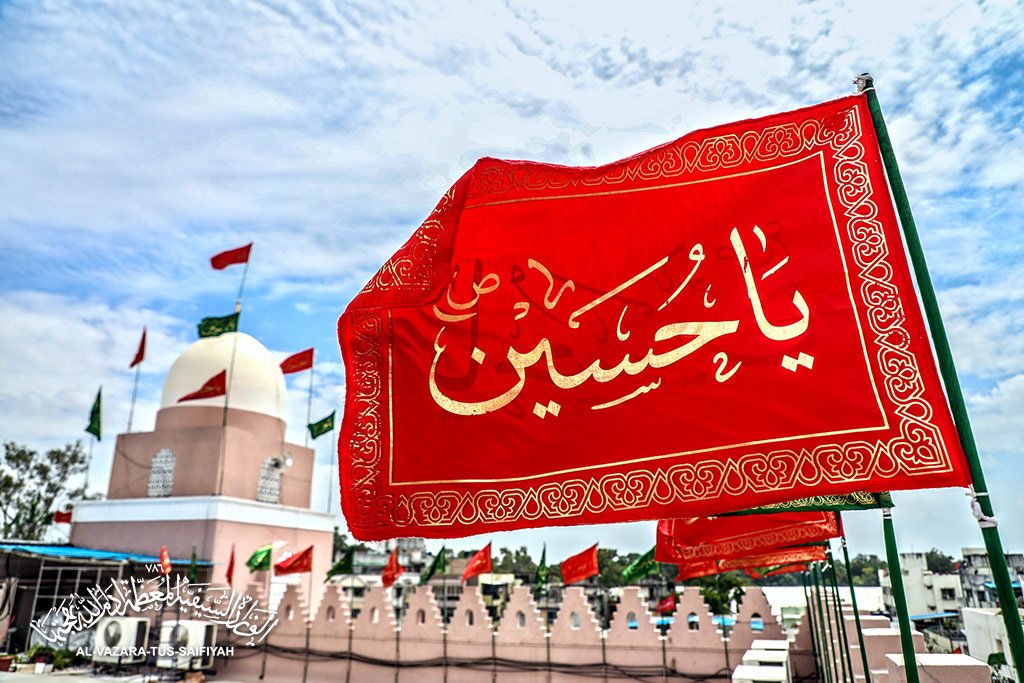 The narrative of Syedi Khanji Fir QR is one which is often repeated in community discourses. Hailing from Udaipur, he travelled to the presence of Syedna RA, a humble pupil in search of knowledge and enlightenment. Once there, he found that there was a persistent foul odour which plagued the venue where Syedna RA held his daily discourses. While others contented themselves with complaining about the smell and decrying the situation, Syedi Khanji Fir QR took it upon himself to lead by example. Under the cover of darkness and silence of the night, he started going to the adjoining alleyway where the continued improper disposal of garbage by neighbours had led to a dismal heap of rot and stench in order to clean it up on his own. This silent call of his continues to echo hundreds of years hence, like a minaret surmounted by a guiding beacon.

Imam Ali bin Abi Talib AS states in one of his couplets:

‘If your words are akin to silver o’ my soul, then indeed silence is akin to gold.’

While this may be understood as enjoining the benefits of remaining silent in certain fraught situations, a deeper meaning derived from it bolsters the notion that actions do indeed speak louder than words and are of greater value. Minarets in the Fatimi tradition tend to be topped with a golden finial, which can be understood as an allusion to this profound understanding.

This philosophy of calling in silence, striving towards higher ideals and inspiring others to do the same in an understated and humble manner – by doing rather than commanding – underscores the ethos of all Dawoodi Bohra philanthropic initiatives. Islam encourages Muslims to take action and lead by example rather than shouting from the proverbial rooftops. The Holy Quran cautions against preaching what one does not practice. Therefore, whether it be feeding the hungry, working for the betterment of the environment or something as simple as enquiring after the elders in society or the less fortunate amongst us, the Bohra community continues its legacy of impacting positive change through effective and inspiring action, beckoning as it were, in silence.