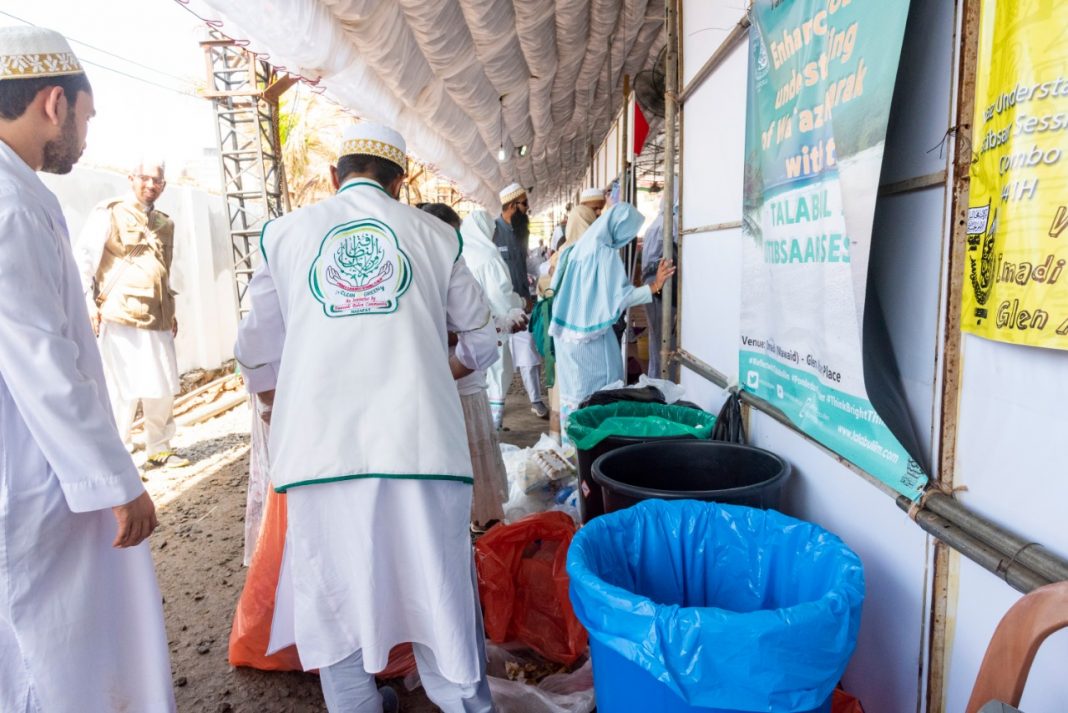 In a collective effort to minimise waste, the Dawoodi Bohra community adopted a zero food wastage policy during their global conference in Colombo from September 1-10 which is being attended by more than 21,000 Dawoodi Bohra members from over 40 countries.

As some 60,000 meals were being prepared daily, a Dana (Grain) committee including 6000 volunteers initially assessed the amount of food needed through data from RSVP apps and other web and mobile based platforms.

‘Today we fed an estimated count of 24,000 thousand people with over 3000 thaals. We have devised a method to see how much food one thaal might need and serve accordingly. Our leader Syedna Saifuddin is constantly teaching us not to waste food and understand that we live amongst a lot of communities and we need to respect everything especially our resources,’ Sakina Juzar, one of the volunteers told the Sunday Times.

Murtaza Sadriwala of the organising committee said, ‘We realised food wastage is one of the critical aspects we need to focus on, because there are so many people dying of hunger.’

Posters were put up in communal halls where meals are served to constantly reinforce the message of zero food wastage. Before every meal, a short announcement was made to remind attendees of the zero food wastage policy. The food is served on a thaal (a traditional large steel platter) and attendees are urged to take only what they required.

After the meal, committee members examine every thaal and consume any leftovers. Even the sufrah (a square piece of cloth placed under the thaal) is checked for any morsels left behind.

Any extra food is packed in containers and placed near the exit of the communal hall for members to take away. More leftovers are despatched to designated distribution areas for the homeless and needy.

Around 4000 kilograms of organic waste collected each day is sent to be converted into compost for farming communities. The 150-200 kg of polythene and PET bottles, 100 kilograms of plastic and cardboard were being recycled daily to ensure that none of it went into landfills.

The subsidiary Nazafat Committee in particular with their motto ‘Cleanliness is integral to belief’ (a saying taken from the Holy Prophet Muhammad SAW), ensured the waste was disposed to correct authorities

Plastic cups strewn all over, trash bins brimming with disposable plates and cups, leftover food and mountains of garbage – this is a common sight at any mass gathering. But in the last 10 days, when nearly 35,000 Bohra Muslims gathered in the city of Chennai to watch the live relay of the Dawoodi Bohra religious convention – Ashara Mubaraka, held at Husaini Masjid, Colombo – not a single grain of food was wasted. There was minimal use of plastic throughout the event.

Syedna Mufaddal Saifuddin, the spiritual leader of the international Dawoodi Bohra community, along with thousands of devout Muslims from around the world gather every year for 10 days to mourn the death of Imam Hussain AS – the grandson of Prophet Mohammed SAW who was martyred along with his family members and companions in Karbala. ‘We have a team that gathers data on the number of people and the time they would be arriving, and communicate the details with the kitchen team. Food is prepared accordingly and is served on a thaal (a traditional large steel plate for eight). Attendees are urged to ask only for what they require,’ said Abbas F Ragib, secretary, Anjuman E Mohammedi, Dawoodi Bohra Jamaat Trust. Since eight people eat food from the same plate, they ensure that there are no leftovers.

‘The thaals are made of steel and the cups in which we serve food are environmentally-friendly. At times, we are forced to use plastic spoons when there is a shortage, but we ensure that there is minimal usage of plastic,’ said Juzer N Haji, joint secretary, Dawoodi Bohra trust. Every night, milk and water were distributed to the passersby in paper cups and steel glasses. After the meal, committee members examined every thaal and consumed any leftovers.

Even the sufrah (a square piece of cloth placed under the thaal) was checked for any morsels left behind. Any extra food was packed in containers and placed near the exit of the communal hall for members to take away. More leftovers were dispatched to designated distribution areas for the homeless and needy. ‘This is something that anyone can follow. Also, by opting for recyclable vessels, we reduced water usage,’ said Juzer.