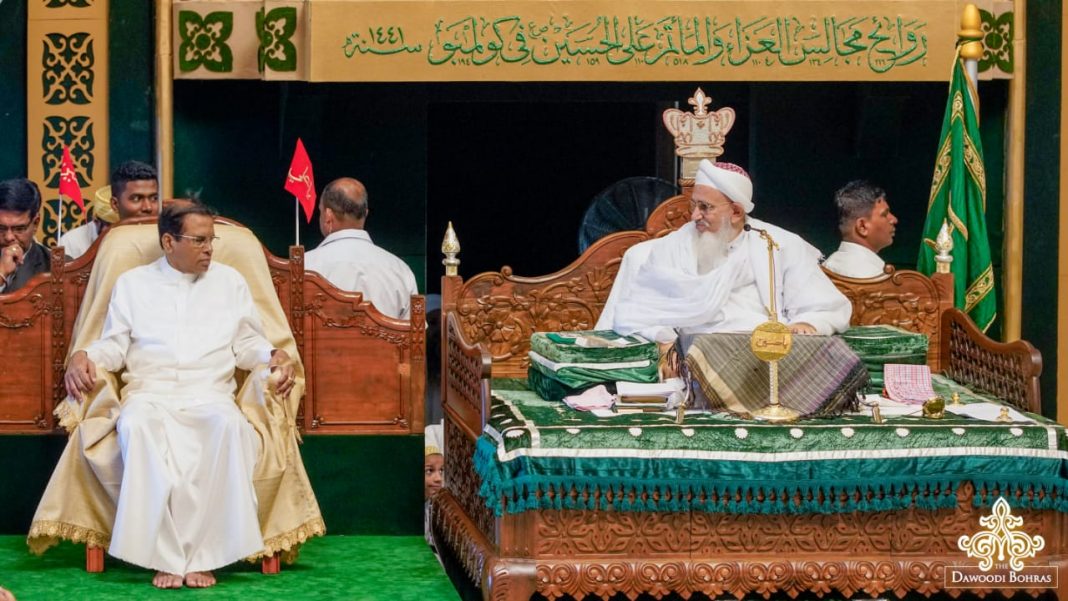 His Excellency Maithripala Sirisena, President of the Democratic Socialist Republic of Sri Lanka, called on His Holiness Dr Syedna Mufaddal Saifuddin, 53rd al-Dai al-Mutlaq and head of the Dawoodi Bohra community, during the fourth Ashara Mubaraka sermon in Colombo.

The President visited Husaini Masjid at Colombo 4 where he was warmly welcomed by Syedna, community dignitaries and the thousands who had gathered in the masjid complex. Syedna addressed the Honourable guest and welcomed him with the traditional Arabic greeting of salaam. He thanked the President, his government and its various departments for affording the community every assistance and support in making this Ashara Mubaraka congregation a success, while noting that his presence in their midst on this occasion was a matter of great pride and encouragement for the entire community.

He explained the purpose of the Ashara gatherings and narrated how Imam Husain AS sacrificed his life and those of his kin and companions for the salvation of Islam and the universal values of love and humanity. Syedna pointed out that the Serendib region was considered the birth place of Prophet Adam AS and that all of humanity had in common the fact they are descendants of Adam and thus linked in brotherhood.

In describing the importance of patriotism and encouraging the community to help people of all faiths and backgrounds, Syedna quoted the Prophetic traditions which establish love for country as an integral part of faith and quoted the Prophet’s SAW statement that all of creation is a family dependent upon Allah and those most beloved to Him are the ones who benefit His family the most. Syedna counselled community members, recalling his own father’s guidance, to always stay true to the laws of whichever lands they may inhabit and always strive for the betterment of humanity.

Both Syedna and the President referenced the recent terrorist attacks and expressed sympathy for the victims and their families while praying for a renewal of peace and harmony on this beautiful island.

The President then addressed the congregation saying that it was his good fortune to be a part of the Ashara Mubaraka sermons as he thanked Syedna for selecting Colombo as the venue for this year’s sermons. He saw it as a path to peace and the renewal of prosperity stating that the Ashara Mubaraka gathering alleviates some of the pain and hurt of those attacked.

‘The Ashara Mubaraka with its 21,000 plus gathering from all over the world is a milestone for Sri Lanka and we value and greatly appreciate the privilege you have accorded us in being the host country for this year’s convention. This I believe will be a part of the country’s history.’ he said

We are fully aware of the teachings of the Prophet Mohammad SAW who has always reiterated the message of peace and harmony and we are confident that the Bohra community’s message of peace will be an example to the entire nation,’ he added.

The President praised the community more than once for its peace-loving ethos and despite it being a small part of the Sri Lankan population he said that it had the love and respect of all Sri Lankans. From this small local community he could accurately infer the nature of Bohras all around the world. He expressed hope that the community will continue to contribute towards Sri Lanka’s progress.

The guests were then presented with traditional shawls as a gesture of honour and respect before they departed.