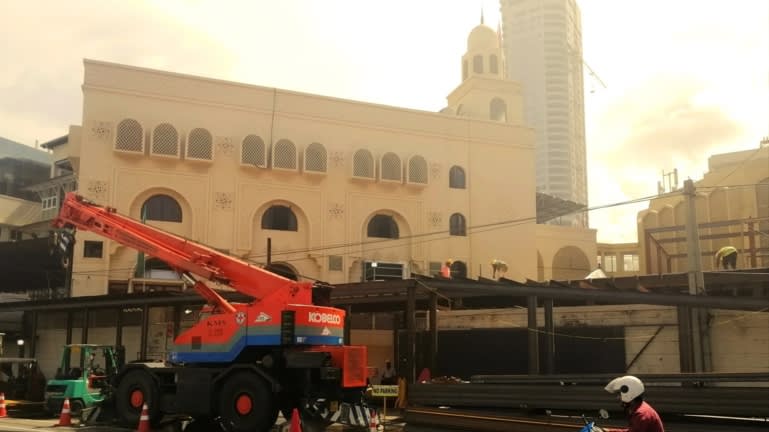 The Bohra Masjid in Colombo has become a hive of activity in recent weeks, its walls surrounded by construction equipment as the Dawoodi Bohra community prepares for the biggest international event to be held in Sri Lanka since Islamist attacks on hotels and churches killed more than 250 people in April.

The success of the sect’s annual Ashara Mubaraka gathering, which moves between different countries each year, will be of crucial importance to Sri Lanka. The country hopes it will trigger a revival of confidence in the safety of the island’s tourism industry, worth $4.4 billion a year. More than 200,000 people work in the hotel sector alone, with many more relying largely on visitors, including tuk-tuk drivers, restaurant workers and event organisers.

Tourist arrivals were down 46.9% in July from a year earlier, improved slightly from declines of 71% in May and 57% in June. Amid fears of further violence that could impact foreigners, the UN Convention on International Trade in Endangered Species postponed a global wildlife conference in Colombo from May to October. The Macau Football Association pulled out of a World Cup qualifying match in Colombo in June, forfeiting the game to Sri Lanka, out of security fears.

To revive tourism, the government has been holding promotional campaigns in the key markets of India, China and Europe and on Aug. 1 implemented free visas on arrival for six months for citizens of 48 countries. Major hotels have reopened buffets closed after the attacks and put together discount packages. Officials are also considering reducing aviation charges.

For 10 days from Saturday, all eyes will be on the Ashara Mubaraka assembly of the Dawoodi Bohra community, a sect within the Ismaili branch of Shia Islam. Near the Bohra Masjid stand police guards, part of a government security program intended to protect religious buildings from further violence and clamp down on a backlash against Sri Lanka’s minority Muslim community – 9.7% of the 21 million population – which has faced widespread discrimination since the bombings.

Gangs of Sinhalese Sri Lankans, sometimes led by Buddhist monks, vented their rage after the bombings by attacking Muslim-owned shops, vandalizing mosques, orchestrating a boycott of Muslim businesses and persecuting Muslim doctors and other professionals.

Around 21,000 Dawoodi Bohra devotees, including sect leader Syedna Mufaddal Saifuddin, who arrived Wednesday from India, are expected for the Ashara Mubaraka. The event commemorates the martyrdom of the Prophet Muhammad’s grandson, Husain ibn Ali, who died in battle in the year 680. Last year’s Ashara Mubaraka in Indore, India, drew an estimated 170,000 attendees.

Sri Lankan President Maithripala Sirisena and Prime Minister Ranil Wickremesinghe have made clear that the event is a top government priority, telling law enforcement agencies to ensure security for visitors and the sect’s 2,500 local adherents, who live mostly in Colombo and the northern city of Jaffna.

Mufaddal Adamjee, a Dawoodi Bohra spokesman helping coordinate the event, said the sect ‘is grateful to the government for its support in all aspects of planning and preparation leading up to the event and throughout.’

Kishu Gomes, head of the Sri Lanka Tourism Promotion Bureau, said the assembly is expected to generate visitor revenue of about $50 million. ‘The holding of the event in Colombo will also send a strong message to the rest of the world that Sri Lanka is safer than ever before,’ he said.

Sri Lanka last hosted the Ashara Mubaraka congregation in 2008, hosting an estimated 15,000 devotees. This year, devotees are expected from 40 countries as far-flung as the U.S. and Norway. Hotel rooms have been filling up fast in Colombo. ‘We had to turn down around 20 to 25 requests to book hotels, because all the hotels in Colombo were full,’ said Mark Devon, director of operations for tour company Green Voyages.

The key issue for Sri Lanka is combating its international image as a place of endemic religious strife by ensuring safety and security at the assembly and elsewhere in the country while it is underway. Jehan Perera, executive director of the think tank National Peace Council, said the government is trying to show the Islamic world that it does not see Muslims as a threat.

He noted that the government revoked emergency laws in mid-August. ‘This was to send a message to the international community that normalcy has been restored,’ Perera said. ‘This large-scale event will re-instill international confidence in Sri Lanka as a safe destination for tourists.’

Adherents of the Dawoodi Bohra sect will not be the only people in Sri Lanka hoping that the calm of the Bohra Masjid is maintained.