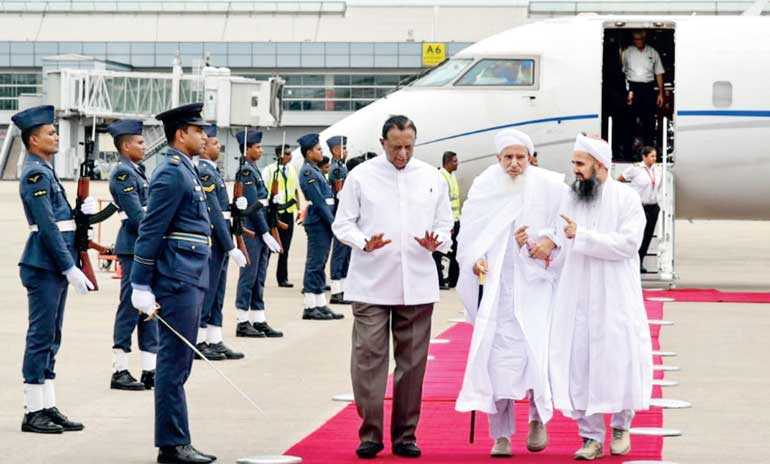 Dr Syedna Mufaddal Saifuddin, the 53rd al-Dai al-Mutlaq and head of the Dawoodi Bohra community arrived in Colombo yesterday to conduct the Ashara Mubaraka sermons in the city. He was received at the airport by Cabinet Ministers, Government officials, and members of the community.

Syedna Saifuddin TUS arrived at Burhani Park where thousands of Dawoodi Bohras accorded him a warm welcome. Syedna TUS addressed the audience briefly, and thanked the Sri Lankan Government, especially President Maithripala Sirisena and Prime Minister Ranil Wickremesinghe for inviting him as a State Guest to Colombo. He also acknowledged the warm welcome and the arrangements made for his visit and the overall Ashara Mubaraka congregation. His Holiness TUS counselled community members to always remain loyal to their homeland and prayed for peace, harmony and prosperity in Sri Lanka.

During his stay in the city, he will also interact with local community members and look into their affairs. Senior Government officials of the country and leaders of other faith communities are expected to meet with Syedna and discuss topics pertaining to the betterment of the city and society at large.

Ashara Mubaraka refers to a period of ten days at the beginning of the Islamic year, dedicated to the remembrance of the Prophet Mohammed SAW and his Ahle Bayt AS (family and kin), specifically his grandson Imam Husain AS. The tenth day of Muharram, the first month of the Islamic calendar, is known as Ashura, and marks the day on which Imam Husain AS was martyred, along with his family members and companions. This year the event will run through the 31st of August to the 9th of September.

The commemoration of Imam Husain’s AS martyrdom is an important element of the Dawoodi Bohra faith. During Ashara Mubaraka, Syedna Saifuddin will conduct a series of sermons over the nine days that explore themes of justice, sacrifice, brotherhood, forgiveness, kindness and piety: qualities that manifest themselves in the tragedy that befell Imam Husain AS and his loved ones in Karbala, Iraq. In his sermons, Syedna will demonstrate the relevance of these eternal principles in various contemporary contexts.

Although Dawoodi Bohra centres across the world will host this event locally for members in their cities, the gathering led by Syedna Saifuddin TUS, which varies from city to city each year, will attract thousands of community members. In Colombo this year, about 21,000 guests from over 40 different countries are expected to attend. Hotels and apartments in and around the Bambalapitiya area, where the central Husaini Masjid is located, are completely booked. Community members in Colombo will open their homes to foreign guests, many of whom they’ve never met before. Bus companies have been hired to ferry attendees from different parts of the city. Over the course of the nine days, hundreds of thousands of meals will be served, all in the name and love of Imam Husain AS. ‘Thousands of volunteers from the global Dawoodi Bohra community have started to arrive in Colombo to help with the preparation of various venues. These teams are experienced in planning aspects of flow management and coordination required to ensure that such a large event runs smoothly and efficiently,’ shared local PR coordinator Mufaddal Adamjee. ‘Our teams are mobilising services and coordinating with local authorities regarding matters such as traffic and sanitation in order to minimise inconvenience to our neighbours,’ added Adamjee.

Colombo is home to a Dawoodi Bohra community numbering around 2500 members. The Bohras in Sri Lanka, like the community at large, are mostly businessmen and traders. Of the four Bohra Masjids in Sri Lanka, Husaini Masjid in Colombo is the largest, and will be the centre for this year’s Ashara Mubaraka sermons. After many years of preparatory work, Colombo was finally chosen as the venue for this year’s Ashara Mubaraka, an honour it has had six times in the past. The last occasion was when Syedna Saifuddin’s TUS father, the late Syedna Mohammed Burhanuddin RA conducted the sermons here in 2008. This will be the first Ashara Mubaraka for Syedna Mufaddal Saifuddin TUS in Sri Lanka after his ascension to the leadership of the community. As the head of the community, he has so far conducted Ashara sermons in Surat, Houston, Dar es Salaam, Karachi and Indore.