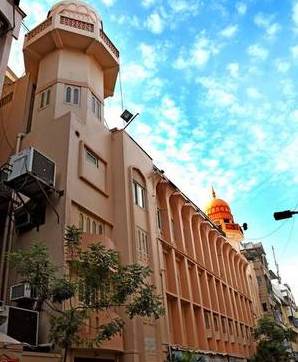 ‘Our main dish is dal chawal palida, and not biryani,’ laughs Tasneem Kutubuddin. Tasneem is documenting the Dawoodi Bohra Muslim community, and will be leading a walk titled ‘Understanding The Bohras In The City.’

‘It is in fact a vegetarian dish and is cooked on festive occasions. Since our ancestors were migrants from Gujarat, the Bohra Muslim cuisine sees a lot of influence from there. Kadi khichdi is another comfort food we learnt from the Gujaratis,’ she explains.

The two-hour walk will have nuggets of information such as these, peppered with the history of this community, and stories on how they made Chennai home.

We meet outside the Mohammedi Masjid in Angappa Naicken Street, George Town, for a preview. Tasneem opens with a brief introduction. ‘Chennai has three Dawoodi Bohra masjids; this is one, the other is Saifee Masjid built by Mulla Jafferji Ibne Mulla Ismailji and the third is in Basin Bridge,’ she says.

The community first settled around this area. ‘In 1790, Ismailji came to Arcot from Surat, in search of a job. His uncle, Sheikh Ahmed Ali, helped him set up a bangle business. Eventually, he moved from Arcot to Madras in 1793 and set up a garment business,’ says Tasneem.

Being a trading community, members were encouraged to buy land. ‘Jafferji then bought a piece of land and built Saifee Masjid in 1803, the first masjid in Moore Street,’ she explains. ‘Sheikh Ahmed Ali’s grave — built in 1797 — lies in the cemetery behind the Mohammedi Masjid and is the oldest Bohra grave in the city. Jafferji died in 1815 and is buried here as well.’

Our other stops include a school, a glitzy sports complex (with facilities for cricket, football, basketball, volleyball, and table tennis), a 109-year-old shop, a number of food spots and Masjid-e-Saifee.

Men dressed in the traditional kurta, saaya, izar with topi are leaving the pastel peach complex. A community kitchen, attached to the masjid, started in 2015. ‘Around five years ago, our religious head, Syedna Mufaddal Saifuddin TUS said that we must free women from the kitchen. So this kitchen makes lunch for the entire Dawoodi Bohra community across Chennai, everyday. This rule is applied across every city and every country.’

The menu varies from rice, dal, vegetables and meat, to chinese or even pani puri. ‘People send their tiffin carriers and each one is numbered. Once the tiffins are delivered, people pick their carrier and replace it with an empty one for the next day. It’s all well organised.’

The community in Chennai is 8,000-member strong, consisting of approximately 1,800 families, says Tasneem.

Growing up in Parry’s Corner, near the Masjid, she has seen the area change. ‘I saw the China bazaar disappear. I have seen buildings and old houses being broken down, paving way for newer structures, companies and establishments changing hands, and more and more Bohras settling here to earn their livelihoods,’ she says, adding, ‘The essence of Moore Street, however, has remained largely the same.’