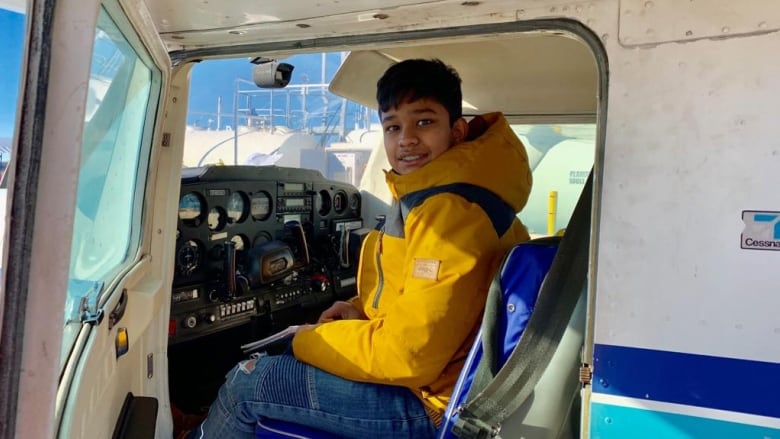 Most mornings, Mohammed Faizy’s first question to his mom after he wakes up is a variation of, ‘Mom, can I fly today?’ Jumana Faizy looks at her teenage son, who is beaming when he hears her recount this story. ‘You can see all the roads, you can see farms, you can see everything,’ he said. ‘It’s amazing.’

He is still two years from legally learning to drive, but he’s hoping to become the youngest person ever to fly a plane alone. Unfortunately, poor weather scrapped a December 12th flight at the Brampton Flying Centre, where he takes his classes. But just over a week later, on December 18th, Faizy completed a solo flight he’s now hoping will earn him a world record.

Mohammed caught the flying bug when he was nine. His older sister, Zahabia, who got her private pilot’s licence at 17, took him for a ride. At 12, he got his hands on a flight simulator. That same year, he persuaded his mom to get him flying lessons. ‘I’m not scared. I see the confidence on his face,’ said Jumana Faizy. ‘I don’t know why I’m not scared like other moms.’ In fact, she says she’s more proud than anything, having two young pilots in the family. She says she felt better after asking her son what happens if the plane falls.

‘He laughed and said, Mom, it doesn’t happen that way. The plane never just falls,’ she said. ‘After that, I’m satisfied.’

Soon after his first time in the air, Mohammed decided he wanted to be a commercial pilot. But not just any commercial pilot. He wanted the title of youngest person to fly a fixed-wing aircraft solo. Guinness World Records has told him to upload a video of the event and apply after. The record is currently held by Jonathan Strickland, from Inglewood, California, who became the youngest person to fly solo in June 2006. He did it in Vancouver because you have to be at least 14 to pilot a plane alone in Canada. The age limit is 16 in the U.S. Faizy, who turned 14 on December 12th is eager for his first solo flight aboard a Cessna 152. ‘There’s not going to be any instructor helping me, but I’m ready. I know I can do this,’ he said. Mohammed has booked flights for every day the rest of the week, just in case.