Members of the Dawoodi Bohra Community organised a National Day Observance Ceremony at the Burhani Masjid in Singapore to commemorate the nation’s 54th National Day and 200 years since the founding of modern Singapore as well as Eid al-Adha.

The Singapore Dawoodi Bohra Community was honoured to welcome Mr Teo Ser Luck who is a Member of Parliament and former Minister of State and Mayor as well as representatives from the Islamic Religious Council of Singapore (MUIS) to join them on this special occasion.

The ceremony started off with the National Flag being ceremoniously brought in and placed at the front by members of the fire safety team who then saluted the flag as the National Anthem was sung. The Singapore Pledge was then recited by all. 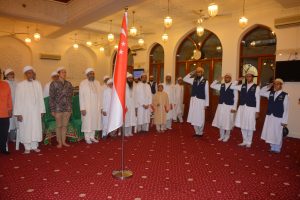 His Holiness’ representative to Singapore then read out a special message from His Holiness to mark the occasion in which he fondly recalled his trip to Singapore last year and his meeting with the President, Madam Halimah Yacob.