Self-help is the best form of help, and the Dawoodi Bohra Community has elevated this thought to a whole new level through its community kitchen.With inputs and information gathered by Moiz Qutbi, Yo! Vizag brings you the details.

The association of the Dawoodi Bohras, with Visakhapatnam, dates back to over 45 years when they decided to relocate here primarily as businessmen. From 2006 onwards, they largely started settling in Yendada, owing to the vicinity to their Masjid. Till date, around 130 families live in Yendada while 40 of them stay within the city.

They have been following the tradition of running, and maintaining a community kitchen since 2011. Operated by a selected group of people from the community, this global concept involves regular planning of meals, cooking and sharing of food. This concept was initiated in 2011 under the guidance of late Dr Syedna Mohammed Burhanuddin Saheb, the 52nd Dai (spiritual leader of the community). For the 12 lakh Dawoodi Bohras, around the world, this initiative is known as the ‘Faiz al-Mawaid al-Burhaniyah.’

In Visakhapatnam, work at the kitchen begins early in the morning at 3AM, as a wide variety of food is prepared and delivered to every household of the community on a daily basis. Following a monthly menu designed by a special committee, to ensure health and variety, the food is readied by 6 AM. By 7 AM two teams dispatch the food, to Yendada and other parts of the city. Each household keeps two sets of tiffin boxes that are used on an alternate basis. 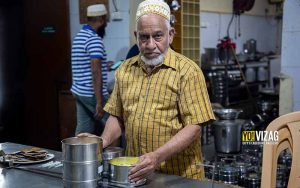 As is the case with most initiatives, starting the kitchen had its initial hurdles. Finding the right cooks, sorting logistics, monetary support were elements of the system that needed attention and were soon streamlined.

A smart kitchen was set up and cooks were brought to Visakhapatnam on a contractual basis from Kolkata. The funding was also in place as everyone, within the community, contributed towards the kitchen. The underlying concept being that one isn’t just paying for himself but also for another fellow Dawoodi Bohra member’s food. This defined how one would serve food every day, in line with the community philosophy.

Regardless of economic status, all members of the community are provided the same food. This strengthens the notion of equality and disfavours differentiation. As an additional advantage, women have more time on their hands to concentrate on their family businesses, livelihood or to pursue hobbies. Many of them have already ventured into businesses such as interior design, catering, jewelry design, stitching, embroidery works, home tuitions, selling masalas, and chutneys and bakeries. Some of them even prepare rotis for the kitchen and are paid for their services in return. These initiatives are supported wholeheartedly as members not only uplift themselves monetarily but spiritually as well.

Not just this, the kitchen also feeds people outside the community. During the Cyclone Hudhud period in Visakhapatnam, when the entire city was battered and essentials had become scanty, the kitchen served food and helped others from the very next day. With no electricity, members contributed all perishables, which were then used at the community kitchen to feed people.

At the end of a regular day, all the leftover food is packed and distributed among the poor and needy. This keeps in line with the zero food wastage policy that the community practices. Also, there is the overall thought that anyone who approaches the kitchen in search of food is never sent away hungry. 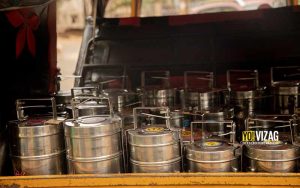 Feeding the hungry is considered to be the best form of service by many. As the Dawoodi Bohra Community does its bit towards this end, the light of humanity and caring shines brighter in the city.