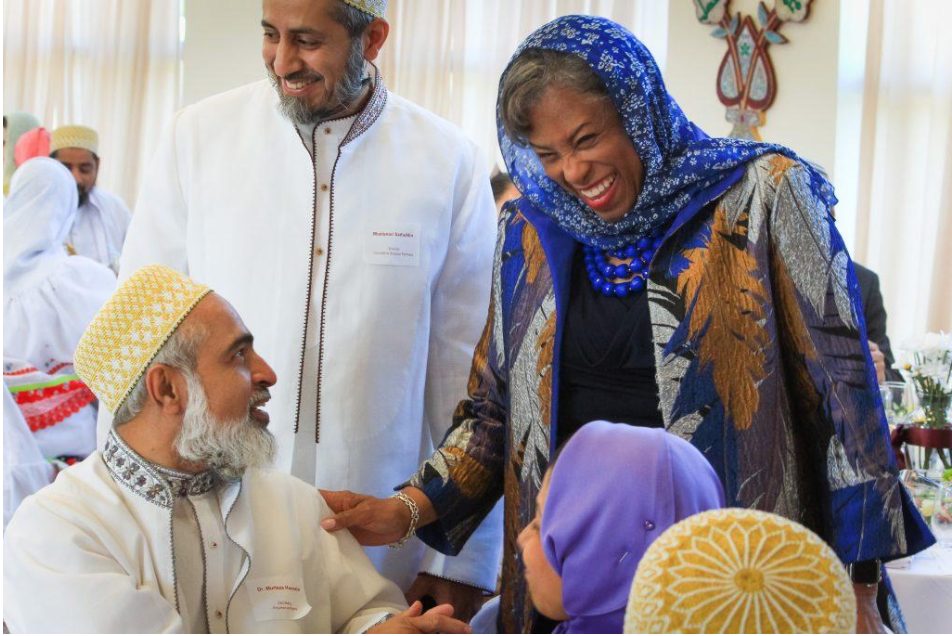 The Dawoodi Bohras in Farmington Hills, Detroit, hosted a gathering of esteemed guests on Friday 7th June in celebration of Eid al-Fitr, which marks the end of the holy month of Ramadan. The Dawoodi Bohra Muslims are renowned the world over for their culinary skills, and the Detroit community was delighted to have the opportunity to share a traditional Bohra meal with local friends and neighbours, and to impart a multi-faith message of unity and peace.

Ramadan is a month of reflection and prayer, marked by meals with friends and relatives, and the exchange of gifts. The celebration of Eid is often a time when Muslims open their doors to neighbours of all religions, an occasion to celebrate all faiths and humanity.

On display throughout the evening was a ‘Youth United Mural’ created by young adults from local Muslim, Christian and Jewish communities, and each guest went home with a beautiful flowering plant as an illustration of unity and peace.

Speaking on behalf of the Dawoodi Bohra community of Detroit, the local representative of His Holiness TUS said, ‘We are a community known for our commitment to our faith, education, and service to society. For example, we are involved with the Farmington Interfaith Association, and our youngsters continue to be of service to their community via initiatives like Youth United and C.A.R.E.S, an upliftment project in south east Michigan supported by young Muslims, Christians and Jews.’

Guest of Honor, Congresswoman Brenda Lawrence, said, ‘A community is only as strong as the neighbours who live there. The Bohras have used their voices to make progress on countless issues including gender equality and the environment. As a country we must continue to work together to strengthen the ties of our communities because no one should be turned away because of religion, race, gender or culture.’

The evening culminated with a traditional Dawoodi Bohra dinner, followed by a tour of the newly-built masjid in Farmington Hills.