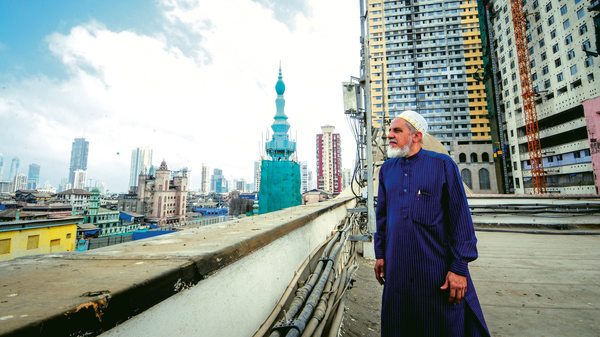 It is an intricate dance that takes place between scooterists, goats and pedestrians on the streets of Mumbai’s Bhendi Bazaar. A slow starting Ramadan morning carries a patina of construction dust and even a first time visitor can see this is a neighbourhood in a state of flux.

Munaf Kapadia, founder and CEO of The Bohri Kitchen (TBK), a specialist food startup focusing on Bohri food, is our guide for the day. His familiarity with Bhendi Bazaar (also known as Bohri Mohalla due to its large concentration of Dawoodi Bohra Muslims) comes from years of wandering through its warren of lanes and interactions with friends and family who live here—his mother grew up here and his father still runs a shop a few streets away.

According to him, this is a good time to visit, as the neighbourhood stands on the cusp of major change. ‘Many of the old structures are already in the process of being torn down and by next year this place will look entirely different.’

Bhendi Bazaar is over a century old and its name is a colloquial version of ‘behind the bazaar,’ a term used by the British to identify this area behind Crawford Market. Set up as a migrant camp for labourers working at the Mumbai docks, it expanded gradually to accommodate traders who set up all manner of businesses. The neighbourhood’s infrastructure developed according to the needs of the day. Chawl style housing was created to cater to the largely male populace, but, as Bhendi Bazaar grew, both in terms of wealth and opportunities, people began to settle here with their families.

Dawoodi Bohras migrated from Gujarat and Yemen throughout the 20th century. Apart from the existing mosques, the building of the Raudat Tahera in the 1960s—the mausoleum of the religious leaders of the Dawoodi Bohras, Syedna Taher Saifuddin RA and Syedna Mohammed Burhanuddin RA—turned this place into a pilgrimage centre. Soon, Bhendi Bazaar came to be identified as a temporal as well as spiritual home for the Bohras.

Later, the pagdi system (a model in which tenants effectively become part owners of rent controlled properties) left landlords with no incentive and residential buildings gradually fell into disrepair.

But now a massive inner city redevelopment project spearheaded by the Saifee Burhani Upliftment Trust (SBUT) promises to change the face of Bhendi Bazaar. This project which was initiated in 2009 and construction work finally began in 2016, was envisioned as a philanthropic enterprise by the community’s spiritual leader, the late Syedna Mohammed Burhanuddin RA. The idea was to improve the community’s living conditions and modernise the neighbourhood while keeping the people and their culture at the centre of the plan.

It is hard to understand the cultural context of this mohalla (neighbourhood) without actually visiting a Bohri building. So our first stop is Lehri Palace, an old residential building in Null Bazar.

‘Nobody closes their doors in Bohri buildings,’ says Kapadia, as he takes us up the stairs to meet his friend, Taikhoom Nadeem. We walk past the one room units that make up the four storey Lehri Palace, and, true to form, the doors are wide open. Neighbours walk in and out of each other’s rooms with an easy familiarity. This is one of a handful of relatively well preserved residential blocks in this area where almost every second building is a crumbling edifice.

Nadeem, 63, lives in a tiny 200 sq. ft apartment but his idea of ‘home’ encompasses all of Lehri Palace. Here, every neighbour is like a family member. A young girl ambles down the corridor holding a pan of fried eggs, offering them to whoever passes by, while a lady invites us in to have a cup of tea. Lehri Manzil is a microcosm of the larger Bohri Mohalla and an insight into what this community life means for its residents, ensuring they stay there despite the obvious problems of overcrowding and poor infrastructure. Kapadia explains that these kinships are important to the Dawoodi Bohras. ‘Within the community, the neighbours have your back and look after each other,’ says Kapadia.

We ask Nadeem why he doesn’t move to another area and he answers simply: ‘I just cannot. Here we are in the middle of Mumbai and everything we need is right here. My soul is connected to this place.’

However, it is also true that Bhendi Bazaar is coming apart at the seams. During the monsoon of 2017, the 100 year old Hussaini Building collapsed, killing 33 people and injuring a few. There are numerous buildings in the area with foundations held together by bamboo stilts and other makeshift support.

The proposed redevelopment of this mohalla by SBUT will cover 16.5 acres, further divided into seven clusters. Over 250 decaying residential buildings and 1,250 shops will be replaced by mixed use residential and commercial towers. It’s an ambitious plan, and will obviously change the texture of the neighbourhood.

Kapadia, who has been following the project, is rather hopeful of the outcome. ‘I believe this entire ecosystem will get upgraded. While a certain part of the old culture might get eroded, I think the people who live here are willing to pay the price. It’s people like us who visit once a week who will miss the old charm more than those who live here and want the lifestyle change.’

Life and times in a bazaar

This is a neighbourhood of stories. India’s most wanted gangster, Dawood Ibrahim, lived here once, as did some of the greatest qawwals of Mumbai, like Aziz Naza, who broke all records with his song Jhoom Barabar Jhoom Sharabi. While the area had a varied demographic to begin with, at present it has a Muslim majority, with a large concentration of Dawoodi Bohras.

Today, Bhendi Bazaar is a motley assortment of shops, with similar names indicating the age old politics where family businesses are divided between different branches. A case in point is Shabbir’s Tawakkal Sweets, which is different from the other Tawakkal shops in the area. Run by Moayyad Mithaiwala, the third generation owner, this sweet shop continues to maintain the high standards of his predecessors. According to Kapadia, they make the best phirni in town and a delicious confection called the mango malai.

Shabbir’s Tawakkal is one of the shops that awaits relocation. At the moment, 80 shops from the area have been shifted to al-Saʿāda, the first of two buildings in the project nearing completion. The complex is expected to house 614 families and 120 shops.

Imdadiya Bakery is one of the first to have moved in. Despite a shiny new home, this legendary bakery continues to roll out its old school snacks, possibly a sign of things to come for the rest of the shops of the area.

With Kapadia as our guide, Bohri Mohalla’s food offerings are hard to ignore. ‘In Bohri cuisine, there are very distinct dishes within the different courses, from sweets to main courses,’ he says. And different shops in the neighbourhood specialise in very specific items.

One such institution is Taj ice cream, which started in 1887. Their speciality is sancha ice cream. Milk, fruit and sugar are hand-churned in a traditional copper sancha (metal mould) encased in a wooden bucket packed with ice. No preservatives or essences are used. ‘The sancha ice cream is very specific to Bohri cuisine,’ says Kapadia.

It is run by Aamir Hatim Icecreamwala, the sixth generation owner of this outlet who continues with the traditional methods. However, he has given the brand a 21st century tweak—there is ‘artisanal’ in its tag line and the business has expanded into neighbourhoods like Bandra and the Bandra Kurla Complex.

A minute’s walk from Taj ice cream and we are at Pakmodiya Street, the undisputed food street of Bohri Mohalla. Since it is the month of Ramadan, preparations for the evening feast have started. Though Kapadia says the street food is not what it once used to be, there are still some gems to be found. ‘Some of the specialities here can be found in the small restaurants in the area rather than the street stalls,’ he says, pointing out some famous places, like the Jilani Fast Food Corner and Surti 12 Handi. While the former is known for its meat and offal stuffed rolls, the latter offers a selection of 12 curries featuring everything from mutton paya to the tail.