In addition to the BFI initiative ‘Turning the Tide’ against plastic pollution, which has gathered great momentum since its launch and engaged community members from all walks of life in the cleanup of Mithi River and Dana Pani Beach, a second BFI initiative named the ‘Reforestation and Environmental study Drive’ is also currently underway in Rajmachi.

In line with the BFI’s core philosophy and founding ideology, the drive is intended to foster a deeper appreciation of nature and thereby inspire community members and the broader public to give back to nature and make certain that natural ecosystems not only survive but thrive.

Although intended primarily as an educational exercise for students, the drive is open to all nature lovers regardless of age.

Located in the Western Ghats, Rajmachi is a popular destination for nature lovers, trekkers and outdoor campers. The area is a biodiversity hotspot and has an abundance of flora and fauna to explore. Mr Sushil, one of the botanists helping BFI with the project says, ‘what we are trying to do through our reforestation drive is reintroduce the plants which were there long ago but disappeared as a result of neglect and poor treatment at the hands of humans. We are trying to bring back the primary forest, which in turn will bring back birds and animals that call the forest home.’

Since its inception, a total of 1000 indigenous medicinal plants have been planted as a result of contributions from numerous educational institutes such as Raudat al-Quran, covering a total of 3.5 acres of land near Rajmachi village. This was phase one of the project.

The site is now being developed to start ‘Eco Tourism’ and ‘Environmental Study’ tours, for which BFI has hired expert botanists, wildlife experts, and wildlife survival instructors. The first batch of eco tourists came from MSB Pune. Some of the activities they enjoyed include: 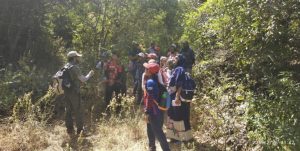 In his speech inaugurating the BFI, His Holiness Dr Syedna Mohammed Burhanuddin RA emphasised the need to address India’s environmental concerns as well as those of world at large. The bounties of Nature are a gift to humankind which they are duty bound to preserve and protect.

The ‘Reforestation and Environmental Study Drive’ is yet another step towards realising the vision of His Holiness TUS and inspiring future generations to wholeheartedly take up the cause with vigour and dedication.