Colombo, The Sri Lankan State Minister of Finance, Eran Wickramaratne, has lauded the Bohra community’s leadership in the development of entrepreneurship in the island nation.

Inaugurating the Bohra Business Expo 2019 at Hotel Sapphire here on Saturday, the banker turned political leader said that the Bohras have been a ‘big catalyst’ in the development of entrepreneurship in Sri Lanka.

Wickramaratne said that entrepreneurship is the crying need of the hour given the parlous state of Sri Lanka’s finances, and the sharp drop in the share of revenue in the country’s GDP. 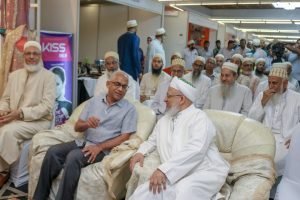 In this respect, Sri Lanka has been lagging behind other developing countries in Asia such as Vietnam and Thailand, he pointed out.

Earlier, giving a brief introduction to the Bohra Business Expo 2019, Moiz Mustafa said that the current expo is the third in the series organised to promote small and medium enterprises among the Bohras, a business community which came to Sri Lanka in the 18th century from Gujarat in India.

Since then, the community has been trading and living in harmony with other communities in the island.

The basic aim of Bohra Business Expo 2019 is to empower young Bohras, including women, through the promotion of an independent entrepreneurial spirit among them. Mustafa urged the government to draw up schemes to promote small and medium enterprises.

The Bohra Business Expo 2019, attracted a number of entrepreneurs who displayed and sold their products, many of which were homemade. In the lead were women entrepreneurs. Their products ranged from food items to homemade cosmetics using natural ingredients.

Arwa Mohammed of ‘Tresor’ displayed an array of silver and stone jewelry designed and made by her. Arwa is a qualified dentist, but designing and making jewelry is both her hobby and business. Jumana and Zainab displayed fresh, handmade, all natural bath and body products. They said that they could also meet any individual customer’s needs.

Farida Mansurali, a caterer, was selling mouth-watering Bohra dishes. Ali Asghar A. Mohammedali’s outlet ‘Frutti Natural’ made it a point to tell the visitors how they use only the finest and purest of natural ingredients to make their wide range of ice creams and sherbets. ‘The flavor is in the fruit. It’s uniquely delicious!’ they said.

Munira and Kubra are specialists in Mehendi, a kind of body art which is an essential part of bridal make up in Hindu and Muslim weddings in India and Pakistan.

Rashida Hussain, offered a totally different service. She is an ‘Educational Consultant and a Life Skill Coach.’ With an Indian and American qualification, Rashida helps clients improve their prospects in life. ‘We help clients take the next step forward,’ she explains. Clients could either join groups or seek individual attention, she added.