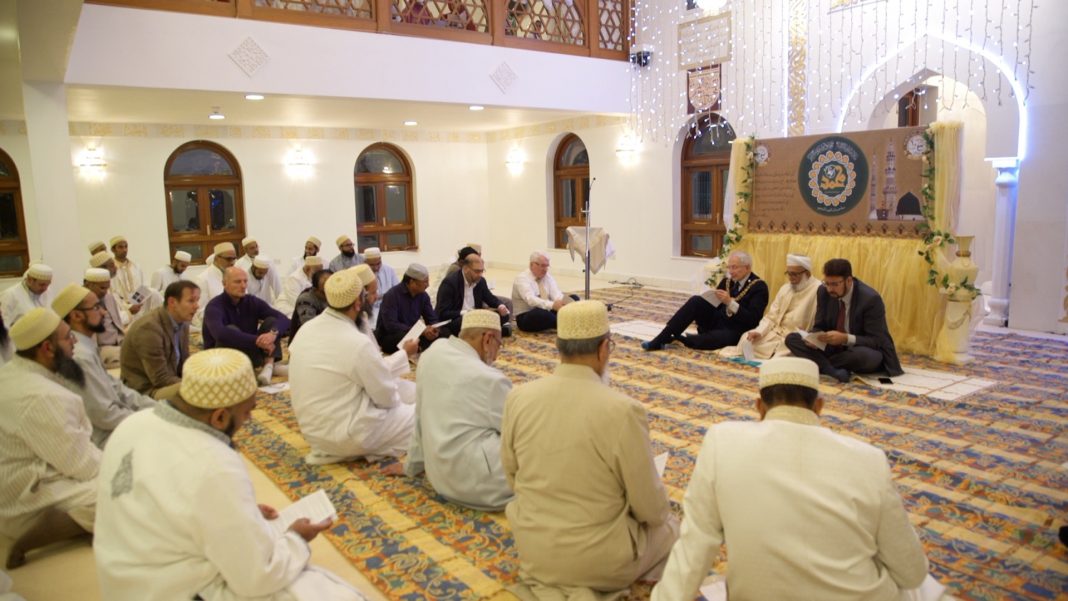 Dawoodi Bohras of Noor Masjid in Levenshulme, Manchester, invited local Christian communities to a joint celebration of the joyous birthday of Prophet MohammedSA, which this year fell on 29th November, and Christmas – the birthday of the Messiah, JesusSA, traditionally commemorated on 25th December.

The event was held at Noor Masjid, Levenshulme, and was attended by the Lord Mayor of Manchester, Councillor Eddy Newman; Rt Hon Afzal Khan CBE, Shadow Immigration Minister and MP for Manchester, Gorton; and Canon Martin Miller, Director of the Diocese of Manchester. Local councillors, heads of schools, heads of local churches and other distinguished guests joined the Dawoodi Bohra congregation for the celebrations, done in traditional Islamic way.

Upon arrival, all guests were given a booklet with the verses of the Quran and poems in Arabic with translations in English for them to follow which was well received.

Dr Zainul Abedin Kapacee, a member of the Dawoodi Bohra congregation, first spoke in honour of both prophets and highlighted some of the common teachings in Islam and Christianity.

The Lord Mayor praised the community for being an example of the bond that exists between different peoples in the city of Manchester. He said that one of his predecessors had the honour of inviting and hosting the previous head of the community, Syedna Mohammed Burhanuddin to Manchester in 2008, and said he would be honoured to similarly welcome the current head, Syedna Mufaddal Saifuddin to the city.

He reminded people how the peace of the city had been shattered a few months ago with the bomb blast in the Manchester Arena, but said that the city dwellers came together to work in peace and harmony. He praised the Dawoodi Bohra community for its contribution in this regard and said that this function was an example of how the community builds an understanding between faiths and fosters peace and harmony. He praised the architecture of the mosque and called it a magnificient contribution to Manchester’s landscape.

Rt Hon Afzal Khan MP said that the three Abrahamic faiths shared a common heritage and common beliefs and that this function was an example of how this city comes together for each other. He said he was privileged to be involved in the journey of the building of this mosque, and said he cites this beautiful mosque and its people to others as ideal examples. He commended the community for its activities in reaching out to others and its contribution to the area and said that he was proud to be an MP of the ward where such a beautiful mosque sits and community lives.

He remarked that advances in technology were such that a photo of him being at this function was already sent to him from Pakistan, modern technology had helped to connect us all and bought people separated by geography and faiths closer together.

Canon Martin Miller recalled his previous visit to the mosque 9 years ago when he had accompanied Bishop Mark Davis to welcome Syedna Mohammed Burhanuddin to the city, the night before the inauguration of the mosque, and he said that 9 years later, the mosque was just as magnificent as ever. He conveyed the greetings and best wishes of the Bishop of Manchester, and his two assistant bishops who he said would have loved to be at the function, but due to the time of the year, their diaries were extremely busy. He also echoed the other speakers about the wonderful diversity of the city of Manchester, and that this function celebrating the birthdays of the great Prophet Mohammed and Christ jointly exemplified exactly that.

Manchester Amilsaheb (head of the local Dawoodi Bohras) presented a cheque for £5,300.00 to the Lord Mayor for his charity “We love Manchester” on behalf of Syedna Mufaddal Saifuddin, 53rd Dā’ī al-Mutlaq, head of the Dawoodi Bohras.

The guests were then escorted to the 2nd floor to view an exhibition on Dawoodi Bohra history and culture and a separate exhibition on Imam HusainAS, explaining his sacrifice, and how the Dawoodi Bohra community commemorated his martyrdom in the first 10 days of Moharram (the first month of the Islamic calendar) every year. Thereafter, a traditional Dawoodi Bohra meal was served.

The Dawoodi Bohras have played a significant role in the local community for many years. Levenshulme is a place where races and religions have always lived in harmony. The event allowed Dawoodi Bohras to add to this culture of love and respect for people of different faiths and communities, and gave them an opportunity to spread the message of peace and harmony in Manchester.